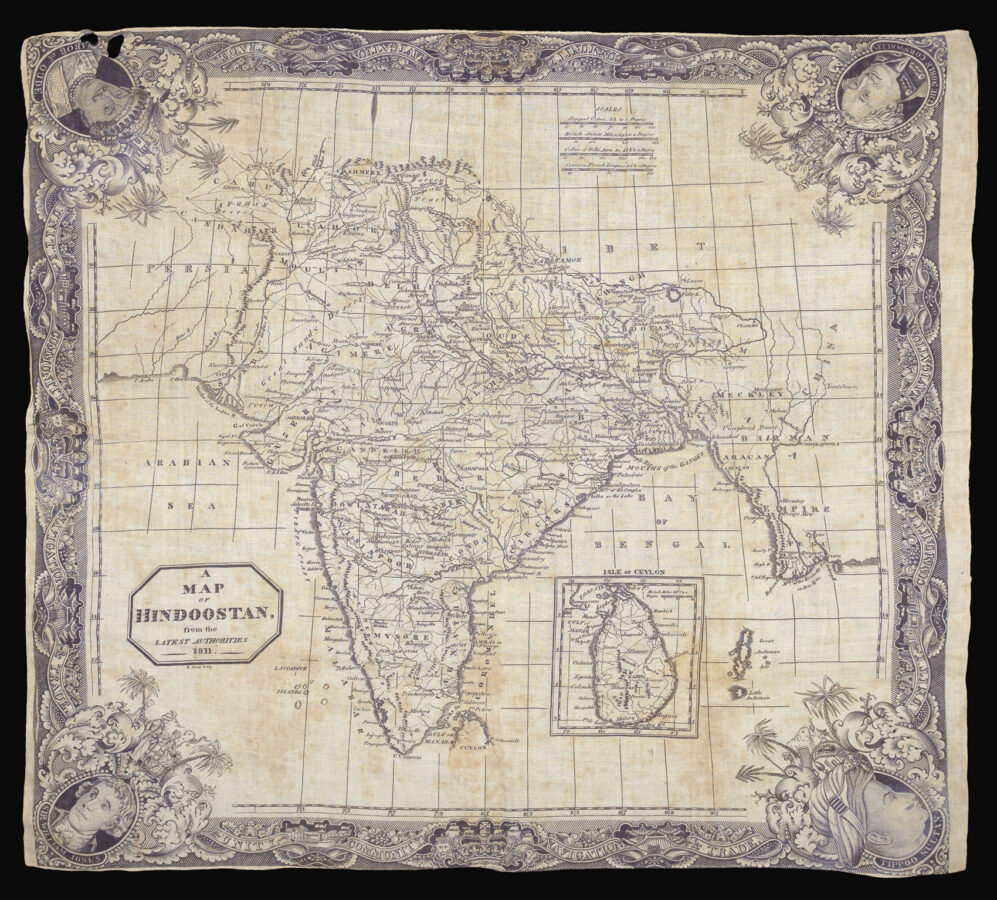 A Map of Hindoostan, from the Latest authorities 1811.

An unrecorded Georgian map of India, extolling the benefits of the trade and cultural links between England and India.

The map is based on John Cary’s ​‘A New Map of Hindoostan, from the Latest Authorities’, published in his ​‘Universal Atlas’ of 1806. The mapshows territorial boundaries, towns, roads, and rivers; however, unlike Cary’s map, the present example is surrounded by an elaborate border.

To each corner are portraits of four leading British and Indian figures: lower left is Sir William Jones (1746–1794) Anglo-Welsh philologist, and scholar of ancient India, particularly known for his proposition of the existence of a relationship among European and Indian languages, which would later be known as Indo-European languages; lower right Tipu Sultan (Tippoo Sultan) the ruler of Mysore (1782–1799), who resisted the East India Company’s incursions during the Second and Third, and Fourth Anglo-Mysore Wars; Lord Cornwallis (1738–1805) the Governor General and British Commander-in-Chief of India from 1786–1792, a role he would again take up in 1805; and Wazir Ali Khan, Nawab of Awadh (or Oudh), who was involved in what became known to the British, as The Massacre of Benares; a minor and unsuccessful insurrection at Benares in northern India in 1799, in which five British East India Company officials and civilians were killed. The uprising was unsuccessful and resulted in his imprisonment for the remainder of his life.

Between the portraits is a banderole with text: ​“Unity, Community, Navigation & Trade”, together with the Royal coat-of-arms; what appears to be, somewhat incongruously a Chinese Junk, and a Chinese pagoda. The border completely glosses over the various wars, that saw Tipu Sultan killed, and Wzir Ali Khan imprisoned, in order to celebrate the opportunities of unity and trade with Britain’s latest territorial acquisition.

The map is engraved by Robert Gray (fl1804-1848), an engraver, lithographer and copperplate printer active in Glasgow.

We are unable to trace another example of the present map.