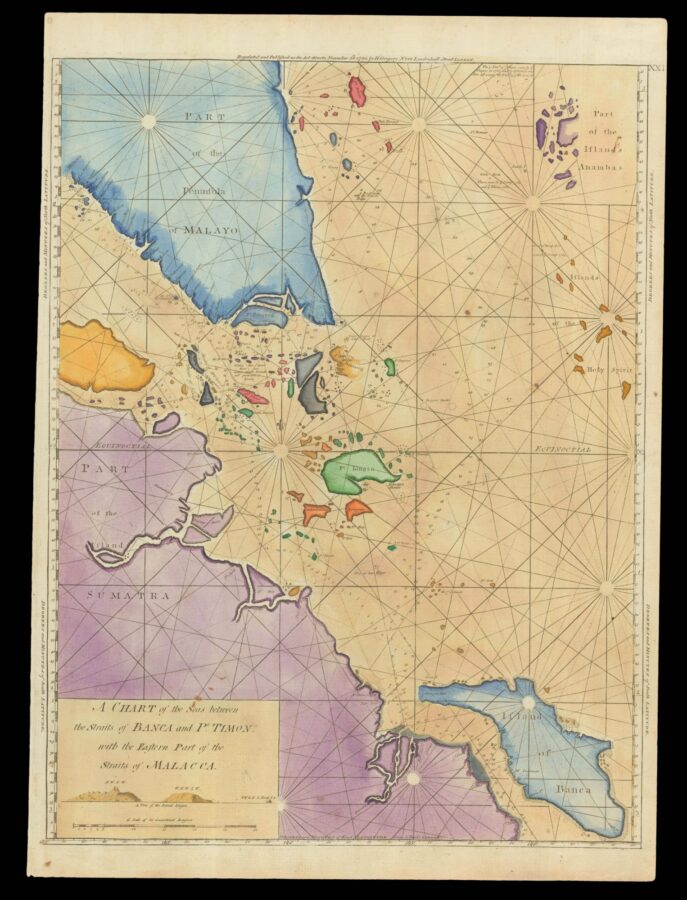 Unrecorded issue of this rare chart of the Singapore Strait

By HERBERT, William; and Henry GREGORY, 1780

When first published by William Herbert in 1767, this chart of the Malacca-Singapore Strait, was the first broadly accurate British sea chart of Asia’s busiest shipping lane, marking a milestone in the revival of hydrography sponsored by the East India Company, and a key chart used during the ascendancy of British economic and political power in Southeast Asia and the Far East.

The chart initially appeared within the third edition of Herbert’s ​‘The New Directory of the East Indies’ (1767), a rare atlas of Asian and African navigation that was sponsored by the EIC. The chart, while not predicated on systematic trigonometric surveys, and which features notable errors, was nevertheless a great improvement upon its predecessors, being sufficiently accurate and detailed to provide critical assistance to practical navigation. It embraces the southern part of the Malay Peninsula (labelled here as ​‘Part of the Peninsula of Malayo’), as far north as Malacca, in the west (which is marked in the far upper left); and the key anchorage site of ​‘Po. Timon’ (Tioman Island), off of the east coast. It then extends southward to embrace the southern part of the Malacca Strait and the all of the Straits of Singapore, through the Riau Archipelago, down so far as to include all of ​‘Banca’ (Bangka) and the east-central portion of Sumatra, including the city of ​‘Palimbam’ (Palembang).

Singapore Island, located near the centre of the chart, is labelled by its archaic name of ​‘Po. Panjang’. The ​‘Old Straits of Sincapore’ (the modern Johor Strait) are shown to run to the north of Singapore Island, while the ​‘New Straits of Sincapore’ (the modern Singapore Strait) are shown to run to the south of the island. Johor is marked as being at the mouth of the river ​‘R. Jahore’. The seas throughout feature innumerable bathymetric soundings and the labelling of major navigational hazards, as well as the marking of visual aids, such as headlands. Importantly, the safe shipping passage though the (modern) Singapore Strait is clearly marked, weaving past many small islands and reefs. While the practical utility of the chart is clear, it features honest acknowledgements of its own limitations in a region of complex hydrography, decades before it had been scientifically and systematically mapped. In the northern extremity of the Riau Archipelago is a note: ​‘Within this Space there are many small Islands not particularly known’.

Further to the east, the chart concedes that it possesses little accurate knowledge of ​‘Bintang’ island, preferring to show most of its shores as dotted lines. To the south of the Riau Archipelago, the mapping of the coasts of Banka and Sumatra is quite accurate. However, the offshore waters of the South China Sea, in the upper right of the chart, are not especially well understood, as the Anambas Islands are shown to be far too large, while, further to the south are labelled the apocryphal ​‘Islands of the Holy Spirit’.

Henry Gregory acquired Herbert’s stock and started reissuing his charts in 1777. The current chart appears to be an unrecorded second state, with the imprint of ​“H. Gregory”, but dated ​“November 30th 1780”, rather than December, and retaining the numeral ​“XXI”, upper right, which has been erased from the subsequent appearances in Gregory’s 1780 [1781] (fifth) and 1787 (sixth) editions of the ​‘New Directory’. The original plate was subsequently acquired by the London printer William Gilbert, who separately issued the chart in 1790, also cartographically unaltered, but bearing his imprint of ​“Wm. Gilbert” with the date of ​“Febr. 20, 1790”. 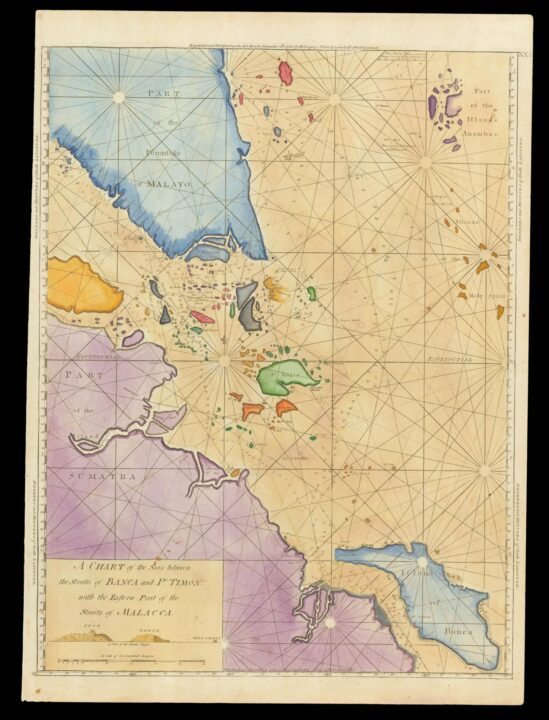 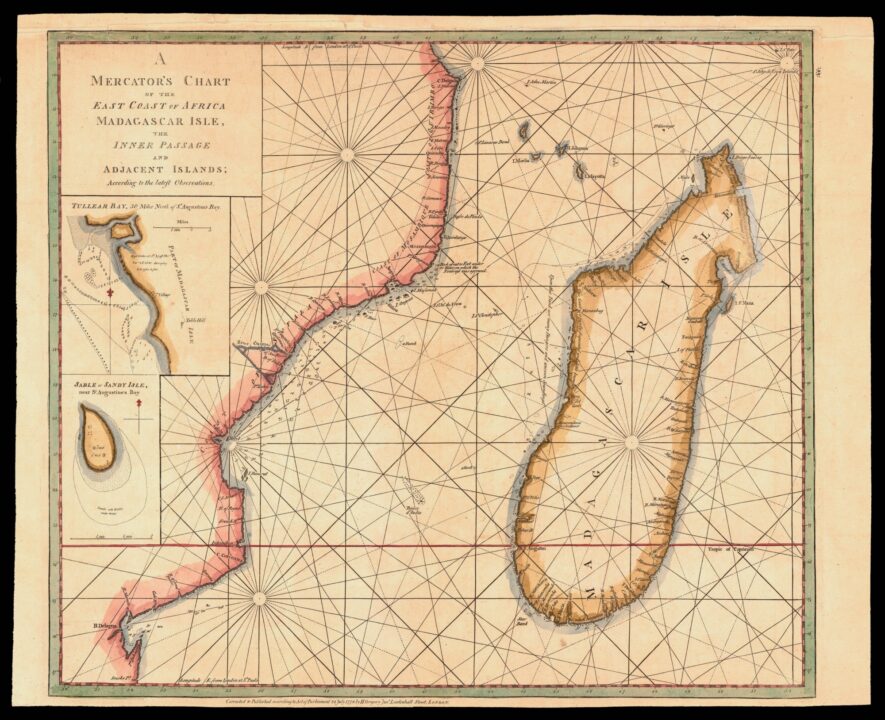 Rare chart of the East coast of Africa

William Herbert 1779.
A Mercator’s Chart of the East Coast of Africa Madagascar Isle, the Inner Passage and Adjacent Islands; According to the latest Observations.