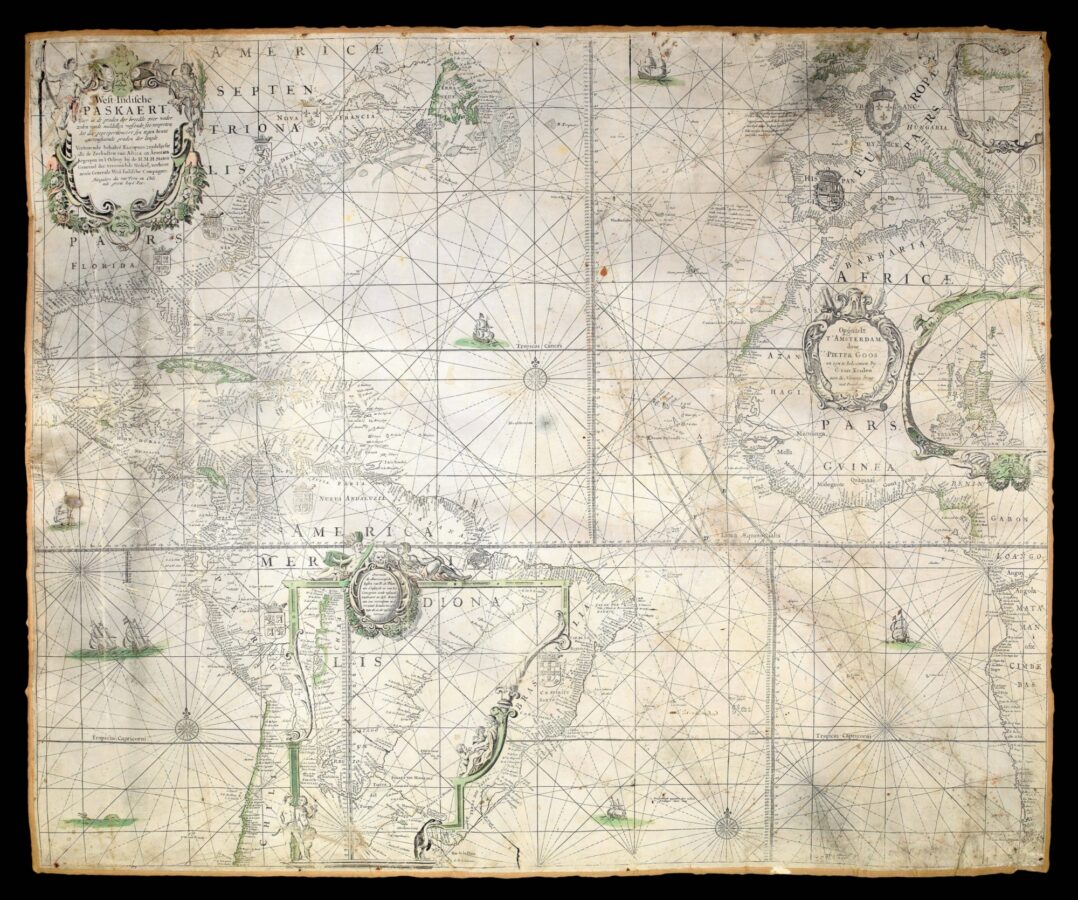 An unrecorded state of one of the most important charts published in the seventeenth century; and one of the earliest on Mercator’s projection to show North America.

This large chart, first published by Hendrik Doncker in 1659, is based on Blaeu’s seminal map of the Atlantic of 1630, the ​“earliest printed chart of the Atlantic … [which] became immediately the standard chart for navigation to America and the Cape of Good Hope”. So influential was Blaeu’s chart during the seventeenth century, that several derivatives are known, those recorded are by: J. A. Colom, circa 1639 and circa 1665; T. Jacobsz, circa 1646 and circa 1650; S. de Ruesta, 1654; H. Doncker, the present chart, 1659; Hugo Allard, circa 1660; Le Bocage Boisaye, 1669; and J. van Keulen, circa 1680. Despite the evident popularity of the chart during the seventeenth century, only a few examples of each of the recorded iterations survive, most likely due the fact that the majority were used aboard ship, and so suffered a high mortality rate.

The Doncker chart follows the outline of Blaeu’s, with several alterations. ​“Stadten Landt” near Terra del Fuego now bears a complete coastline following Hendrick Brouwer’s voyage of 1642–43; there are also two new insets; one to the upper right, showing the far east of the Mediterranean and the Levant, and the other, in Africa, featuring a chart of the British Isles. A second state of the chart is recorded (in the French Maritime Archives, and the National Maritime Museum) with the addition of the line ​“Saxsonburgh opgedaen door Willem Schellinger anno 1669”, to the lower right portion of the Atlantic. The chart was later acquired sometime between 1669 and 1675 by Pieter Goos, whose name appears on the present example. It is unclear why Doncker decided to sell the chart, but it is known that Doncker worked closely with both Goos’s son, Hendrick, and Caspar Lootsman, after Pieter Goos’ death in 1675. It is conceivable that Doncker might have co-published the chart with Pieter Goos at some point before 1675. The copper plates for the work would later be acquired, in 1693, by Johannes van Keulen, the leading chart maker of his day, along with the rest of Doncker’s stock. Van Keulen had also bought the plates to Blaeu’s ​‘West-Indische Paskaert’ at some point before 1680.

The present map bears the imprint of both Pieter Goos and Johannes’s son, Gerard van Keulen, who took over the business when his father retired in 1704, and shows several alterations from the 1669 second state. Doncker’s imprint has been erased from the title cartouche, and Van Keulen’s imprint added to the cartouche in Africa. There are
two engraved parallel lines crossing the Atlantic from northwest to southwest all the way from the Cape Verde Islands down to the equator, and marked ​‘A’ to ​‘E’. This is the ​‘karrespoor’ or ​‘wagenspoor’, literally the ​‘cart-track’, which marked the boundaries of the safest route through the Atlantic, a route that all Dutch East Indiamen were advised to follow, when sailing to the Cape of Good Hope and the East Indies. If the ship sailed east of the ​‘cart-track’ (line A‑C), then she risked becoming becalmed in the Gulf of Guinea, and if she ventured too far west, past line D‑E, she would enter the windless seas off the coast of Brazil. A smaller line marked ​‘F’ and ​‘G’, which protrudes from the line D‑E, marks the safe outward bound course (i.e. Europe to The Cape of Good Hope), with the ships following the coast of South America, before heading east across the Atlantic to The Cape of Good Hope.

Two legends appear in the sea off the west coast of France and Spain, respectively, providing information on hazardous reefs:

The reef marked with the letter ​‘A’ was discovered by a French privateer, this privateer having been captured by a Dutch warship, he is known to have stood with his feet on the aforementioned reef, and reported the fact.

​‘B’ is a rocky reef lying 15 English miles S.S.W. of Cape Vincent, was discovered by a certain English captain named van Bruyn. On this same reef a little ship, with only eleven foot of draft has been wrecked.
To the left of Madeira is marked a large bank, ​‘Steen gront’, with soundings, and just below the central compass rose is a series of dotted concentric circles marked ​‘D’ and named ​‘Maalstroom’. A maelstrom or whirlpool is a body of swirling water produced by the meeting of opposing currents.

Five manuscript courses are plotted, form Nantes to the Cape of Good Hope. It would appear, although it is hard to ascertain exactly, that four of the tracks show the outward and return voyages of, most probably, French merchant ships sailing to and from the East Indies. Nantes was the main French port for trade with the East Indies, and also the major port involved in the trans-Atlantic slave trade. It has been suggested that the tracks are of ships involved in the slave trade, as one track is shown to Rio de Janeiro, however, none of the tracks make landfall on any of the known slave trading areas situated on the west coast of Africa.

Rare. We are unable to trace another institutional example of this state. Two examples of earlier states are located by Schilder and Burden: The British Library (dated 1659) and the archive of the Depot de la Marine (circa 1669), we have also identified an additional example bearing the Schellinger 1669 date in the National Maritime Museum, all three are printed on vellum. Professor Günter Schilder states that a copy of this chart is recorded in the Middelburg Archives by C. de Waard, ​“Inventaris van kaarten in teekeningen, Middelburg 1916”, nr. 2084. Alas the Middelburg collections and archives were completely destroyed during the Second World War. Professor Schilder also mentioned having seen a copy of this state, but printed on paper in the 1970s at the National Archives, France.