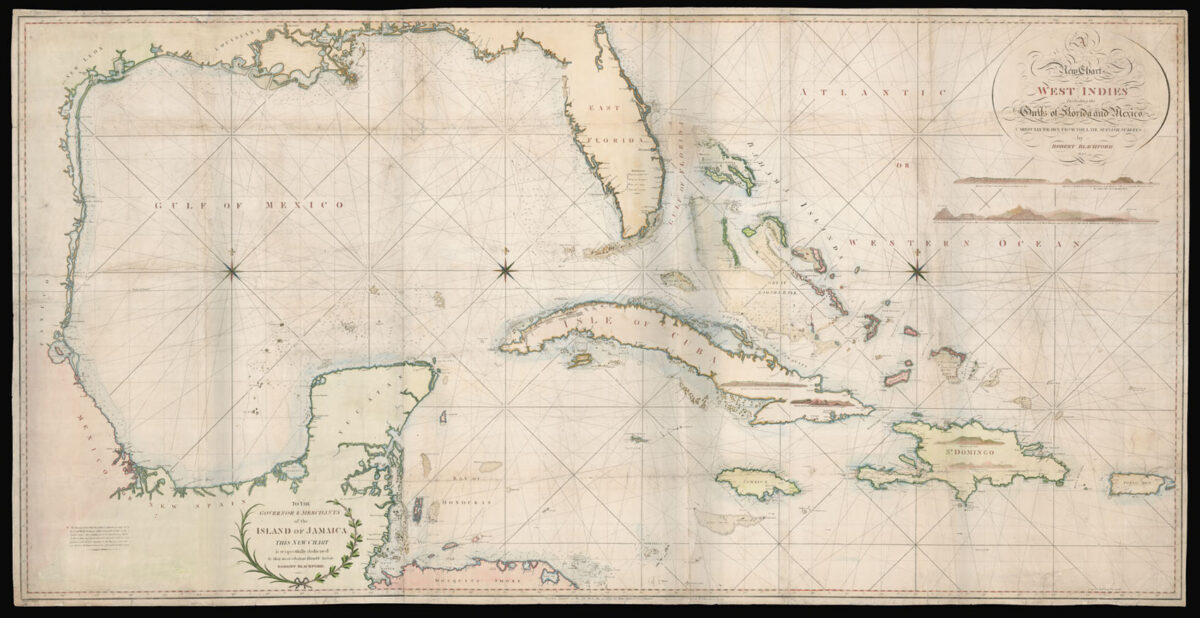 Unrecorded chart of Florida and the Gulf of Mexico

A New Chart of the West Indies Including the Gulfs of Florida and Mexico. Carefully Drawn from Late Spanish Surveys by Robert Blachford. To the Governor and Merchants of the Island of Jamaica. This New Chart is respectfully dedicated by thie most obedient Humble Servant Robert Blachford.

The chart is based on the landmark 1799 ​‘Carta Esferica que comprehende las costas del Seno Mexicano’, although on a slightly larger scale, and extending beyond Cuba in the east to include Porto Rico, and to the south to include the north coast of Honduras. The Spanish chart represented a huge advance in geographical knowledge, being the first scientific survey of the area. The original map was commissioned by the governor of Spanish Louisiana, Bernardo de Galvez who detailed one of his lieutenants, Jose Antonio de Evia to lead the exploration. The survey was carried out between 1783–86, and is best known for the charting of the coast of Texas, with Evia naming the newly discovered Galveston Bay, after his patron. In 1799, the map was published at the request of Don Juan Francisco de Langra y Huarte, the Spanish Secretary of State and of the navy. It remained the prototype for charts of the gulf for many decades.
To the lower left of the present chart, a legend states how highly the British valued the latest Spanish surveys: ​“The Drawing from which this chart is deduced was made for the late Lord Hugh Seymour whilst Commander in Chief on the Jamaica Station who so highly prized the Spanish Survey that he would not allow any captain under his command to hold two Copies judging it of the greatest importance amongst the Commanders on the Station”.
Lord Hugh Seymour (1759–1801) became Commander in Chief of the Jamaica Station in 1800. Unfortunately, his tenure was cut short when he contracted Yellow Fever, and passed away in September of 1801.
Robert Blachford (fl. 1801–1840) chart seller and publisher was, as he states on the present chart, ​“son-in-law and partner to the late J. Hamilton Moore”. Blachford continued Moore’s business with limited success, facing stiff competition from the likes of William Heather — another pupil of Moore’s — and James Horsbough, among others. He was declared bankrupt in 1819, engaged in a short-lived partnership with William Lane until 1821, and was joined by William Blachford in 1827 to create a moderately successful business. It was not until the business passed to Michael Blachford and his partner, James Imray, that trade improved.
Rare. We are unable to trace any institutional example of this chart.