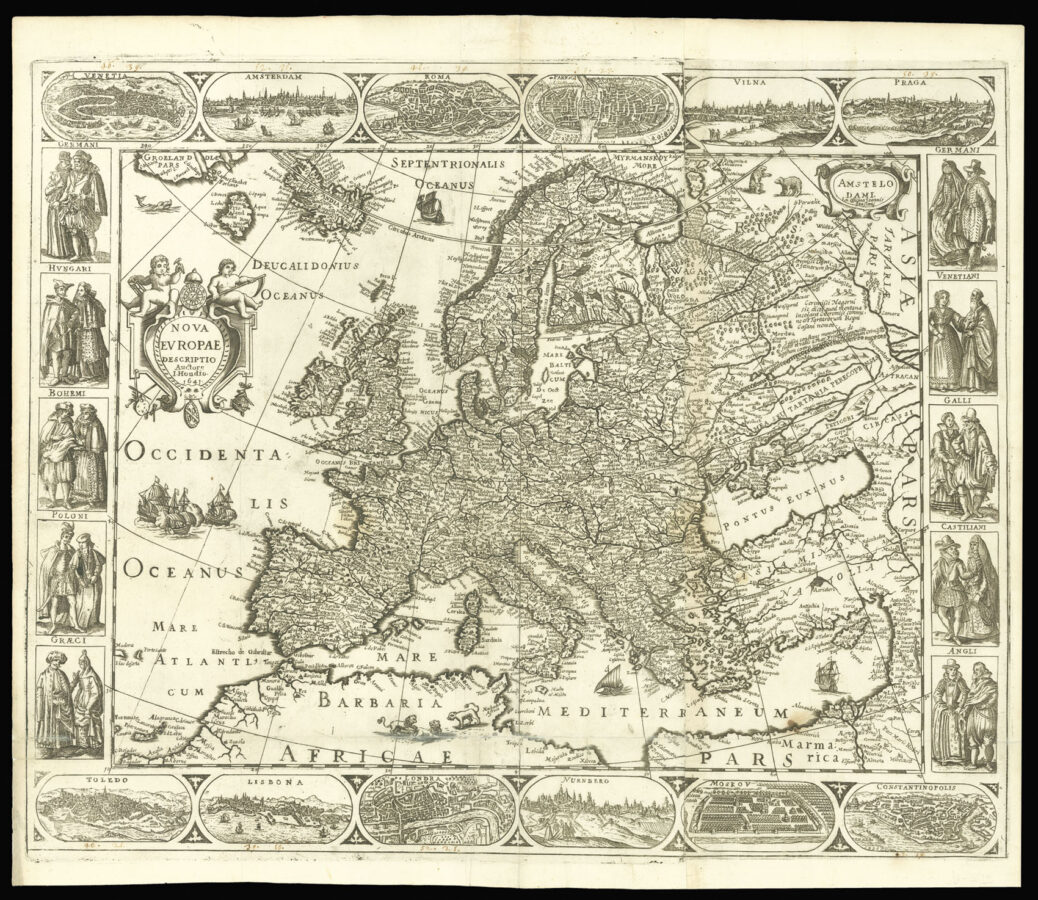 An unrecorded pirated Italian edition of Jodocus Hondius’ carte-a-figures map of Europe. Gunther Schilder, in the introduction to his cartobibliography of Dutch maps with decorative borders (sometimes termed carte-a-figures, or ​‘panelled’ maps), commented ​“this genre must be considered one of the finest products of the Amsterdam map-making industry. The successful combination of advances in geographical knowledge with the expression of artistic capability made these maps a valued commodity on both the domestic and broader international market”.

Although the present map bears no date, and is clearly a copy of the Dutch original, it is possible that it was engraved in Venice, perhaps by the little known publisher Stefano Scolari. There are several reasons to back up this case. First, the paper bears a watermark of an anchor in a circle, surmounted by a six-pointed star (possibly Heawood 8) which indicates the paper to be Italian and of the period; second, the map appeared together with six other similar examples at a Sotheby’s auction, several of which bore the date 1642, and had numerous vignette views to the borders reversed, so that the Tower of London appeared on the left rather than the right of the image, however, this error is not present on the views of Venice, Rome and Constantinople which appear on the map of Europe.

The map is based upon Hondius’s map of Europe published in 1623, together with the other three continents, which were most probably engraved by Pieter van den Keere. The title appears in the Atlantic Ocean in a cartouche flanked by two putti and crowned by a clock, in the centre of which is a skull surrounded by flames. The imprint appears in a cartouche to the upper right hand corner. The town views to the upper and lower border are based upon Hondius’ 1619 map of Europe, and the costumed figures in the side borders upon Blaeu’s 1617 map of Europe. The geographical content is based upon the previous wall maps, which were in turn a reduction of Blaeu’s wall map of Europe.

Not recorded in Schilder’s ​‘Monumenta Cartographica’ vol. VI. The imprint is the same as 28.2, however, with the addition of the date 1641; the arrangement of the figures differ (with the ​“Belgi” figures named ​“Germani”); as do the views: both London and Paris, are labelled in Italian ​“Londra”, and ​“Pariggi”.