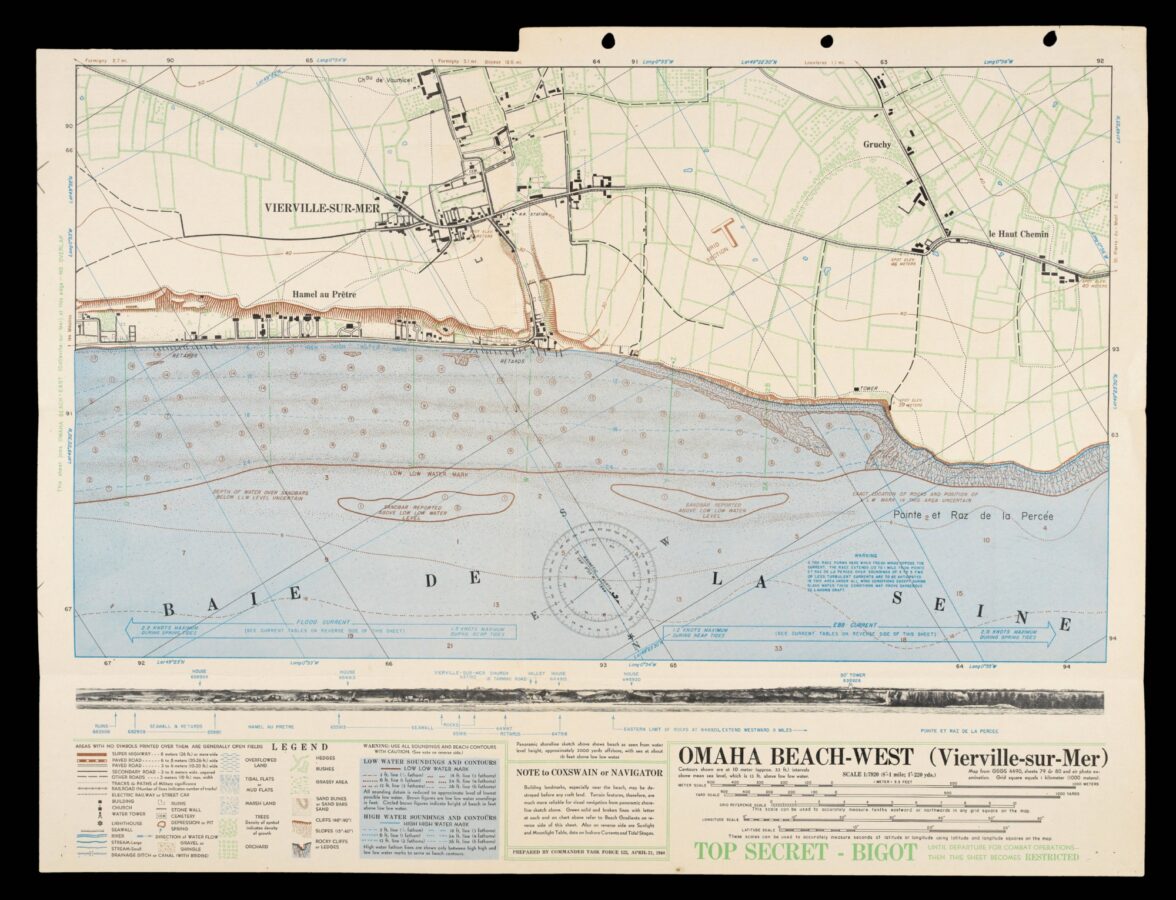 The maps and composite photographic ​“panoramic shoreline sketch[es]” were produced as part of the strategic planning for Operation Overlord, and the D‑Day landings of June 6th 1944. They portray the coastline of a section of the Baie de la Seine, from just east of Vierville-sur-Mer to west of St. Laurent-sur-Mer code-named ​‘Omaha Beach’, in very great detail. Particular attention is paid to the height and steepness of the terrain just inland of the beach, to high and ​‘low low’ water marks, variance in water depths, and currents; all supported by tables and graphs on the verso.

Omaha Beach was the largest of the landings of the Normandy Invasion, extending over about six miles of coastline. The whole beach was overlooked by steep cliffs, and a large proportion protected by a sea wall ten feet high, all of which were reinforced by German fortifications. As a result the landing at Omaha suffered a great number of casualties.

Commander Task Force 122, or United States Twelfth Fleet, WWII, Commanded by Rear Admiral Alan G. Kirk, who commanded D‑Day’s Western Naval Task Force and the Utah and Omaha Beach landings, prepared the maps on April 21, 1944, from various cartographical sources and aerial photographs. Though the maps include up-to-the-minute information, for active use, they come with various caveats too: ​“NOTE to COXWAIN of NAVIGATOR: Building landmarks, especially near the beach, may be destroyed before any craft land. Terrain features, therefore, are much more reliable for visual navigation from panoramic shoreline sketch above”.

Each map is labeled in bold green ink ​“TOP SECRET – BIGOT until departure for combat operations—then this sheet becomes RESTRICTED”, identifying them as being only for the eyes of those with top security clearance. ​‘Bigot’ was used to designate the highest level of military secrecy, and consequently, those personnel cleared to know details of Operation Overlord, known as the ​‘Bigot list’, and the people on it, as ​‘Bigots’.

Operation ​‘Overlord’, was part of a large strategic plan designed to bring about the defeat of Germany by heavy assaults on German-occupied Europe from the United Kingdom, the Mediterranean and Russia. The outline of the Operation ​‘Overlord’ plan was completed in July of 1943, and the particular assault on the Normandy beaches from the UK and the English Channel elaborated under the title of Operation ​‘Neptune’ in February of 1944. ​‘Neptune’ involved preparatory aerial and naval bombing of German coastal positions, before the historic landings of D‑Day itself: the largest amphibious operation in history, and a pivotal moment in the course of WWII which eventually resulted in the liberation of western Europe from German occupation.
Rare: examples at the Perry-Casteneda Map Library, University of Texas 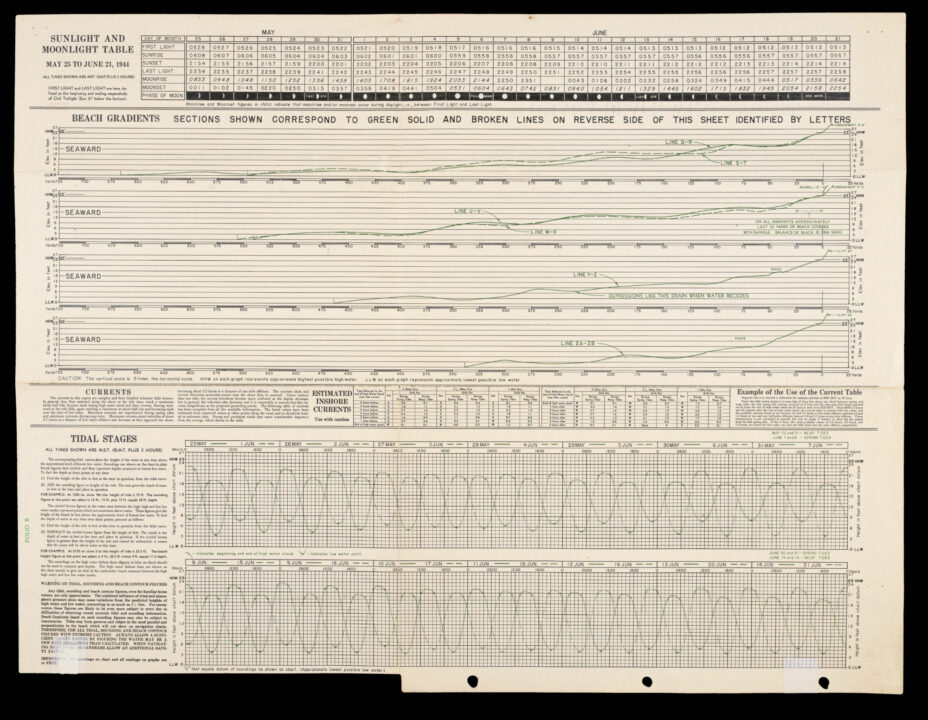 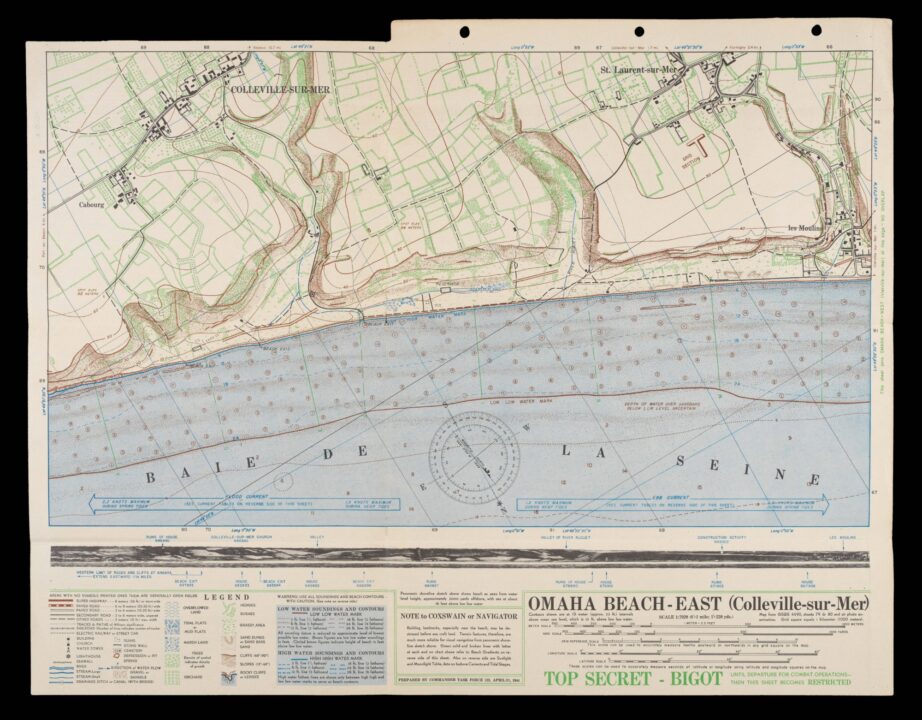 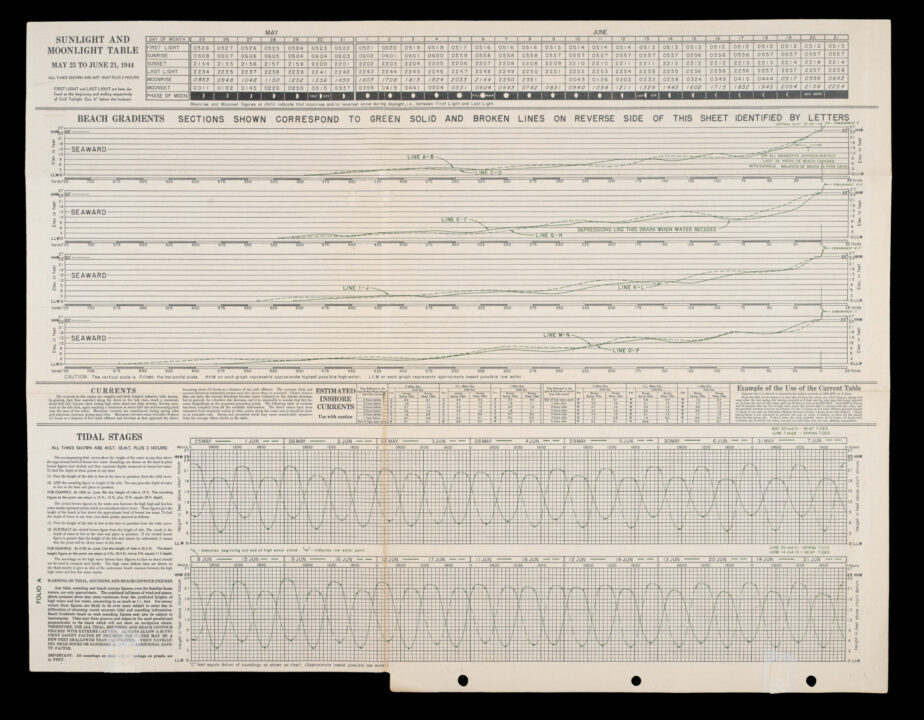