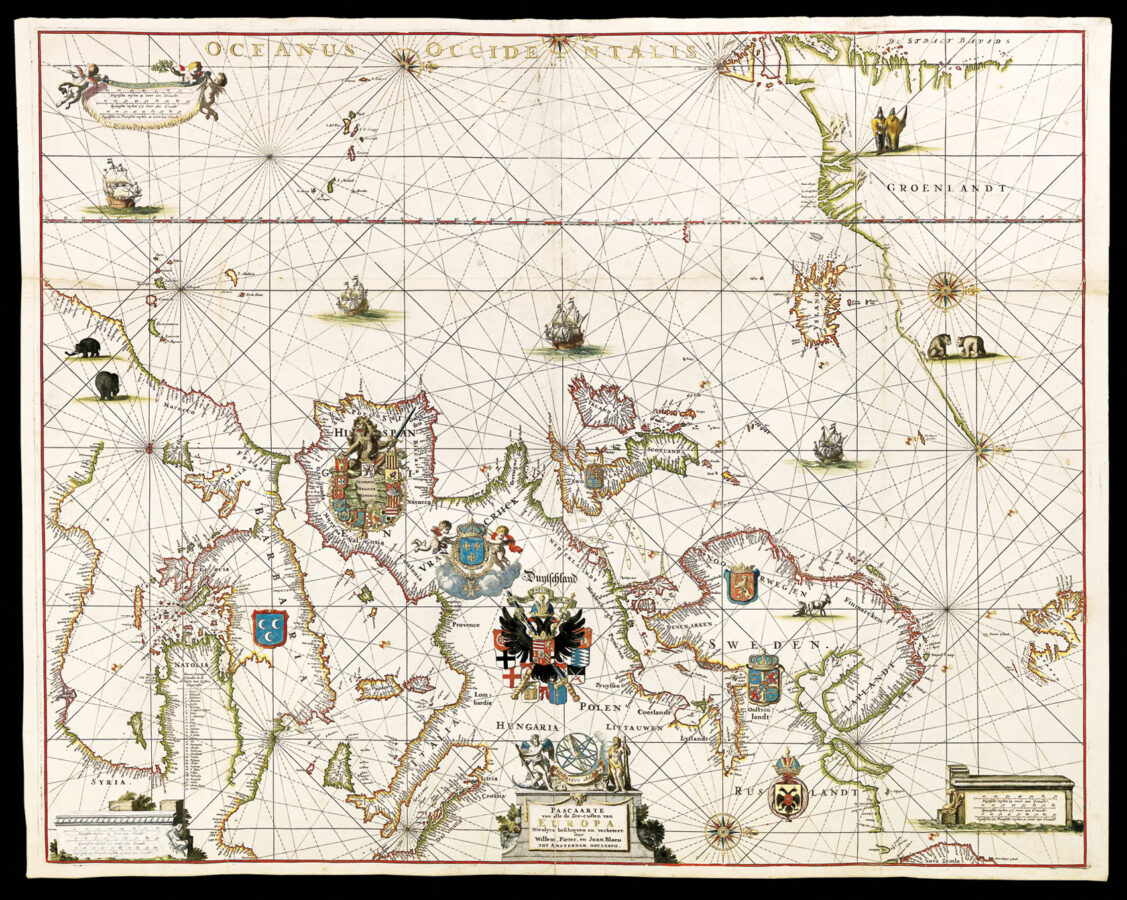 A spectacular set of three Dutch sea charts, or ​“Pascaartes”, comprising: Blaeu’s chart of the Atlantic — one of the most important charts published in the seventeenth century, one of the earliest on Mercator’s projection, and the first on the projection for North America; Pieter and Johannes Blaeu’s chart of Europe — one of the last maps to bear the Blaeu family imprint and a tour-de-force of the mapmaker’s art; and Doncker’s chart of Asia with beautiful vignettes by Johannes Leupenius — one of the few charts of the Asian seas printed in seventeenth-century Amsterdam, and one of the earliest to show the Dutch discoveries on the west coast of Australia.

One of the greatest treasures from the Golden Age of Dutch cartography is the 19-volume ​‘Atlas van Hadrianus Relandus’ at the Meermanno-Westreenianum Museum in The Hague. Not only does it include many legendary maps and sea charts of the seventeenth century, but, according to Herman de la Fontaine Vervey, ​“the majestic whole has been coloured leaf by leaf by van Santen with the utmost care, using transparent colours, and with even the tiniest details heightened with gold.” He was referring to Dirk Jansz van Santen, the ​“Meester Afsetter” (master colourist), whose ​“name was renowned throughout his lifetime and long thereafter, and for whose work there was great demand.” Dirk Jansz. van Santen ​“illuminated and gilded the most prestigious printed works of his time in an exceptionally painterly and brilliant manner. In so doing, he made the Golden Age, quite literally, golden” (Goedings). His clients were the foremost collectors of his age, who often described his art in similarly eulogistic terms.

Rarely do maps coloured in van Santen’s hand come up for sale; rarer still are maps offered that can be ascribed to him with certainty, as he did not sign the works that he illuminated. The present examples can confidently be attributed to the master, as the chart of Southeast Asia by Hendrick Doncker is coloured in a manner identical to that used for the same chart in the Hadrianus Relandus atlas. The other two charts are coloured in the same way, and, therefore, form part of a set. A note in the Relandus atlas reads ​“artifex eximinus Theodorus van Santen,” and when the atlas came up for sale in 1707, the catalog stated that it was ​“magnificently coloured by Dirk Jansz van Santen, the equal of Blok”. This comparison to Joanna Blok-Koerten was a strong accolade, as she was the seventeenth century Dutch artist most celebrated for fine colouring. Examples from the Relandus atlas of two of the three maps here offered are illustrated in Robert Putnam’s ​‘Early Sea Charts’. Both have pale blue oceans, rich colouring in the decorative vignettes, and the lavish use of gold. The colouring is so alike on the two charts that at first we were concerned that they might be the same work, but close inspection revealed such minor differences as the outline color of Japan – on ours it is green; on the Relandus copy it is red — that make it clear that they are in fact different charts coloured by the same hand. Truusje Goedings, author of ​‘Dirk Jansz. Van Santen… a Survey’, and acknowledged authority on the works of the master colourist, has examined the present charts and compared them carefully with the maps in the Relandus atlas, and has made the following statement: : ​“I have examined the three charts at Daniel Crouch Rare Books, and the equivalent charts in the ​‘Atlas van Hadrianus Relandus’ at the Meermanno-Westreenianum Museum in The Hague, and I can confidently conclude that these charts were coloured by the same hand”. A copy of her full report on the charts is available on request.

The chart of the Atlantic

The very rare second state (of four) of one of the most important charts published in the seventeenth century; one of the earliest on Mercator’s projection, and the first on the projection for North America.

Waters: the ​“earliest printed chart of the Atlantic … became immediately the standard chart for navigation to America and the Cape of Good Hope”.

Campbell says that only ​“a few examples at most” of each state have survived. The title indicates that the Paskaert was designed to show the area chartered to the West India Company in 1621. Destombes and Gernez suggest that the lack of a privilege on the first state indicates that it was used exclusively by the company and not available to the general public.

Schilder locates just two examples of the first state, which has the imprint of Willem Blaeu and the dedicatory cartouche left blank (Koninlijke Bibliotheek, Brussels; Badische Landesbibliothek, Karlsruhe). Burden also locates just two for this second state, with Robijn’s imprint added to the dedicatory cartouche (British Library, London; Bibliotheque National, Paris). Robijn must have acquired the plate ​“at one of the sales of Blaeu’s stock in 1674 … He must have disposed of the plate fairly quickly as the next state is by Pieter Goos who died in Match 1675”. This brief period of ownership would explain the great rarity of this second state.

The examples located by Schilder and Burden are printed on vellum. No census of examples on paper has been compiled. The paper examples are also quite rare, and those that survive were included in luxurious composite atlases. An example of the Robijn state on paper in a private Dutch collection is reproduced in Putnam, ​‘Early Sea Charts’ (plate 27).

Destombes and Gomez praised the West Indische Paskaert as ​“an extremely interesting chart because it is one of the earliest engraved and printed to include latitude… this scientific and artistic document of the first order marks an important date in the history of nautical cartography and is one of the most important contributions that the Lowlands produced in the XVII century”.

The ​‘West Indische Paskaerte”s importance extends far beyond its early use of Mercator’s Projection. It appears to be the work of Hessel Gerritsz, ​“the chief Dutch cartographer of the XVIIth century” (Keuning, ​‘Hessel Gerritsz’). Gerritsz was the official cartographer to both the Dutch East and Dutch West India Companies, and before his death in 1632, he constructed a number of well-known maps and charts for Willem Blaeu; the most important must have been this chart for Atlantic navigation. Based upon the date on the title-page of the now-lost accompanying sailing directions, Günter Schilder and others believe the Paskaert was published in 1630, which was a pivotal year in Dutch cartographic history.

The Paskaert is contemporary with Johannes De Laet’s ​‘Nieuwe Wereldt’ (eds. of 1625 and 1630), which contained a suite of 14 regional maps of America by Gerritsz. These maps introduced what Zandvliet calls a ​“new map image” for America, which was soon duplicated in the regional maps that Gerritz prepared for the great atlases of Blaeu and Jansson. Campbell points out that the Paskaert ​“betrays knowledge” of the maps added to De Laet. The West Indische Paskaert combines Gerrittsz’s ​“new map image” of the regional maps into one great general chart.

The chart of Europe

An exceptional rarity, and a splendid work of art, the Pascaarte of Europe was the work of the grandsons of Willem Jansz. Blaeu, Pieter and Johannes, and one of the last maps to bear the Blaeu imprint as the chart dates from the period following the fire at the Blaeu family’s Gravenstraat premises in Amsterdam in February 1672. A year later Johannes Blaeu I died, and the remaining plate stock was auctioned in 1674 and 1677. The present chart of Europe therefore is one of the few productions from the post-fire period.

The chart is an improved re-engraving of the elder Blaeu’s 1621 (or later) chart with the same title. No census of the 1677 chart has ever been attempted, but Schilder locates only two examples of the c1621 pascaarte printed on paper, compared to six on vellum.

This is the last in a series of large-scale pascaartes of Europe published from c.1606 by the firm of Blaeu. The charts of 1621 and 1677 extend much further west than the earlier examples, so that they include southern Greenland and the Azores. They also add small compass roses that Cannenberg says ​“show the magnetic variation on the spot.” The 1677 chart improves on the 1621 by extending the coast of Greenland, and correcting the coasts of Iceland, Ireland and other parts of Europe.

The chart of Asia

Doncker’s ​‘Pascaerte van Oost Indien’ is not only extremely decorative, it is also important historically; it is one ​“of the few charts of the Asian seas printed in seventeenth-century Amsterdam” (Putnam). This is a rare first edition of a chart that was later published by Pieter Goos and Gerard van Keulen. It is also one of the earliest to show the Dutch discoveries on the west coast of Australia. Although there is no date of publication in the cartouche, the chart was cited in an advertisement in Doncker’s 1664 pilot guide of the Mediterranean. In addition to its appearance in Putnam’s book, the Pascaerte van Oost Indien serves as the frontispiece to Suarez’s ​‘Early Mapping of Southeast Asia’. 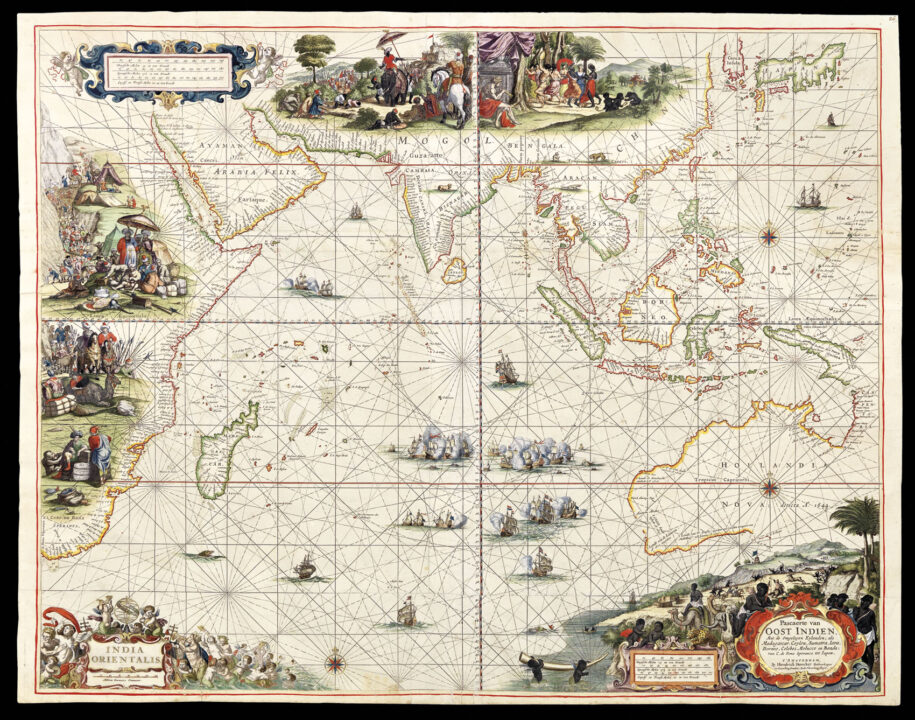 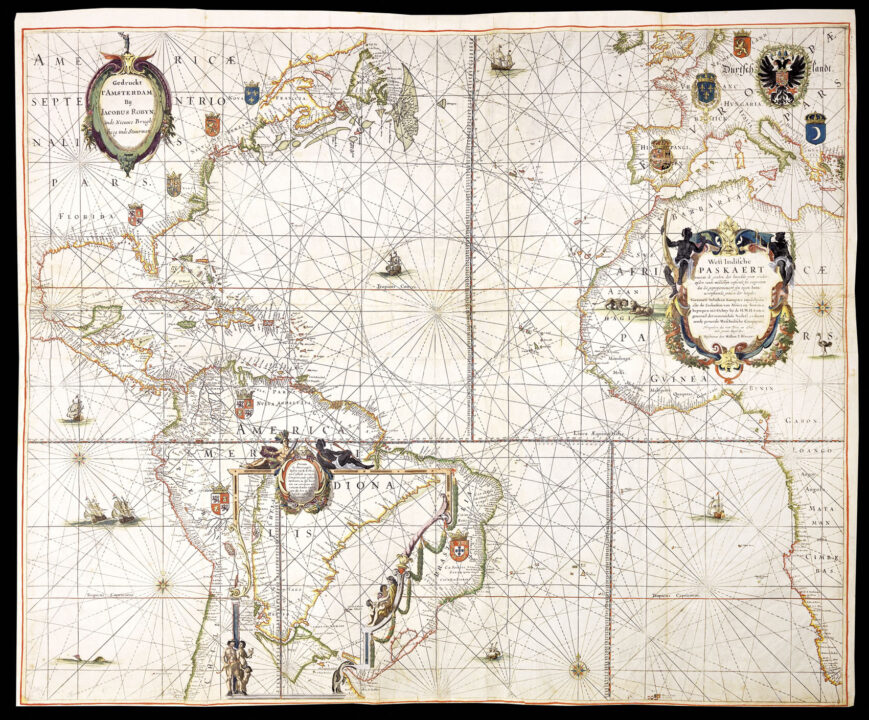