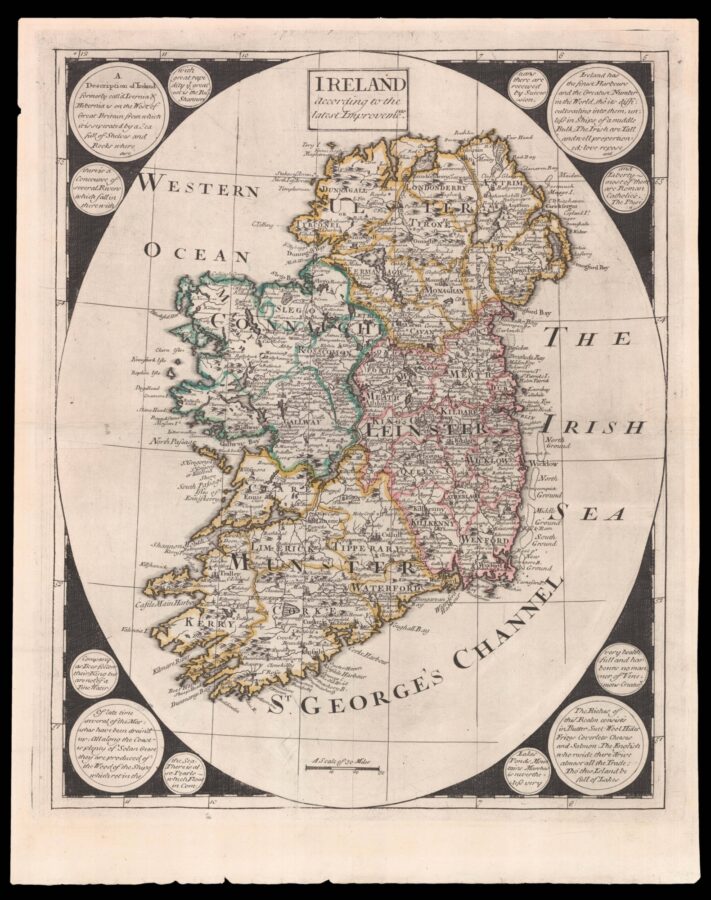 There are two known composite atlases, compiled around 1721 and 1790, which contain the map of Ireland.

Ireland according to the latest Improvements

A rare map of Ireland with a unique design.

George Willdey (?1671–1737) was a flamboyant London shopkeeper and self-publicist. His principal business was as a toy-man and seller of luxury goods, jewellery, gold and silver trinkets, and china. However, he was perhaps the first mapseller to widen the appeal of maps from an intellectual elite to the general public; the interesting shape and ​‘fun facts’ on the present example show his attempts to broaden their appeal.

Willdey’s map of Ireland was part of a series of separately issued maps showing countries across Europe, as well as London, Oxford and Cambridge. This series is most commonly attributed to Samuel Parker, on the grounds that the map of England and Wales bears his signature, and several other maps show his distinctive style. All of these maps are formatted in the same unique way, with the central image contained in an oval set against a dark background, and all four corners containing three roundels of text. The black borders are most rare because of the amount of work required to create large black areas by engraving lines.

The map of Ireland distinguishes the northern, eastern, southern and western regions of Ulster, Leinster, Munster and Connaught with distinct colour outlines. Settlements, rivers, castles, loughs and islands are all shown and identified by name, with relief illustrated pictorially. The harbours, ports and bays around the coastline receive particular attention, and on the east side of the mainland, some marine obstacles are indicated. The text in the 12 roundels provides a variety of geographical, historical, economic and cultural information about Ireland. Some of these facts are dubious, such as ​“Ireland has the finest Harbours and the Greatest Number in the World”, while others show a clear English bias, for instance: ​“The Riches in the Realm consist of Butter, Suet, Wool, Hides, Frizes, Coverlets, Chearer and Salmon. The English who reside there drive almost all the Trade”.

This map is extremely rare. There are two known composite atlases, compiled around 1721 and 1790, which contain Willdey’s map of Ireland, but we have otherwise been unable to trace any further examples.