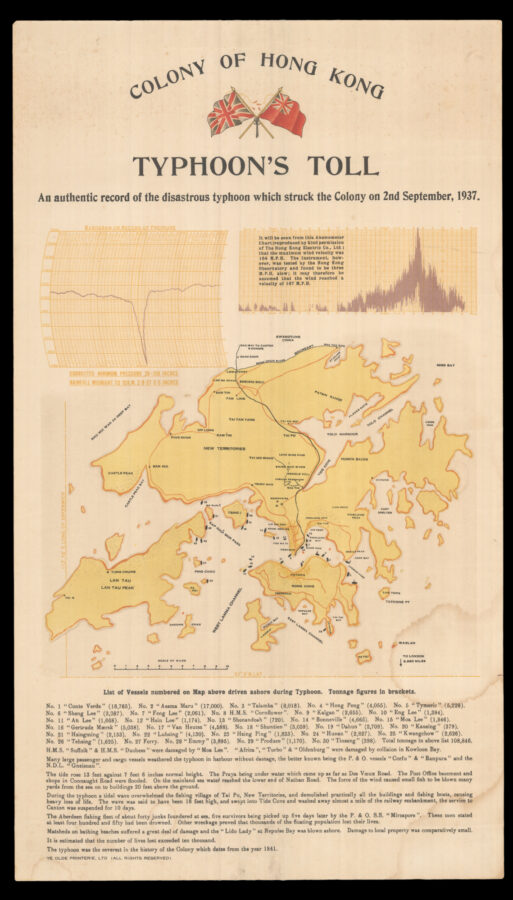 “An authentic record of the disastrous typhoon which struck the Colony on 2nd September, 1937”.

One of the deadliest natural disasters in Hong Kong’s history, the 1937 typhoon killed 11,000 people when it hit the island on September 2nd, eliminating almost 1% of the population. At this time, Hong Kong’s Victoria Harbour was the seventh busiest port in the world, and was filled with all manner of vessels and people when the typhoon hit. As well as the harbour, many smaller villages also saw unprecedented damage and casualties when the winds produced a 30ft tidal wave.

The typhoon had developed east of the island, in the western Pacific Ocean, during the final days of August, and approached the island at a rate of 32 km/​h (20 mph). As it passed to the south of the island it produced winds so strong that some observatory instruments broke down. They were ultimately calculated, however, to have reached around 167 mph, as recorded on the present poster.

Printed soon after the event by Ye Olde Printerie, and perhaps published in the South Sea Morning Post, an English-language newspaper in circulation in Hong Kong since the early twentieth century, the poster documents the impact of the typhoon. It presents a barogram chart recordin the atmospheric pressure during the event, and notes the rainfall during the night of the typhoon. To the right of these is the Anemometer Chart, provided by the Hong Kong Electric Company, which presents the wind velocity.

At the centre of the poster is a map of Hong Kong with many cities, towns, rivers, reservoirs, harbours and other waterways identified by name, as well as the ​“railway to Canton & Europe” outlined in black. A corresponding key below identifies the ​“vessells…driven ashore during Typhoon”, complete with their weight. Further written information beneath the key provides details about the vessels, villages and roads damaged or destroyed during the natural disaster, and remarks that ​“the typoon was the severest in the history of the Colony which dates from the year 1841”.

Ye Olde Printerie is a company established in Hong Kong in 1923 by the Labrum brothers from Warminster, England, presumably for the benefit of their fellow British workers and expatriates. The firm produced English language posters, books and stationery, and continues to operate today.