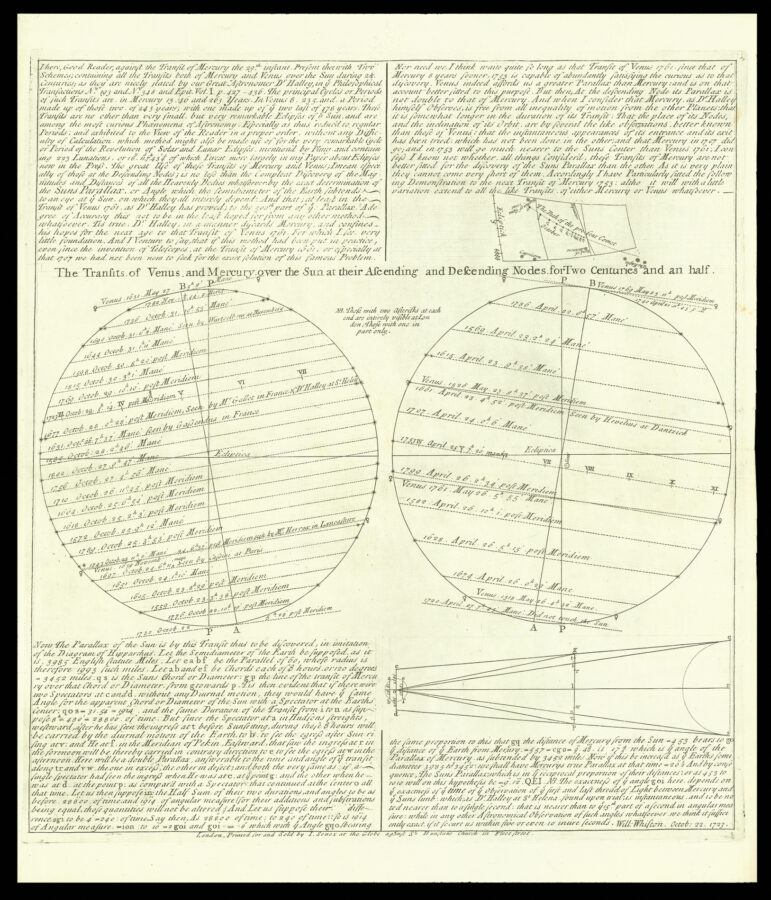 The transits of Venus and Mercury

The Transits of Venus and Mercury over the Sun at their Ascending and Descending Nodes, for Two Centuries and a half. [engraved text signed and dated:] … Will: Whiston. Octob: 22. 1723. London Printed for and Sold by J. Senex at the Globe against S.t Dunstans Church in Fleet street.

Two diagrams, with descriptive text, showing the transits, first of Mercury and, second, of Venus, across the face of the Sun, as seen from Earth. The passages of Mercury range in date from 1559 to 1815, notably the eclipse that occurred on 28th October 1677 (Old Style Calendar; 7th November New Style), which was studied by Sir Edmund Halley from St. Helena, where he spent a year surveying the southern stars. Apart from observing the eclipse, Halley produced the first star catalogue laid down with a telescope and, from his observations, drew the first accurate chart of the southern celestial hemisphere. The observations for the transits of Venus date from 1569 to 1779.

Halley published an important essay on the significance of the transit of Venus, using triangulation as a means of calculating the solar parallax — determining the mean distance of the Sun from Earth. While Halley was focussed on Venus, some of his successors, including Whiston, felt that the transit of Mercury was of no less importance, writing ​“The great Use of these Transits of Mercury and Venus … is no less that the Compleat Discovery of the Magnitudes and Distances of all the Heavenly Bodies, whatsoever, by the exact determination of the Suns Parallax, or Angle which the semidiameter of the Earth subtends to an eye at ye Sun, on which they all intirely depend”.

Describing this engraving, Woolf wrote:
​“Primarily produced for this 1723 transit of Mercury, and issued only a week or two before the event itself, it has a Janus-like importance. On the one hand, looking backward, it suggested that the exclusive Halleyan concern with Venus unnecessarily limited the usefulness of its transits. … On the other hand, looking forward, the Whiston broadside is the first of a long series of printed notices, broadsides, and pamphlets designed to awaken public interest in the importance of these transits.”

The sheet was also intended as a tool for Whiston’s lecture series; its publication was announced in the Daily Post (issue 1271) for 24th October, 1723, thus
​“Mr. WHISTON gives Notice that Mr. Senex this Day publishes His Scheme of the Transits of Mercury and Venus over the Sun, with the Path of the present Comet; Price 1s. That He and Mr Hauksbee intend to begin their Astronomical Course on Tuesday next, the Transit of Mercury precisely at Half an Hour after Two in the Afternoon, with a Lecture on such Transits, and on Comets, at the farthest House but two of Southampton-Row, Bloomsbury: And that he still attends every clear Night to shew all that go his small Course, the Comet, before it disappears.“

This first state has a small diagram showing ​“The Path of the present Comet”; in the second state, this was replaced with a table, ​‘The XXIV Eclipses of the great Year 1736 …’, which this reprint is intended to illustrate.