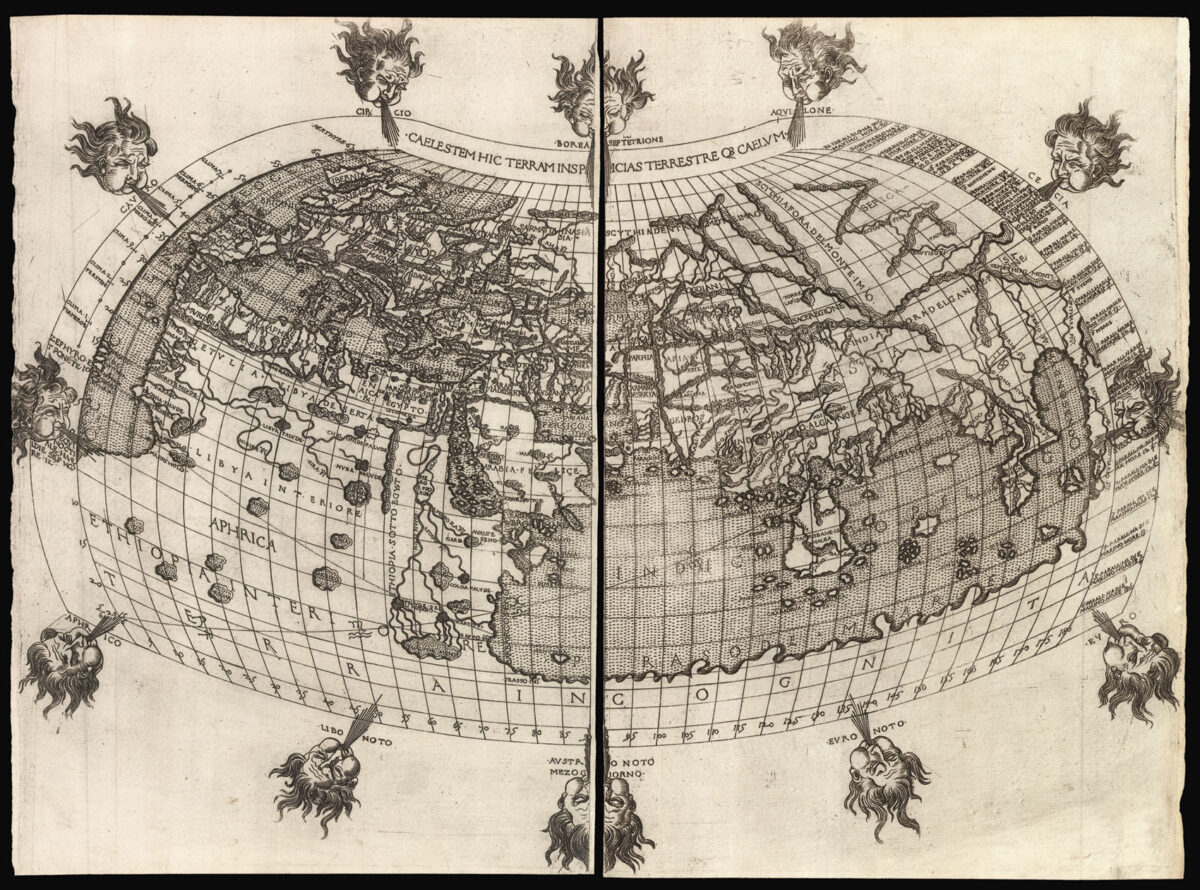 The third printed map of the World

The map appeared in Francesco Berlinghieri’s edition of Ptolemy’s Geographia, published in Florence in 1482: the third printed atlas.

​“Although the world map which adorned the first pages of the section of maps in Berlinghieri’s ​‘Geographia’ remained tied to the Ptolemaic conception of the ​‘oikoumene’ [i.e. the world known to the Ancient Greeks], its utilisation of the new techniques of print culture produced an image of remarkable visual clarity and geographical precision, which surpassed previous attempts to re-create the Ptolemaic ​‘oikoumene’ ” (Brotton).

The map was printed on two copper sheets, the present example is not joined and still, remarkably, bears a margin to the left-hand sheet, which was used to join the two sheets together. It is surrounded by 12 finely engraved windheads denoting the direction of the 12 classical winds. For the maps’ projection Berlinghieri employed, for the first time in an edition of the Geographia, Ptolemy’s original projection of equidistant parallels and meridians, giving the map a much fuller and pleasing appearance.

The engraving of the map has been attributed by Boorsch to the Florentine engraver and map seller Francesco Rosselli, via the study of the engraved letters, which, much like handwriting, is an indicator of individuality in cartographic style. Rosselli (1445–1513) was one of the leading engravers and painters of miniatures of his day. His engraving style was heavily influence by the great Renaissance artist Sandro Botticelli. The windheads on the present map are redolent of Zephyr depicted on Botticelli’s ​‘The Birth of Venus’.

Francesco Berlinghieri was a Florentine humanist, pupil of Argyropoulos and Landino, and a member of the Academia Platonica of Marsilio Ficino, who added a short paragraph in Latin to his ​‘Geographia’, addressed to Fedrigo de Montefeltro (1422–1482), to whom Berlinghieri dedicated the work (f. *2 verso). Berlinghieri had originally intended to dedicate it to the Turkish Sultan Mehmet II (see Firenze e la scoperta dell’ America, Florence, 1992, no. 112).