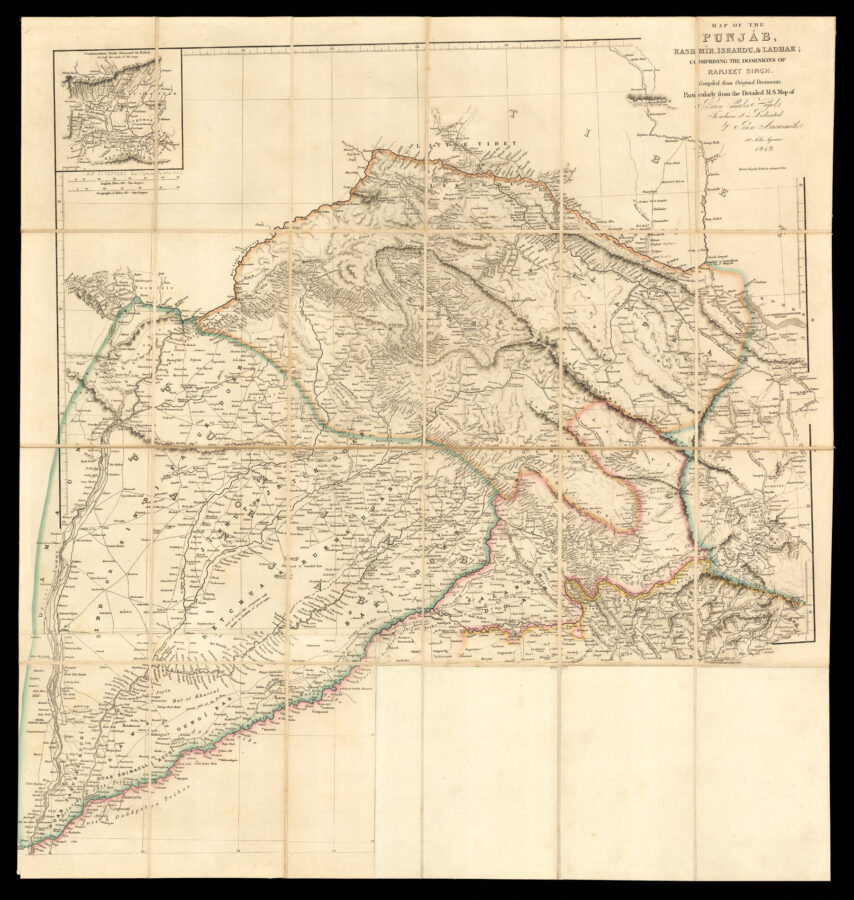 The territory of the holder of the Koh-i-Noor diamond

Map of the Punjab, Kashmir, Iskardu, & Ladhak; comprising the dominions of Ranjeet Singh. Compiled from Original Documents, Particularly from the Detailed M.S. Map of Baron Charles Hügel. To whom it is Dedicated by John Arrowsmith.

A map of the Sikh Empire.

Maharaja Ranjit Singh (1780–1839) was the founder and first ruler of the Sikh Empire. A brilliant warrior, he began as a misldar (baron) in the Punjab, and had taken control of the entire region by 1800. By the time he died, the Sikh Empire covered Punjab, Kashmir, and parts of modern day Afghanistan, Tibet and China. He is most famous for the secular tolerance of his empire, despite his nickname of ​‘the Lion of Punjab’, and for his ownership of the Koh-i-Noor diamond. The Koh-i-Noor was given to him under duress by Shuja Shah Durrani, the deposed Emir of Afghanistan. Ranjit Singh left the diamond to a temple in his will on his death in 1839, but his wishes were ignored by British administrators. A decade later, the Punjab, and thus the diamond, came under the control of the East India Company and the stone was given to Queen Victoria.

When this map was printed the Sikh Empire was on the brink of dissolution. After Ranjit Singh’s death, a series of short-lived rulers took the throne, often dying under suspicious circumstances. The East India Company took advantage of this internal weakness to launch the Anglo-Sikh Wars, which culminated in the separation of the empire back into princely states under the supervision of a British Lieutenant Governor in Lahore in 1849. The region was, therefore, of renewed interest to British observers, possibly explaining why Arrowsmith chose to issue the map.

The inscription notes that it is primarily based on the manuscript map of Baron Charles von Hügel (1795–1870). Von Hügel was a Austrian statesman and scientist, who undertook a five year tour of Asia in 1831 to distract himself after his fiancee jilted him. He wrote a four volume work, ​‘Kashmir and the Realm of the Sikh’, in which he described the region and his meetings with Ranjit Singh, and provided a map of his travels. It was immensely popular, and he was awarded the Patron’s Medal by the Royal Geographical Society for his work.