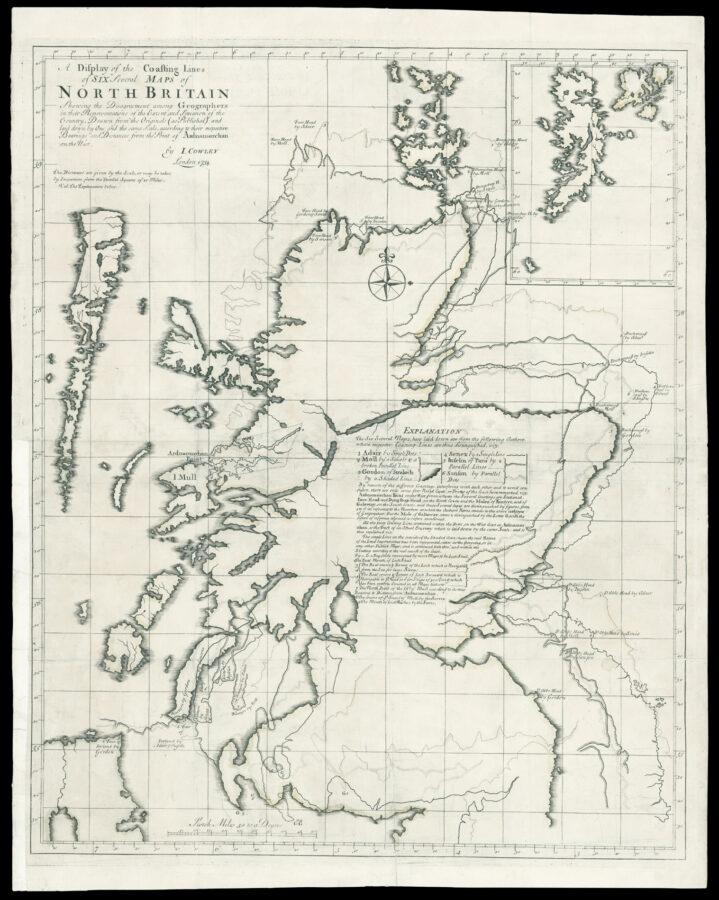 The surveying of Scotland

A display of the Coasting Lines of Six Several Maps of North Britain Shewing the Disagreement among Geographers in their Representation of the Extent and Situation of the Country. Drawn from the Originals (as Published) and laid down by One and the same Scale, according to their respective Bearings and Distances from the Point of Ardnamorchan on the West. [Together with] A New Map of North Britain, with the Islands thereunto belonging, done from some late Surveys of part of the East and West Coasts, and from Modern Accounts of the Country and other Authorities mentioned in the Explantion annexed Fol: (9). By J. Cowley, 1734.

Fascinating map illustrating the variation in the surveying of Scotland, together with Cowley’s new map of Scotland.

John Cowley, was factor to the Duke of Argyll on the Ardnamurchan estates in the west Highlands in the 1730s and 1740s. In 1734, Cowley produced several maps of the west Highlands as well as this remarkable map. The map shows the extent of Scotland according to different geographers and mapmakers, with John Adair’s map used as the base. The other map outlines are from Herman Moll (A Set of ThirtySix New and Correct Maps of Scotland, 1725); Robert Gordon of Straloch, whose work Sibbald had used and who had been involved in Blaeu’s 1654 Atlas of Scotland; John Senex, whose map of Scotland was included in the ninth edition of Patrick Gordon’s Geography Anatomiz’d, or The Geographical Grammar (1722); and the French mapmakers Charles Inselin and Nicolas Sanson. Here in a single image of the nation is what Cowley called ​‘the Disagreement among geographers in their Representations of the Extent and Situation of the Country’.

Cowley’s response was to produce a new map of his own — ​‘A New Map of North Britain’. However, as he wrote at the time: ​“I was much discouraged to pursue it when I reflected on the Discord that appears among the Works of so many able Geographers, and the Impossibility of either reconciling them to each other, or of framing what may justly bear the Title of a correct Map, without the Assistance of a Survey of the Whole Kingdom”. He proceeded, however, ​“in hopes that my Errors may induce some more capable Person to furnish the World with a more correct Map”.