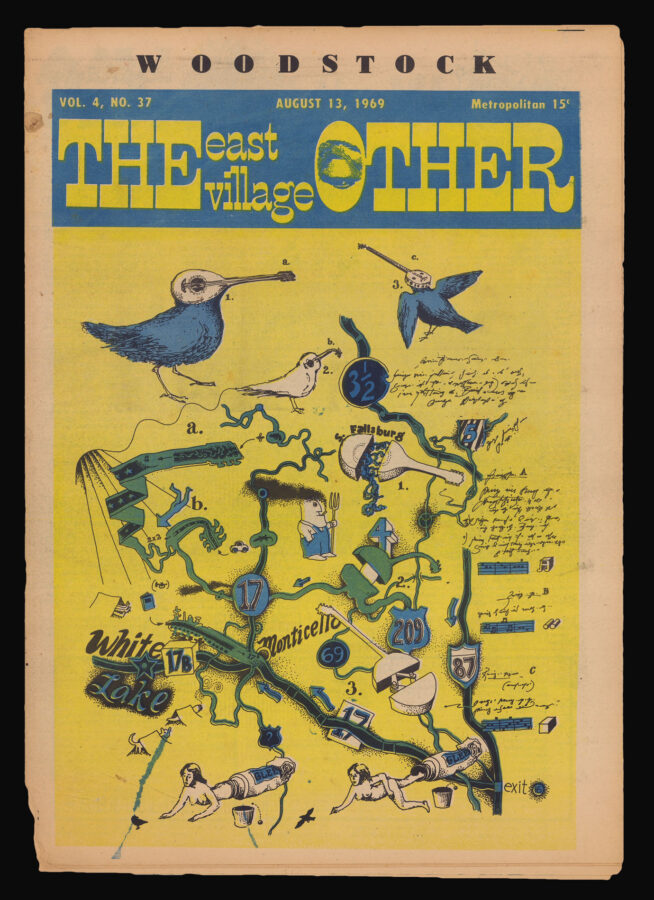 The summer of love

The East Village Other (often abbreviated as EVO), was an American underground newspaper in New York City, New York, issued biweekly during the 1960s. It was described by The New York Times as ​“a New York newspaper so countercultural that it made The Village Voice look like a church circular”.

Published by Walter Bowart, EVO was among the first countercultural newspapers to emerge, following the Los Angeles Free Press, which had begun publishing a few months earlier. It was an important publication for the underground comix movement, featuring comic strips by artists including Robert Crumb, Kim Deitch, Trina Robbins, Spain Rodriguez, Gilbert Shelton and Art Spiegelman before underground comic books emerged from San Francisco with the first issue of Zap Comix.

The present edition published August 13 1969, devotes the front cover and much of the contents to the famous Woodstock Festival of ​’69.

This is how the BBC reported it at the time:

Thousands of young people are heading home after three days and nights of sex, drugs and rock and roll at the Woodstock music festival. An estimated 400,000 youngsters turned up to hear big-name bands play in a field near the village of Bethel, New York state in what has become the largest rock concert of the decade. About 186,000 tickets were sold so promoters anticipated that around 200,000 would turn up. But on Friday night, the flimsy fences and ticket barriers had come down and organisers announced the concert was free prompting thousands more to head for the concert. Traffic jams eight miles long blocked off the area near White Lake, near Bethel, some 50 miles from the town of Woodstock. Local police estimated a million people were on the road yesterday trying to get to Woodstock. They were overwhelmed by the numbers but were impressed by a good level of behaviour. The festival’s chief medical officer, Dr William Abruzzi told Rolling Stone magazine: ​“These people are really beautiful. There has been no violence whatsoever which is really remarkable for a crowd of this size.” Those who made it to the makeshift venue were treated to performances by Janis Joplin, The Who, Grateful Dead, Canned Heat, Crosby, Stills, Nash & Young, Jimi Hendrix, Joan Baez and Ravi Shankar.

Rainstorms failed to dampen the spirits of the revellers, many high on marijuana, some dancing naked in the now muddy fields. The main organiser, 49-year-old dairy farmer Max Yasgur, who provided $50,000 and 600 acres of his land, addressed the crowds on the last day of the event. ​“You have proven something to the world… that half a million kids can get together for fun and music and have nothing but fun and music.” There were however two deaths — a teenager was killed by a tractor as he lay in his sleeping bag and another died from a drugs overdose.“

The map to the front cover captures some of the drug-fuelled psychedelia of the festival in its wonderful surrealist work. The Woodstock poster logo of catbird and guitar, originally created by New York artist Arnold Skolnick for the 1969 Festival is radically transformed here, as these two motifs merge into a trio of strange guitar-headed birds, each presumably representing one of the three days of the festival. A further three guitars open up to reveal strange hidden contents, perhaps a symbolic metaphor for the amazing range of music that was expected to follow in the coming weekend. Further to this roads are seen transformed into electric leads, and guitar straps. In the foreground two naked women emerge from tubes label ​“Glee”.