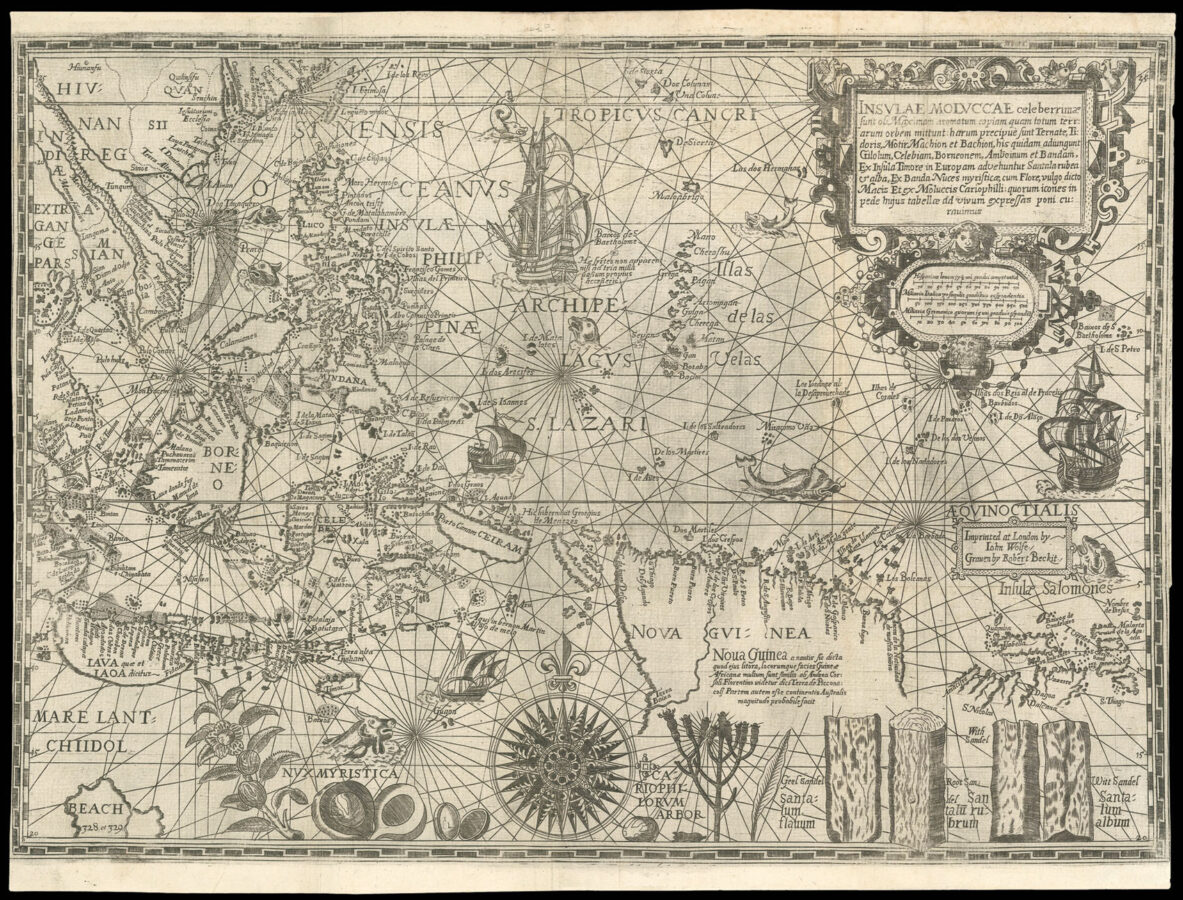 The English edition of Plancius’s chart of the islands of the East Indies, engraved by Richard Beckit for Linschoten’s ​‘Discours of Voyages into ye Easte & West Indies’. The original was engraved by Johannes à Doeticum, c.1594, to help the Dutch break the Portuguese monopoly on the spice trade in the East Indies.

Following the successful Dutch rebellion against their Spanish over-lords in 1579, the Dutch struck out to take a share in the lucrative trade in spices from the Far East. In 1592 Petrus Plancius, a cartographer and Flemish minister in the Calvinist Reform Church, sponsored a covert mission to obtain confidential Portuguese manuscript charts from Lisbon. The Houtman brothers, Cornelius and Frederick, acquired twenty-five manuscript charts by the Portuguese cartographer, Bartolomeu Lasso, from which Plancius compiled this map. It was first published as a loose sheet in 1595, but it was also bound into some copies of Linschoten’s ​‘Itinerario’.

Cartographically the map is a huge improvement on previous printed maps of Southeast Asia with the Sunda Islands, the Moluccas, and much of the mainland coast well-delineated. The large islands of the Philippines, such as Luzon and Mindanao, are well-drawn, and although the cluster of islands between them are crude, they are at least well placed and correctly named. Palawan is confused with the ​‘Calamianes’ a group of small islands to its east. To the southeast a vast New Guinea has been tentatively assigned to the, theoretical, ​‘southern continent’; Plancius confuses its west coast, present-day Irian Jaya, with the island of Seram (Ceriam), upon which he places the the Guinean port of ​‘Canam’. This confusion was to be compounded by Linschoten a year later and was depicted by Rossi on his map of 1680. On the mainland the fictitious trans-peninsula waterway is shown, as is a phantom lake, dotted with islands, west of Siam. Plancius curiously omits Singapore. At the bottom of the map he depicts the various commodities that the islands have to offer — the key to any prospective Dutch investor. These include cloves (Caryophilorum Arbor), nutmeg (nux Myristica) and sandalwood (Santulum fluvium).