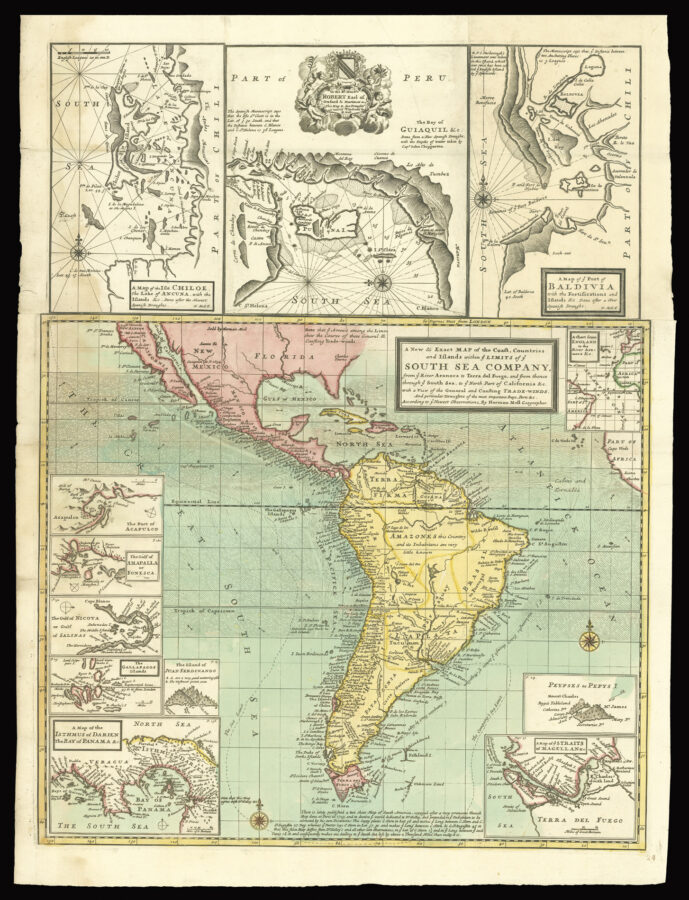 The South Sea Company and the Darien Scheme

A New & Exact Map of the Coast, Countries and Islands within the Limits of ye South Sea Company…

The map stretches from the Caribbean to Terra del Fuego, and features twelve inset maps, including the Gallapagos Islands,I sle Chiloe, Acapulco, the Isthmus of Darien, Straits of Magellan, Juan Fernando, the Gulf of Nicoya, the Gulf of Fonseca, Port Baldivia (Valdivia), the sea route from England to the Orinoco, the Bay of Guayaquil, and, interestingly, an inset of the phantom Pepys Island.

The Darien map marks the location of New Edinburgh, the capital of the ill-fated Darien Colony ​‘Caledonia’, which was to bankrupt a large part of Scotland.

The South Sea Company was a British joint stock company that traded in South America during the 18th century. Founded in 1711, the company was granted a monopoly to trade in Spain’s South American colonies as part of a treaty during the War of Spanish Succession. In return, the company assumed the national debt England had incurred during the war. Speculation in the company’s stock led to a great economic bubble known as the South Sea Bubble in 1720, which caused financial ruin for many. In spite of its failures, it was restructured and continued to operate for more than a century after the Bubble.