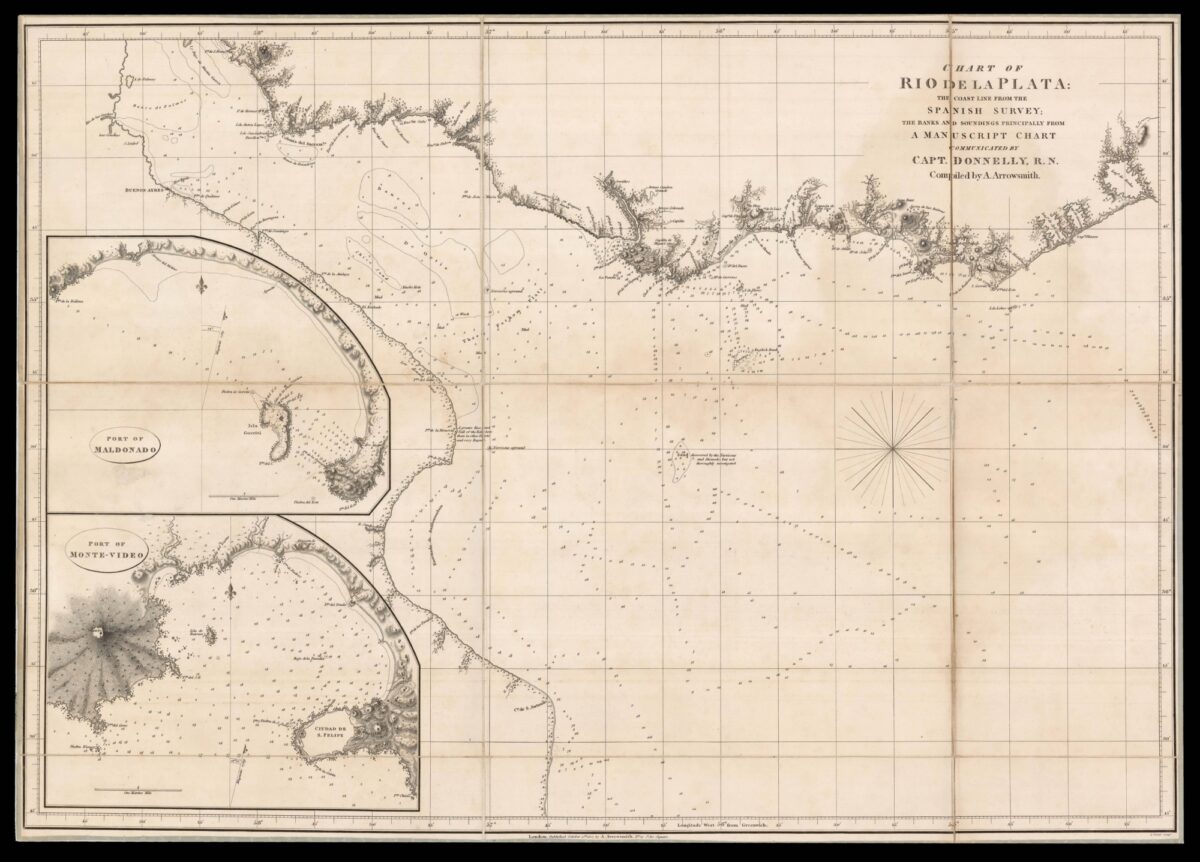 The River of Silver

Chart of the Rio de la Plata: The Coast Line from the Spanish Survey; The Banks and Soundings Principally from a Manuscript Chart Communicated by Capt. Donnelly, R.N.

The Rio de la Plata – River of Silver, is the estuary at the confluence of the Uruguay and Parana Rivers where they empty into the Atlantic Ocean; and now marks the border between Argentina and Uruguay. Arrowsmith’s chart is detailed, extending from Buenes Aires eastward to just beyond Maldonado; and southeast to present-day San Clemente del Tuyu. There are large insets of the ​“Port of Maldonado” and ​“Port of Monte-Video”.

The chart, which is based on a Spanish chart seized during the first British invasion of Buenos Aires of 1806, is also timely, issued, as it was, shortly after the second British invasion of the area, in July of 1807. It updates Arrowsmith’s previous chart of the area, ​‘Chart of Rio de la Plata, from an actual survey’ (1798), in just about every way.

British Invasion of the Rio de la Plata.
The invasion was an attempt by the British to open a new theatre of war against the Spanish and French alliance by attacking Spanish interests in South America; and availing themselves of the strategic natural harbours, productive agricultural lands, and a point of access to the wealth of South America’s interior.

To this end, a force was sent to gain control of the Rio de la Plata by conquering the dominant city of Buenos Aires. On June 27, 1806, a British force of some fifteen hundred men, under the command of Colonel William Carr Beresford, occupied the city, and relieved the treasury of all its silver and gold. They held control for about six weeks, before surrendering on the 14th of August to a militia consisting of five hundred and fifty veterans and four hundred soldiers, led by Santiago de Liniers y Bremond, a French nobleman and mercenary in the service of Spain, from his base in Montevideo.

A second, better-resourced, invasion followed in 1807. This time, the British attended to Montevideo first. Under the leadership of Brigadier-General Sir Samuel Auchmuty, they seized Montevideo early in February of 1807, holding the city for several months. To the west, a force of ten thousand men, under the command of Lieutenant-General John Whitelocke, attacked Buenos Aires on the 1st of July. The British were, however, ill-prepared for urban combat and the local forces eventually overwhelmed them. The British suffered substantial losses, and General Whitelocke signed an armistice with de Liniers on the 12th of August and left for home.

These two resounding victories were achieved with little help from Argentina’s colonial master Spain, and have led many to cite them as important mile-stones along the road to Argentine Independence.

Captain Sir Ross Donnelly (c1761-1840)
A long career in the navy saw Donnelly serve in the Atlantic during the American Revolutionary War, and with Nelson in the Mediterranean. In 1805, aboard the Narcissus, he accompanied Sir Home Riggs Popham, first to the Cape of Good Hope, and then to the Rio de la Plata, where he was part of the first invasion of Buenos Aries of 1806. He and Popham returned to England with much of the city’s seized treasury and other material, including the manuscript chart on which Arrowsmith’s map is based. Donnelly returned to the Rio de la Plata for the second British invasion, aboard the Ardent and in command of a convoy of transports. ​“At the capture of Montevideo he commanded the naval brigade, and rendered important service both in transporting the heavy guns and in erecting batteries” (J.K. Laughton for DNB).

Rare: No example of this issue of the chart has been offered at auction in available records; Dorothy Sloan, offered an example in 1990, Catalogue 7, possibly this example; OCLC only records two examples of the later edition of this chart, from 1809.