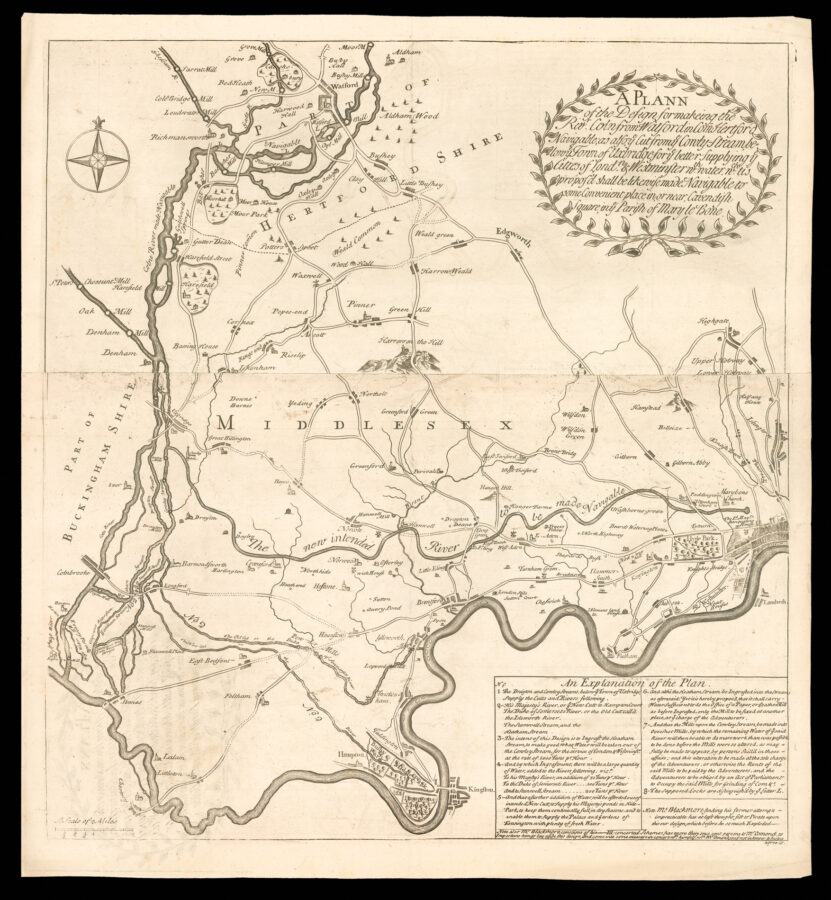 A Plann of the Design for makeing the Rivr. Coln from Watford in Com Hertford Navigable Cut from ye Cowly-Stream, below ye Town of Uxbridge; for ye better Supplying ye Cities of Londn. & Westminster w.th water w[hi]ch tis propos’s shall be likewise made Navigable to some Convenient place in, or near, Cavendish Square, in ye Parish of Mary le Bone.

This is the largest of the various maps associated with the various proposals for the River Colne Navigation. The map was first published as a single-sheet (with a different title) and then subsequently revised and updated reflecting the ebb and flow of the successive proposals, objections and counter-proposals placed before Parliament and the public between 1719 and 1723. This is the third identified state of the map, now on two sheets, with the new title as above.

In the text, ​‘An Explanation of the Plan. …’, Acherley gives a relatively detailed discussion of his own proposals, clearly directed towards a knowledgeable reader, presumably therefore to be distributed as part of his application to Parliament. However, he was also unable to resist a criticism of the rival scheme (and its proposer):
​“Note Mr. Blackmore finding his former attempts impracticable has at last thought fitt to Pirate upon this our design, which before he so much Exploded_​_​[rule] Note also Mr Blackmore conspicuous of his [erasure] Ill concerned Schemes, has more then once sent persons to Mr. Osmond, to Importune him to lay aside this design, and come into some measurs in concert w.th himself, w[hi]ch Mr. Osmond, could not in honour & justice agree to.“