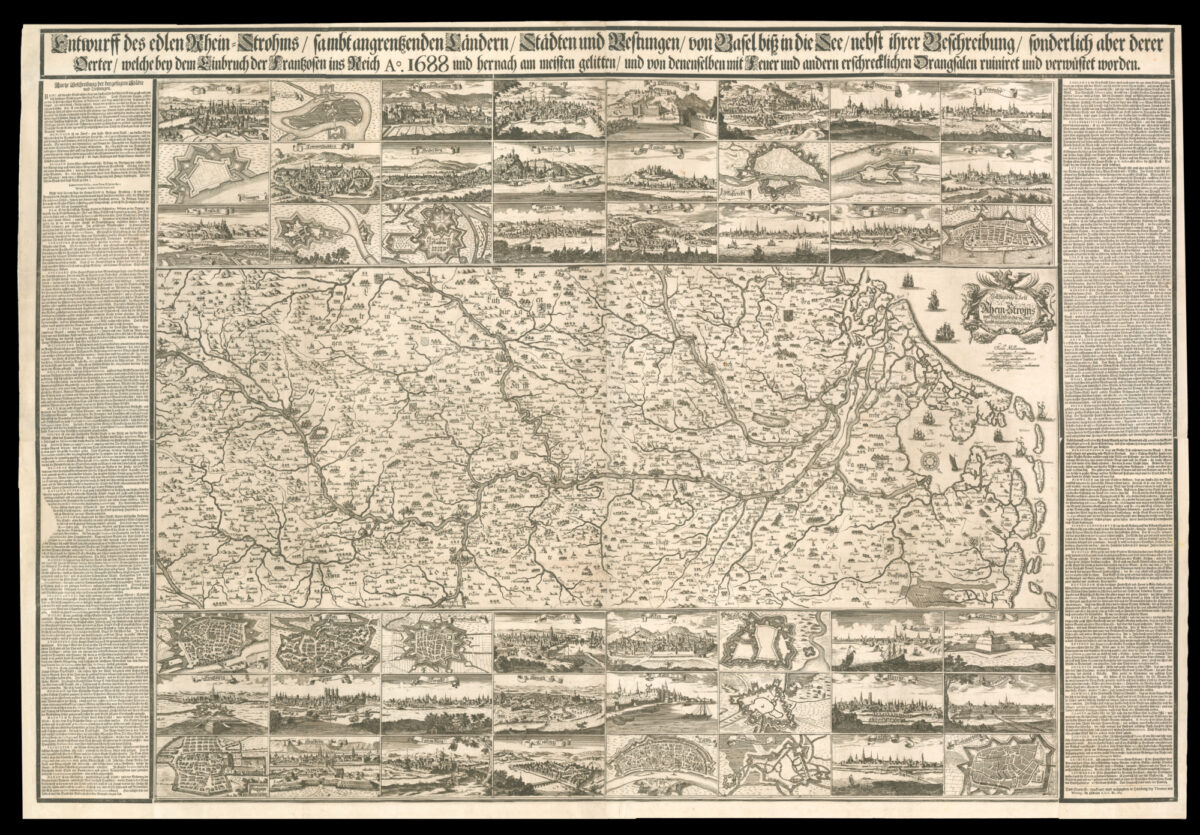 Large engraved plan of the Rhine and the surrounding countryside from its mouth to Basel.

Surrounding the map are 48 bird’s-eye views of towns and cities within the Rhineland and its environs, together with two columns of text to the left and right margins, providing information upon the towns and cities. The work was produced during the early years of the War of the Grand Alliance, fought between Louis XIV and a European coalition trying to quash his territorial ambitions. It marks the moment when Louis’s army crossed the Rhine as a prelude to invading Philippsburg, the key post between Luxembourg (annexed in 1684) and Strasbourg (seized in 1681), and other Rhineland towns. This pre-emptive strike was intended to intimidate the German states into accepting his conditions, set out in his ​‘Mémoire de raisons’, while encouraging the Ottoman Turks to continue their own struggle with the Emperor in the east.

The action was initially successful: Louis took control of the Rhineland from south of Mainz to the Swiss border. However, rather than capitulating, his actions galvanised the League of Augsburg into action. Louis soon realised he would not gain a short sharp victory, and so decided to put a scorched earth policy into effect in the Palatinate, Baden, and Württemberg instead. The aim was to deny enemy troops local resources and prevent them invading French territory. By 20 December 1688, Louis had selected all the cities, towns, villages, and châteaux intended for destruction. On 2 March 1689, the Count of Tessé torched Heidelberg; on 8 March, Montclar levelled Mannheim; Oppenheim and Worms were finally destroyed on 31 May, followed by Speyer on 1 June and Bingen on 4 June. In all, French troops burnt over 20 substantial towns as well as numerous villages. The destruction wrought by the French forces is explicitly mentioned in the title of the present map, and within the text to the right and left border.

Rare; we are able to trace only one institutional example: Norrköpings Stadsbibliotek, Sweden.