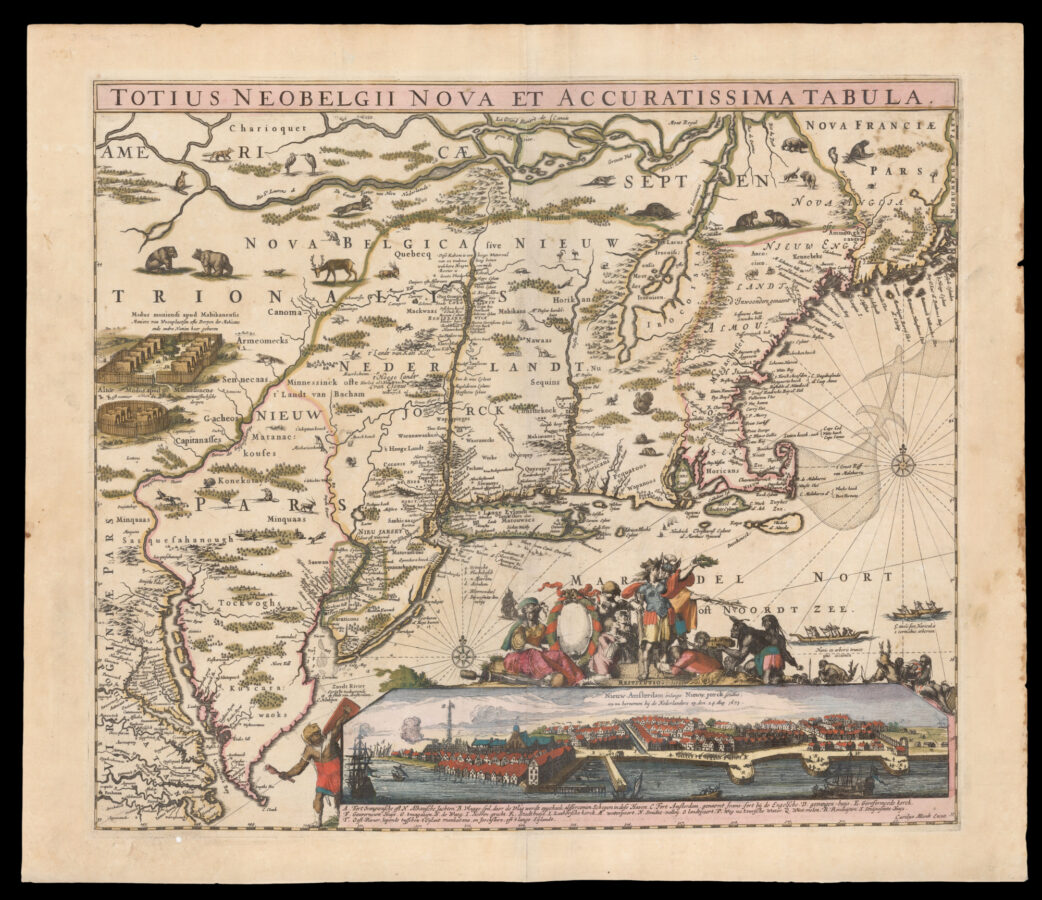 A finely coloured example of the fourth state (out of seven) of Hugo Allard’s map depicting Dutch lands in New York and New England – a part of the Jansson-Visscher series. Hugo Allard’s imprint has here been replaced by that of his son and successor, Carel Allard.

Allard’s version of the Janssonius Visscher map was originally published in 1656. The short-lived Dutch reconquest of Manhattan in 1673 led Allard to reissue the map, replacing the famous view of New Amsterdam by Nicolas Visscher with the current ​‘Restitutio view.’ Allard’s new version shows a greatly expanded city, indicative of the widespread prosperity enjoyed during the first English occupation of 1664–1673. At the far right is the Dutch wall, which would later become Wall Street. It is apparent that the city has already begun to spread beyond this wall to the north. Fort Amsterdam, shown as a cannon fires from its ramparts, can be seen at the left just below Bowling Green. At centre, shown complete for the first time, is the new canal (now Broad street) that cut into the city from the harbour. Cornelius Evertsen’s fleet is shown at the far left, here being celebrated for recapturing the city in 1673. However, the Dutch would permanently cede New Amsterdam to England by treaty the following year.

A blank medallion above the view was probably intended to contain the arms of the House of Orange. The fact that it was left blank suggests that the map was still unrevised when New Amsterdam was reconquered by the English in October 1674. The main body of the map, depicting the Dutch and English colonies in the Northeast, (from the Dutch point of view) derives from a manuscript by an unknown mapmaker that accompanied the famous Remonstrance that Adriaen van der Donck took to Amsterdam in 1649. The map served as the source for Dutch maps of the region for nearly a century. One of van der Donck’s hopes had been that more Dutch people would be enticed by an attractive rendition of vast unsettled Dutch American lands, teeming with game, that stretched from the Delaware River to the Connecticut. Life was too comfortable in the Netherlands however, and the small, very diverse, population that settled New Amsterdam and Fort Orange was soon overwhelmed by the ever swelling tide of hopeful English immigrants.

The Visscher and Allard maps also played a major role in the Penn – Lord Baltimore boundary dispute, in which king divided the Delmarva Peninsula between Maryland and Pennsylvania from the 40th degree of latitude in the north and a latitudinal line drawn from Cape Henlopen in the south. Unfortunately for Maryland, Cape Henlopen was incorrectly positioned on this map 25 miles too far south – consequently, land that ought to have been Maryland went to the Penn family.