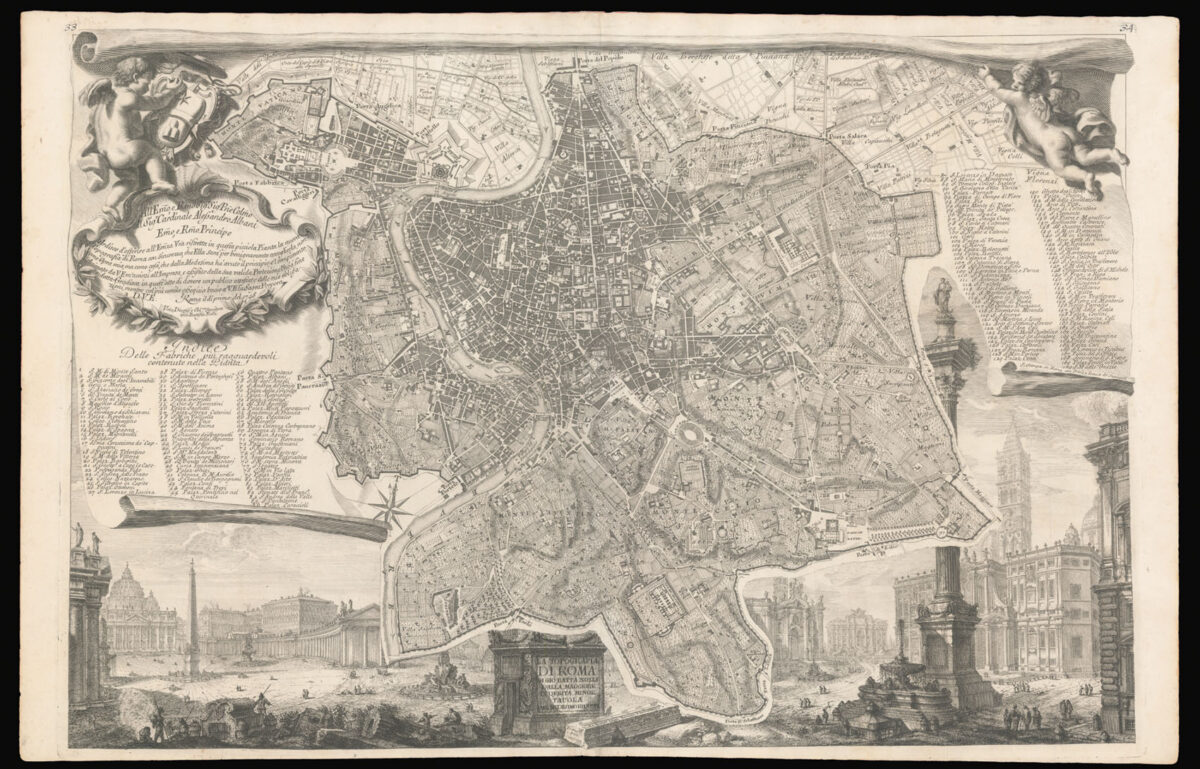 The reduction of Nolli’s great plan of Rome

A reduced version of Nolli’s monumental plan of Rome — the finest of the eighteenth century plans of the city and the first based upon geodetic principles. This map, printed on a single sheet, appeared just after the index in the same sequence as the larger plan. However, it is a not a key map to Nolli’s 12-sheet plan, as it shows slightly less of Rome’s surrounding countryside and has entirely different ornamentation.

With Rocque’s plan of London and Bretez’ plan of Paris, Nolli’s plan (here re-engraved by his son Carlo) ranks as one of the greatest eighteenth century maps of any European city. Rome essentially appears in its Renaissance form, with large areas within the ancient walls still occupied by villas with extensive fields, orchards, and gardens. The Colosseum, for example, still stands in virtually open country. Many important ancient sites, such as the Circus Maximus and the Forum, are shown in an unearthed state.

The map’s borders are almost entirely taken up by lavish ornamentation, finely engraved by the celebrated Venetian artist Giovanni Battista Piranesi. There are a pair of putti in the upper corners, one of whom is holding the dedicatee’s coat of arms while the other unfurls a trompe l’oeil scroll bearing the map and its key. The lower left corner contains a view of Saint Peter’s Basilica, Bernini’s spectacular piazza and the Vatican obelisk. The lower right corner shows Roman ruins surrounded by more recently constructed Renaissance and Baroque monuments, such as Santa Maria Maggiore and the Trevi Fountain. The foreground of these views is taken up by ancient ruins, contrasting starkly with the more orderly grandeur of the Renaissance and Baroque architecture in the background. The title of the map appears as an inscription on one of these ancient ruins, and the map’s scale and engravers’ signatures can be found hiding on a stray pediment.

This plan is dedicated to Cardinal Alessandro Albani (1692–1779), one of the leading patrons of the arts in 18th century Rome and a notable collector of antiquities.

Giovanni Battista Nolli (Como 1701 — Rome 1756) was born into a family of surveyors and builders active in Lombardy. He started his career at the Land Registry in Milan, newly set up by Charles VI of Austria. There, he was introduced to the latest methods of surveying and mapping, which included the use of the plain table, an instrument that provided for more accurate and efficient drawings, compared to the standard systems. Nolli moved to Rome in 1736, where he soon became part of a circle of antiquarians and intellectuals who were planning a new and most exact map of the old and new city. Nolli’s experience in Milan proved extremely useful, and he quickly took the lead on the project, which was set off by Cardinal Guadagni granting him with a permit to enter churches and enclosed monasteries in order to take the most accurate measurements. The resulting plan was easily the most precise ever made of the city, and it naturally became the basis for most the subsequent mapping of the city.