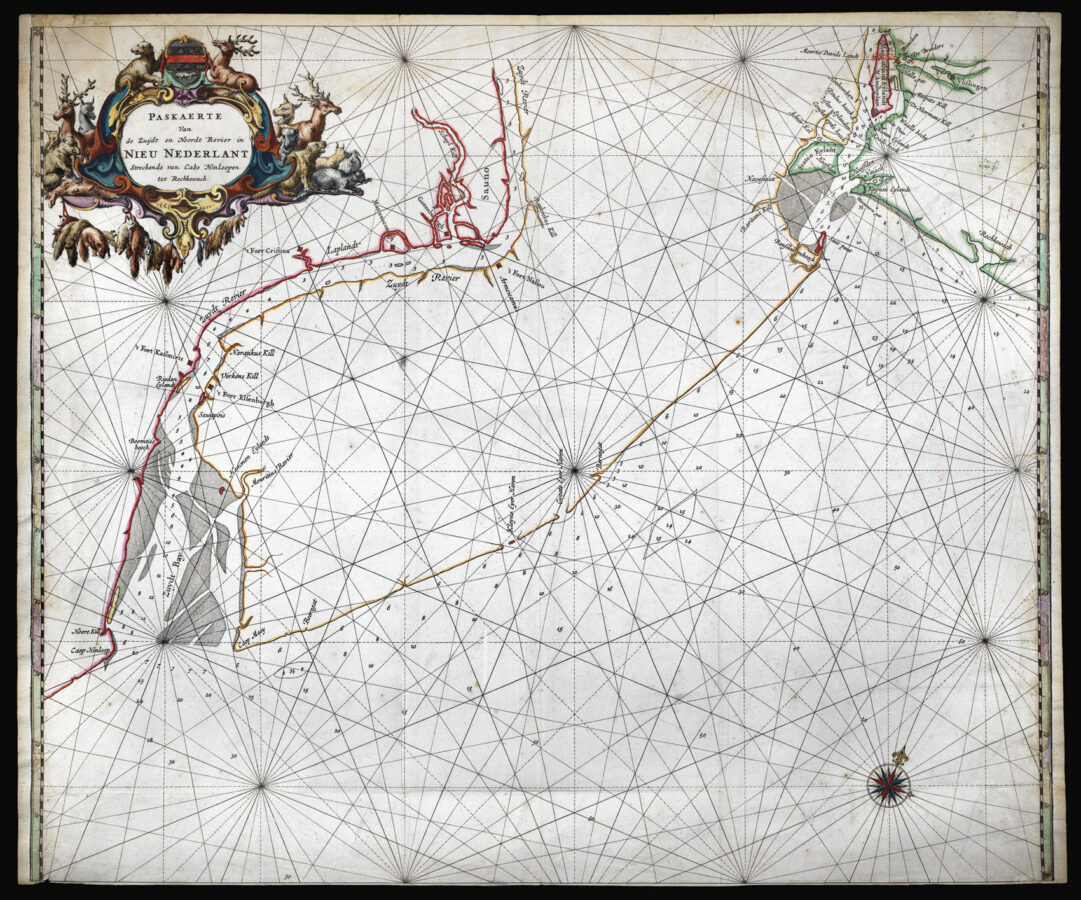 The rarest of the Goos charts of North America

The first map of present-day New Jersey, and the most detailed map of the region of New Amsterdam, or New York, to date.

Probably first published separately and possibly before ​‘De Zee Atlas ofte Water-Weereld’, the chart is larger than the others included in the atlas. It may also have been included upon request, as it is not often listed in the index. Burden describes it as the rarest of the Goos charts of America.

It illustrates the water route between New York Bay and the Delaware Bay, including detailed depth soundings. Delaware Bay was important because it controlled access to the Delaware valley and thus the fur trading operation at Fort Nassau, and later Fort Orange, at the top of the Hudson River. It was therefore contested throughout the seventeenth century, and the present chart was perhaps made as part of the effort to reassert New Netherland’s control over the area following years of turbulence with other European powers in northeast America.

The chart is centred on what ​“was the lower half of the New Netherlands, which was made up of two distinct colonies, New Amsterdam under the control of the Dutch West India Company, and Nieuwer Amstel on the Delaware River. In 1638, the Swedish colony of ​‘t Fort Cristina’ was built by Peter Minuit, the same person who had ​‘bought’ Manhattan Island for the Dutch from the Indians over a decade earlier. Although this was not far from the Dutch fort of Nassou they lived harmoniusly together. Later the Swedish built two more forts, ​‘t Fort Elsenburgh’ down river in 1642, and ​‘Gottenburgh’ closer to Fort Nassau in the following year.

​“The Dutch under Peter Stuyvesant responded by building ​‘t Fort Kasimiris opposite Fort Elsenbugh in 1651. This was captured by the Swedes in 1654. The following year the Dutch captured the entire Swedish colony. The area of Fort Christina was sold by the company to the city of Amsterdam in 1656. They founded the colony of Nieuwer Amstel, which fell to the English in 1664. Interestingly, the coat-of-arms in the cartouche is that of this small colony, and, if the beaver is removed, it matches that of the town of the same name near Amsterdam” (Burden).

There is only one known state of the map, and in fact the plate was later reused in a fit of economy by Joannes van Keulen, who in 1681 erased Goos’ work and replaced it with a chart of the Baltic Sea, for his ​‘Zee-Fakkel’. He did, however, preserve the tell-tale cartouche depicting animals of the fur trade.

Pieter Goos (1616–1675) was one of the most important of the booksellers in Amsterdam during the second half of the seventeenth-century. His first pilot book was the ​‘Zee-Spiegel’ of 1650, covering largely European waters; the ​‘Zee Atlas’ covered the whole world. Goos’ atlases and pilots were designed for the armchair traveler rather than as navigational aids, with his prospective clients ​“Heeren en Kooplieden” (gentleman and merchants) before ​“Schippers en Stuurlieden” (pilots and seamen). This land-based market improved the atlas’ survival rate over others of the period.