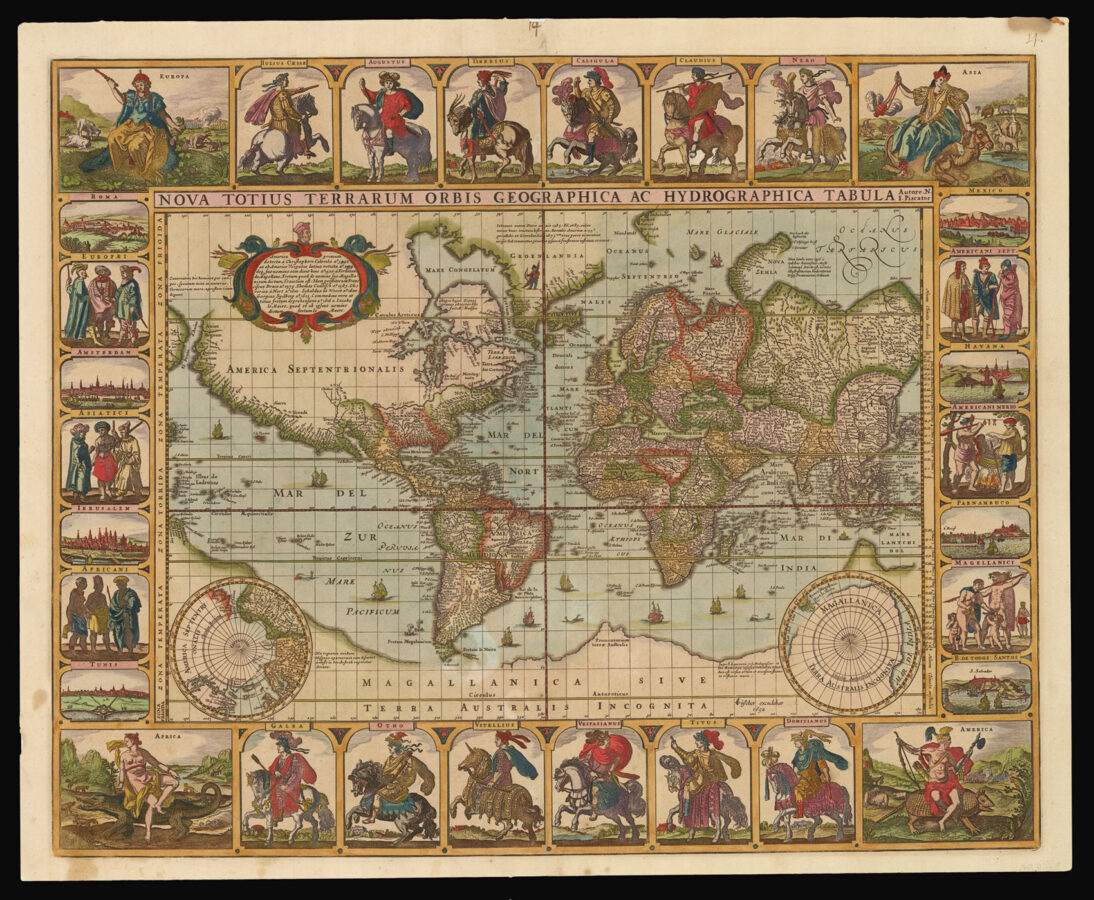 The rare twelve Ceasars map of the world

A superb example of the fifth and final state of Visscher’s iconic and very rare map of the world on Mercator’s projection. Decorated in a high baroque style the map is known as the twelve Caesars map because the broad border surrounding it contains vignettes along the top and bottom edges of Suetonius’s Twelve Caesars, or Roman emperors, each named and on horseback. Each vertical border to the left and right of the map alternates images of major cities and settlements from around the globe, with ethnographic depictions of native peoples. From top left to bottom right these are Roma [Rome], Europaei [Europeans], Amsterdam, Asiatics [Asians], Jerusalem, Africani [Africans], Tunis, Mexico [City], Americani Sept. [North Americans], Havana, Americani Merid. [Central Americans], Parnambuco [Pernambuco], Magellanici [South Americans], and B. [Bodega] de Todos Santos in San Salvador. At each corner of the border appear female personifications of the four corners of the earth: Europe, Asia on a camel, Africa on a crocodile, and America on an armadillo.

Within the map itself the world is presented on Mercator’s projection with a grid of latitudes and longitudes, dissected by the Equator and the meridian running through the middle of the Atlantic. While retaining some myths, such as Greenland being attached to North America, a great south land ​“Magellanica sive Terra Australis Incognita”, and the Strait of Anian linking the Atlantic and Pacific oceans, the cartography is current for the period. The discovery of Hudson’s Bay is shown and the course of the St. Lawrence river. The Straits of le Maire and Magellan appear. The peninsula Beach, based on the reports of Marco Polo, is in the region that would become Australia, and the early Dutch discoveries in what would be confirmed as northern Australia extend towards New Guinea. California appears correctly as a peninsula, but the extended Californian coastline continues northwards to the Straits of Anian, only a few short miles from northeast Asia.

Two small polar projections appear in each corner, re-stating the existence of the Straits of Magellan, Le Maire, and Anian. The title is in a banner across the top of the map inside the decorative border, a legend detailing the discoveries of Columbus, Vespucci, Magellan, Francis Drake, Thomas Cavendish, de Weert, Spilberg and Le Maire, appears within a decorative cartouche upper left. Within the legend the dates 1492 and 1499 have been re-engraved to correct a recurring error from earlier issues and transferred from Visscher’s companion double-hemisphere world map of 1638.

The original engraver of this extraordinary map, when it was first issued in 1639, is not known, but Shirley suggests that it was probably Pieter Goos (1615–1675) who engraved and signed the companion double hemispherical world map published a year earlier (Shirley 346) that is in a similar style. Goos would goon to published one of the most spectacularly beautiful marine atlases of the Dutch Golden Age.

This is the fifth and final state of the map, identified by the inclusion of the date 1652 within the map next to Visscher’s imprint, and one of the last maps published by Claes Jansz Visscher before his death in 1652. As his name suggests, his grandfather had been a fisherman, and fishermen are a recurring theme throughout Visscher’s engravings. He first emerged as a printmaker from number 8 Roomolenstteeg, Amsterdam. By 1605 he was working for Willem Jansz Blaeu on his monumental world map printed on twenty plates. Blaeu also published a number of Visscher’s individual etchings from designs by David Vinckboons, who may have trained Visscher in the art of etching and engraving. By 1608 Visscher was signing his name as the creator and publisher of his own works. In 1611 he acquired a house in the prestigious Kalverstraat, between Dam Square and the Stock Exchange, and from there built up an impressive stock of maps, city views and other topographical prints. ​“In due course he became Amsterdam’s most productive and innovative print publisher. It is estimated that a thousand or so prints were produced in Visscher’s workshop and more than four thousand others were printed from bought in second-hand plates, making the print publisher one of the largest in Europe. Later the print publishers Jodocus Hondius I, Cornelis Danckerts, Hugo Allardt, Frederick de Wit, Justus Danckerts and Clement de Jonghe also set themselves up in Kalverstraat, creating a huge concentration of activity in print making and print dealing” (Leefland).

Despite his formidable output and stock, we know little about Claes Jansz Visscher the man. He married Neel Floris (1588–1638) in 1608 and they had ten children, five of whom reached adulthood. There is no surviving portrait of Visscher. As a strict Calvinist, he had burnished out all images of God from older plates he had purchased. Visscher’s career is a perfect example of the social mobility that was possible during the Golden Age. Alongside the print business, he and his family made a fortune buying property in the booming Amsterdam real estate. Claes Jansz’s son Nicolaes (1618–1679) joined the business, probably at an early age. After the death of his father in 1652, he continued the business until his own death, and was then followed by his son Nicolaes II until 1702, when his wife Elizabeth Verseyl successfully continued the business until her death in 1726. Thereafter the shop came into the possession of the publisher Andries de Leth.