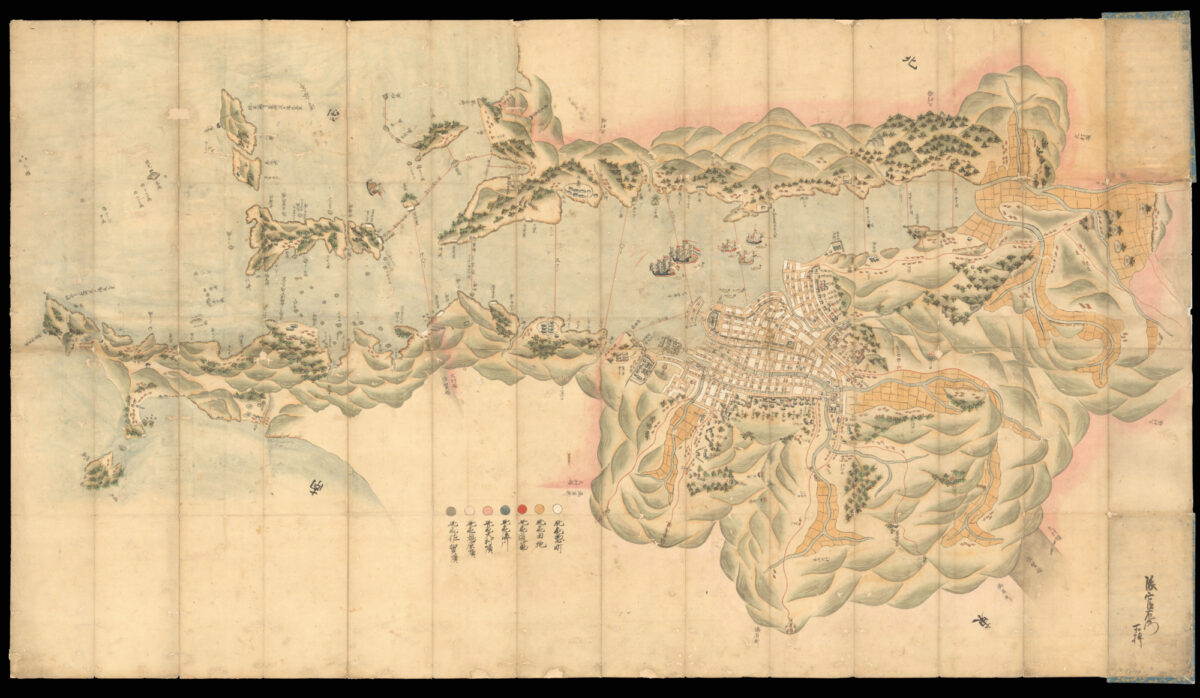 The port and city of Nagasaki

A detailed manuscript plan of Nagasaki that predates the earliest printed map of Nagasaki made in 1745 (McGovern, Imago Mundi Vol.15, 1960), and the first dated map of Nagasaki which was published in 1752. It shows navigation into Nagasaki, the town, its layout and surrounding areas, orientated to the North West, names in Japanese Katakana and classical Chinese, signed in lower right corner ​“Chokanemon”.

The city, streets, temples, shrines, waterways, ships and boats, gardens and fortifications are clearly depicted. Most of these features are labelled on the map. The small fan-shaped island in the bay is Dejima, an artificial island built in 1634 to house Portuguese traders who were expelled in 1639. It was subsequently taken by the Dutch V.O.C. trading out of Batavia in 1641. During most of the Edo period Dejima was the single place of direct trade and exchange between Japan and the outside world. Above Dejima are two Dutch trading ships with flying flags and several local vessels. At that time, the Dutch sent out ships on a yearly base to Nagasaki. The printed maps are all of a later date and are showing therefore more ships.

To the south west of Dejima is the Tojin district where the Chinese lived, shown with small buildings with blue roofs. It was an important conduit for Chinese goods and information for the Japanese market. The plan clearly marks the Shorikisha, the largest Shinto shrine, and Yakusho, the administration building supervising foreigners and overseas trade, as well as numerous Buddhist temples and several rice warehouses.

A scale of seven colours is given to indicate different domains, starting from the left: grey for the lands of the feudal lord, yellow for Shimabara land, violet for Omura family land, blue for water, red for roads, dark yellow for rice fields and white for the city centre.

Nagasaki was a small fishing village in the 16th century but grew to be one of the most important cities in Japan by the late 17th century, since it was the only foreign trading port and brought considerable wealth to the city. It was also a place where European ideas began to infiltrate Japanese society in thought, medicine and science.