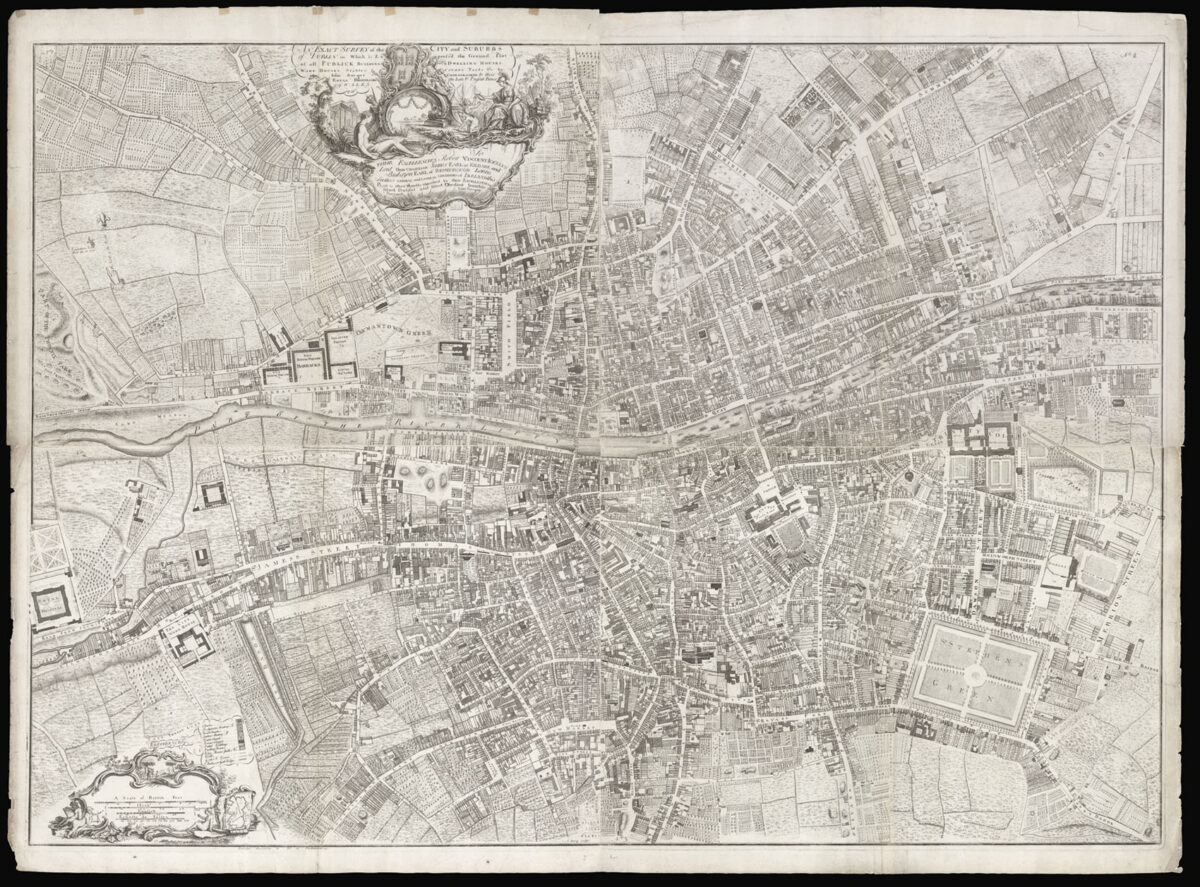 “the peak of eighteenth-century urban surveying in Ireland”

An Exact Survey of the City and Suburbs of Dublin in which is express’d the Ground Plot of all the Publick Buildings, Dwelling Houses, Ware Houses, Stables, Court Yards &c by John Rocque Chorographer to their Royal Highnesses the Late and Present Prince of Wales.

“Rocque’s Exact Survey of Dublin (Dublin, 1756) can be considered the apex of the city’s eighteenth-century cartography. Rocque’s ability to organise and overcome logistical problems separates him from contemporary Irish surveyors and elevates him to the zenith of eighteenth-century surveying in Dublin. He introduced a revolutionary change in cartographic style, method and relationship with geographic data into Irish mapping not seen since the arrival of William Petty almost a century before” (O’Cionnaith).

Rocque moved to Dublin from London in early 1754, in order to survey Dublin and its environs on the same scale as his monumental plan of London – two hundred feet to an inch. An advertisement was taken out in the summer of 1754, setting out the extent of the plan and soliciting subscriptions. Rocque began surveying at the beginning of September of that year. The survey would take Rocque two years, with the plan being published on four sheets in 1756.

One of the most striking differences between Rocque’s plan of Dublin and his plan of London is the level of detail in the Dublin map. Rocque picks out every building within the city: 11,645 in total, with separate hatching included to distinguish between residences and business. As the title makes plain, the plan delineates ​“all publick buildings, dwelling houses, ware houses, stables, courts, yards &c”. Also depicted are numerous places of worship including Anglican churches, ​“Roman chappels”, French churches, Presbyterian, and Quaker meeting houses. At the time of printing Dublin’s population was around 100,000; the city having greatly expanded from its medieval origins. The castle dominates to the right; not far to the south is St Patrick’s Cathedral, where Jonathan Swift was dean. To the right of the plan are Trinity College Dublin, Parliament House, and the fashionable St. Stephen’s Green to the south. To the left the Barracks, Royal Hospital and the City work house are clearly marked. The numerous ships on the River Liffey show the source of the city’s wealth.

Rocque’s plan was a substantial improvement on Charles Brookings’ plan of 1728, and would continue to be the standard plan of the city for the rest of the eighteenth century. Rocque continued to work in Ireland up until 1760, publishing plans of the environs of Dublin, Thurles, Kilkenny, Cork, Newry, Armagh, and a general map of Ireland.

John Rocque 1761 [and] 1762.
[Berkshire] A Topographical Survey of the County of Berks in Eighteen Sheets. In which is expressed His Majesty’s Royal Palace at Windsor, its Parks and Forrest; the Seats of the Nobility and Gentry; Towns, Villages, Hamlets, Farms, Cottages, &c. with the Main and Cross Roads, Bridle Ways, Pales, Hedges, Hills, Valleys, Rivers, Brooks, Canals, Ponds, Bridges, Ferries, Wind and Water Mills, Woods, Heaths, Commons, and Greens, appertaining to each Parish, &c. To which is added, a geographical and historical index of all remarkable places in the said county; with their bearings and distance to the next market town, or well known place. The length, breadth, circumference, and content, in acres and square miles,of the county, the Windsor Forest, and of each Parish. [together with] A Map of the County of Berks reduced from an actual survey in 18 sheets, by the late John Rocque Topographer to His Majesty, 1762.