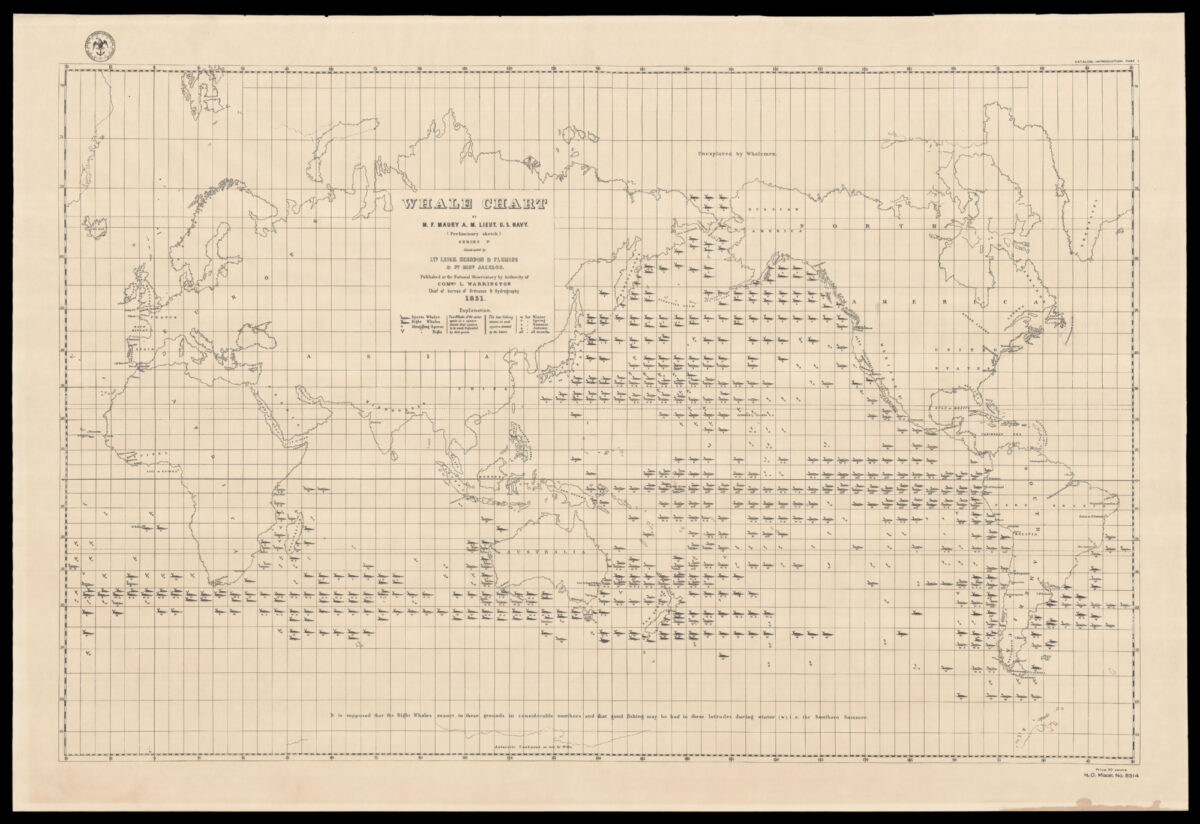 The pathfinder of the seas

Twentieth century example of Maury’s chart, first printed in 1851, here with ​‘H.O. Miscel. No. 8514’, ​‘Price 50 cents’, lower right. The chart shows the distribution of actual whale catches on a global scale, compiled from data extending back to 1830, initially gathered using old whaling log books, but soon Maury was requesting that whalers send in reports of their voyages on forms he had specially prepared for the purpose. At an international oceanographic meeting in Brussels in 1853, Maury persuaded other maritime nations to adopt his methods. His painstaking work was only partly superseded once steamships replaced sailing vessels.

Maury’s Whale Chart, centred on the Pacific Ocean, was of enormous benefit to America’s deep-ocean whaling industry at its peak. The map directly addresses the industry’s concerns over a depleted stock of traditional whales in traditional hunting grounds. Initially, a shore-based activity, the gradual decline in the coastal population of right and sperm whales, in the first decades of the eighteenth century, around Cape Cod and Nantucket, led the whalers farther out to sea and northward into whaling grounds off Newfoundland, the St. Lawrence River and farther north, even into the Straits of Belle Isle along the coast of Labrador and the Davis Straits west of Greenland. Once larger, two-masted schooners replaced smaller sloops, the whalers were able to pursue sperm whales throughout the North and South Atlantic, as far as the coast of Guinea in Africa, and of Brazil in South America. By 1774, the Colonial American whale fleet operated about 360 vessels out of 15 New England and New York ports.

The American Revolution, and the War of 1812, had devastating effects on the American whaling industry. The ships of His Majesty’s Naval service blockaded American ports, and interfered with the whaling ships at sea: capturing and destroying them, pressing their sailors into service. Then, huge duties were applied to the import of whale products into England. Jefferson enacted the Embargo Act, forbidding American ships from embarking on foreign voyages. After the signing of the Treaty of Ghent in 1814, unrestricted American shipping resumed, and whaling ports, grew in strength almost exponentially. By 1841, 75 whaling ships sailed out of New Bedford, reaching its peak in 1857, when the fleet numbered 329 and employed 10,000 men. Using the key provided in Maury’s map, the whalers could calculate the best place, and time of year, for sighting their preferred whale, over a much wider area than they were perhaps used to exploring.

By about 1860, the American whaling industry suffered a gradual decline. The price of whale oil dwindled, with the discovery of petroleum in Pennsylvania in 1859, and the Civil War resulted in the further destruction of an already depleted whaling fleet.

In 1836, Maury (1806–1873), ​“the pathfinder of the seas” (Charles Lee Lewis), wrote the book that established his reputation as the pioneer of oceanography, ​‘A New Theoretical and Practical Treatise on Navigation’. In it he emphasized the necessity of systematically collecting data on winds and ocean currents, which could then be expressed, as here, visually in maps.

As a direct result of his publication, Maury was appointed as astronomer on a U.S. Navy exploring expedition to the Pacific, the following year, in 1837; in 1842, he was appointed superintendent of both the Depot of Charts and Instruments of the Navy Department in Washington, D.C., and the Naval Observatory, during which time this Whale Chart was issued for the first time.