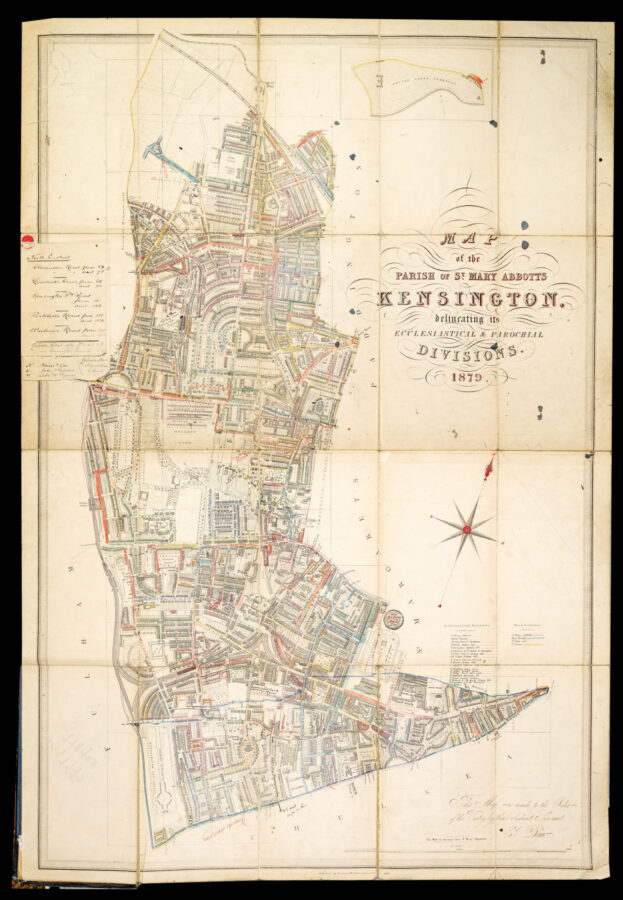 Map of the Parish of St. Mary Abbotts Kensington, delineating its Ecclesiastical & Parochial Divisions. 1879. This Map was made to the Order of the Vestry by their Obedient Servant Ed. Daw.

The plan stretches from north to south from Kensal Green Cemetery, to the Fulham Road, and west to east from the Royal Crescent on Holland Park Avenue to Sloane Street. The plan includes the areas of Holland Park, Earls Court, and the Brompton Oratory. Ecclesiastical and ward divisions are marked and coloured. The map is drawn on a scale of of eleven inches to one statute mile.

The plan shows the westward expansion of Victorian London in great detail. Between 1850 and 1880 Kensington was to undergo a complete transformation, from a rural landscape to an urban one. Estate development played an important role, which led to a greater architectural harmony as landowners frequently used the same architects and builders. They also co-operated in improving communications, in particular the laying out of roads. South Kensington, despite the speed of construction, was a high-class residential area composed mainly of large terraced houses of the ​‘premier type’. In North Kensington large terraced houses, garden squares and fine villas were built, especially in Notting Hill. Smaller speculative projects were the norm in Chelsea. In southern Kensington alone 1600 houses were built in 10 years. By the time of the present plan’s publication the Borough accounted for ten percent of all buildings erected in London.

This edition has the dedication to Archdeacon John Sinclair (1797–1875) omitted, with a dedication to the Kensington Vestry inserted., which was responsible for municipal administration. To the upper left is pinned two manuscript leaves, listing roads belonging particular parishes. To the verso of the map are the signatures of five of the chief surveyors of Kensington, ranging from 1880 to 1896. On the plan are numerous manuscript annotations, with roads colour coded, and new roads added.