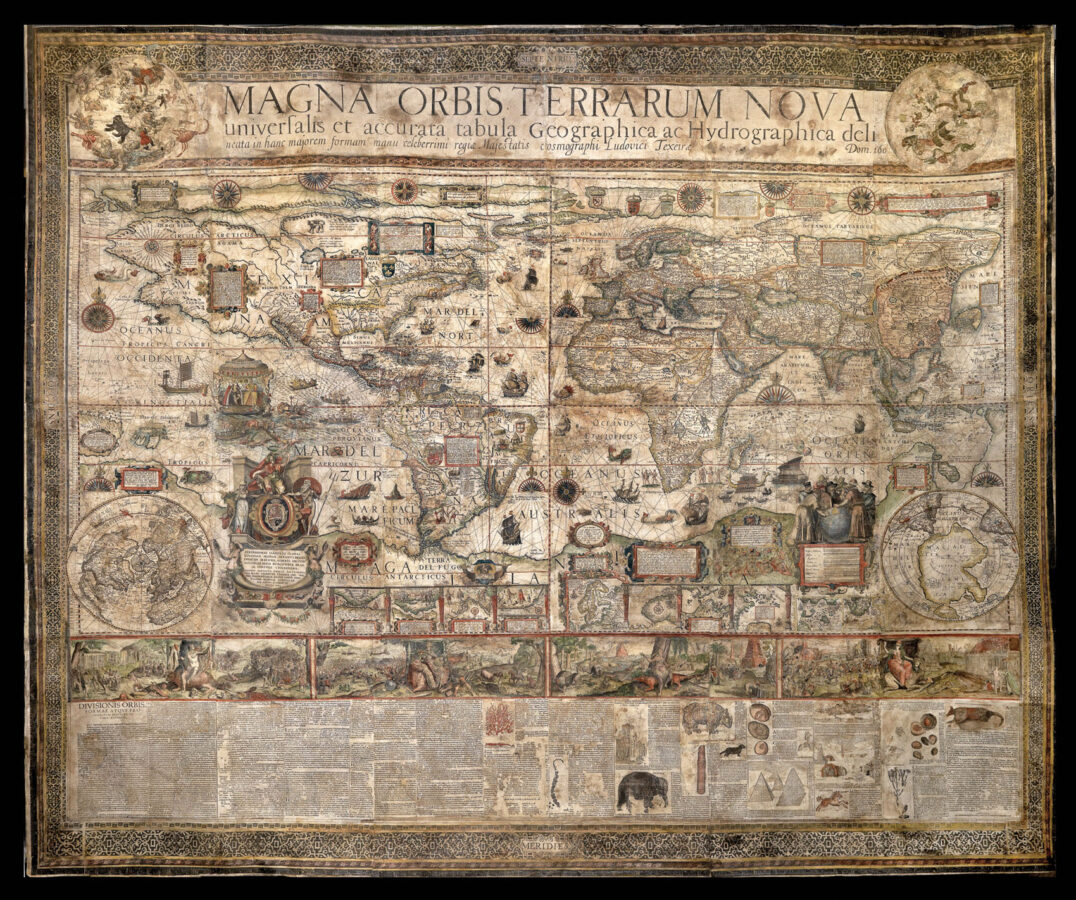 A spectacular wall map of astonishing beauty made at the beginning of the Dutch Golden Age. The only surviving complete example.

The present map draws on the cartography of Luis Teixeira (fl.1564–1613), whose name appears in the large pasted title, a Portuguese cartographer from a famous mapmaking dynasty. He worked in Lisbon and the Portuguese colonies, but was also a friend of, and collaborator with, contemporary Dutch cartographers, contributing a map of Japan to Abraham Ortelius’ great atlas ​‘Theatrum Orbis Terrarum’. Ortelius and Cornelis Claesz published five of his maps between them, and all were specifically advertised using his name, indicating that he was highly respected in Amsterdam.
The map is based upon a simple cylindrical projection and follows very closely the 1592 wall map drawn by Petrus Plancius, ​“a milestone in the emergence of Dutch cartography [and] the first large wall map of the world to be published in the north” (Schilder). That work was engraved by Baptista and Jan van Doetecum and is known only in a single extant example: that in the Real Colegio Seminario del Corpus Cristi in Valencia, Spain. Plancius drew heavily on Gerard Mercator’s 1569 world map, as well as contemporary manuscript maps by the Portuguese cartographers Pedro de Lemos and Bartolomeo de Lasso. The present map, however, shows a number of significant improvements over Plancius’ prototype: the redrawing of Guiana following Sir Walter Raleigh’s exploration of 1595; the insertion of the Davis Strait, Novaya Zemblya, and the tributaries of the Congo; and amendments to the southern parts of Africa and South America. This updated geographical information was drawn not only from Teixeira’s own work, but also from accounts of voyages collected by Jan van Linschoten, Theodor de Bry, Levinus Hulsius, Claesz and others.

The map is noteworthy for its portrayal of a vast southern continent, and its depiction of the Southern Pacific at the dawn of Dutch exploration of Southeast Asia and Australasia. The true form of the island of New Guinea had not yet been ascertained, and so, bizarrely, it appears twice: once as an island on the left-hand side of the map, and again as part of the mythical continent of Magellanica on the right. The Gulf of Carpentaria is tantalizingly hinted at in the sweeping bay in Magellanica at the far right of the map.

The myth of the Great Southern Continent was propagated by the belief that, in order to balance the earth, there must be a landmass in the southern hemisphere of a size commensurate with that in the north. It was, in part, this erroneous assumption that spurred Dutch exploration of Australia in the seventeenth century, and later Captain Cook’s voyages. It was not until the twentieth century, and the explorations of Captain Scott and Roald Amundsen, that the lands of the southern hemisphere were finally charted with any degree of accuracy.

Towards the lower corners of the map are representations of the northern and southern hemispheres, and along the bottom of the map are ten small panels containing detailed maps of Magellan’s Strait (according to Drake in 1579, Noort in 1599, and De Weert, also in 1599); of the Rio de la Plata; Northern Europe; Novaya Zemlya (according to Barentsz in 1598), and the straits of Sona (off Java); Anian; Manilla; and Gibraltar. Below the map, printed on separate strips, are long engraved panels showing the four continents, each personified by a woman riding a symbolic mount. Europe, for example, rides a bull, referring to the myth of Europa after whom the continent is named. Tools representing the arts and sciences lie at her feet, representing Europe’s intellectual supremacy. Behind each woman are animals and people native to each continent. In Europe, Asia and Africa, the Seven Ancient Wonders appear in the background as well. These scenes relate to the text panels beneath the map, which are printed in letterpress interspersed with illustrations including a unicorn (‘monoceros’), a bezoar, and a reduction of Albrecht Dürer’s print of a rhinoceros. The only other known example of this map lacks the text, making the present example a unique survival of the map in its original form. It also bears a dedication to Archduchess Isabella, sovereign of the Spanish Netherlands and daughter of Philip II of Spain.

The existence of an extremely large wall map of the world by Luis Teixeira, sold by Joan Baptista Vrients and Cornelis Claesz, is recorded by Schilder in ​‘Wall Maps of the World published in Amsterdam before 1619’ (MCN, vol. III, p. 39, No. 5), and Shirley in ​‘Mapping the World’ (No. 248). Although neither Schilder nor Shirley record any extant examples, two contemporary sources provide evidence for its production, first in the archives of the publishing house of Plantin-Moretus:

And second in a catalogue by Cornelis Claesz:

​“A much more detailed description of Teixeira’s world maps is provided by Cornelis Claesz in his catalogue of 1609. As was mentioned in the description of map no. 1 [i.e. Plancius’ world map of 1592], this is not a stock list, but a catalogue comprising only of the engravings and maps that were printed from copper plates owned by Cornelis Claesz. In the section ​‘All kinds of large maps’ two maps of the world by Teixeira of different sizes were offered for sale, whilst the customer could choose the language in which he wanted the accompanying description. ​‘Mappa Mundi Lodovici Tessairae, 22. large folios in Latin, Italian, Spanish, French, English, Dutch and German” (Schilder).

Although neither of the sources refers to a date of publication, the Spanish writer León Pinelo referred in 1629 to two Teixeira maps dated 1598 and 1604 respectively. Whether or not they were two unique maps, or simply different editions of the same work, is unclear. As well as bearing the names of Teixeira and Vrients, the present map also carries the name of the engraver Joshua van den Ende. Both Shirley (No. 243) and Schilder (MCN III, p.45 No. 6), record a large wall map on twelve sheets engraved by van den Ende, and dated circa 1604. The sole institutional copy referenced by both Shirley and Schilder (in the Bibliothéque Nationale in Paris) is undated, untitled, and unsigned by any author or publisher. Only van den Ende’s name, as the engraver, appears on the sheets. After consultation of the BNF map, it is clearly printed from the same plates as the present example. The discovery of the present work therefore allows us to confirm Schilder’s date of 1604, and to add both Vrients as vendor and Teixeira as the work’s cartographer. It also allows us to correct the map’s erroneous attribution to Willem Blaeu. The editors of the ​‘History of Cartography’, Destombes (in his monograph on the BNF’s van den Ende map) and Schilder all suggest that Willem Blaeu may have published the map, for three reasons. First, neither Hondius nor Claesz in his 1609 catalogue mention such a map; second, van den Ende is known to have engraved much of Blaeu’s earliest published work; and finally, in 1604 Claesz and Plancius’ privilege for their 1592 wall map ended, thus allowing Blaeu (or any other publisher) to reproduce the map. However, with the discovery of the present work, we can conclude that it was in fact Vrients, in association with Claesz, who decided to publish the new map in 1604, updating the hugely successful Plancius map of 1592 with the latest developments from Teixeira. Vrients’ decision was most likely motivated by the publication of a large wall map by Jodocus Hondius the year before.

Dutch world wall maps from this era are incredibly rare. Due to the rapid rate of discovery at the beginning of the seventeenth century ​“many maps soon lost their value; the owners replacing the obsolete maps with new ones. This development is one of the causes of the great percentage of losses which wall maps of the world suffered; they are extremely rare nowadays” (Schilder).The present work is the only surviving complete example of the Teixeira/​Vrients map of 1604. The example in the BNF lacks the accompanying text and title. Schilder, in his census of Dutch world wall maps published in Amsterdam before 1619 (MCN III, pp. 19–102), records five examples printed prior to the present map. They are as follows:

As the list shows, the present work is only the third surviving example from the first 12 years of world wall map publication in Amsterdam. In fact, of the seven further maps that Schilder goes on to list as published between 1604 and 1619, only four are known to exist in their first edition.