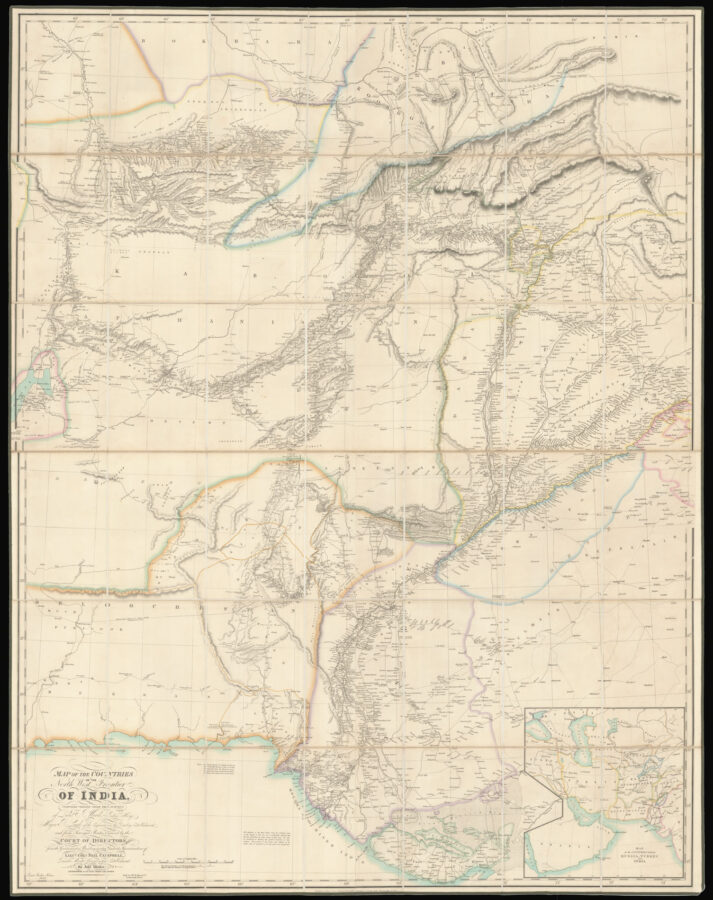 Map of the Countries on the North West Frontier of India

A large scale map of the area beyond India’s northern border, published for the East India House in 1841 by John Walker. The map is the distillation of quite a considerable amount of very ​‘up-to-date’ knowledge of the border countries, provided at least in part by two men with quite different specialities, and was produced at the height of the First Anglo Afghan War (1838–1842). It is copyrighted April 1841, but dated 1842. John Wood (1812–1871) explored the Indus in 1835, and his book ​‘Voyage up the Indus and Source of the River Oxus’ was published by John Murray in 1841… and presumably a considerable inducement to publication of the current map. R. Leech (1813–1845), Engineer, was a linguist: ​‘A grammar of the Panjábee language’, 1838; ​‘Vocabularies of seven languages, spoken in the countries west of the Indus’, 1838; ​‘Grammar of the Pashtoo or Afghanee language’, 1839.

The border of each country is shaded in a different colour. Mountain ranges and major rivers are marked. An inset map at the lower right shows the countries between Russia, Turkey and India. There are additional notes at the bottom of the map.

John Walker (1787–1873) is best known for his work for James Horsburgh and as hydrographer to the East India Company from 1825, a position also held by his father. As geographer, he was a founding member of the Royal Geographic Society in 1830. It was sold by William H. Allen & Co. on Leadenhall Street, London.

This appears to be the earliest issue of the map, which was enlarged to include a ​‘skeleton’ map of Afghanistan in 1850, and then also reissued in 1867. There are no institutional examples of the 1841/1842 issue of the map that we can find.