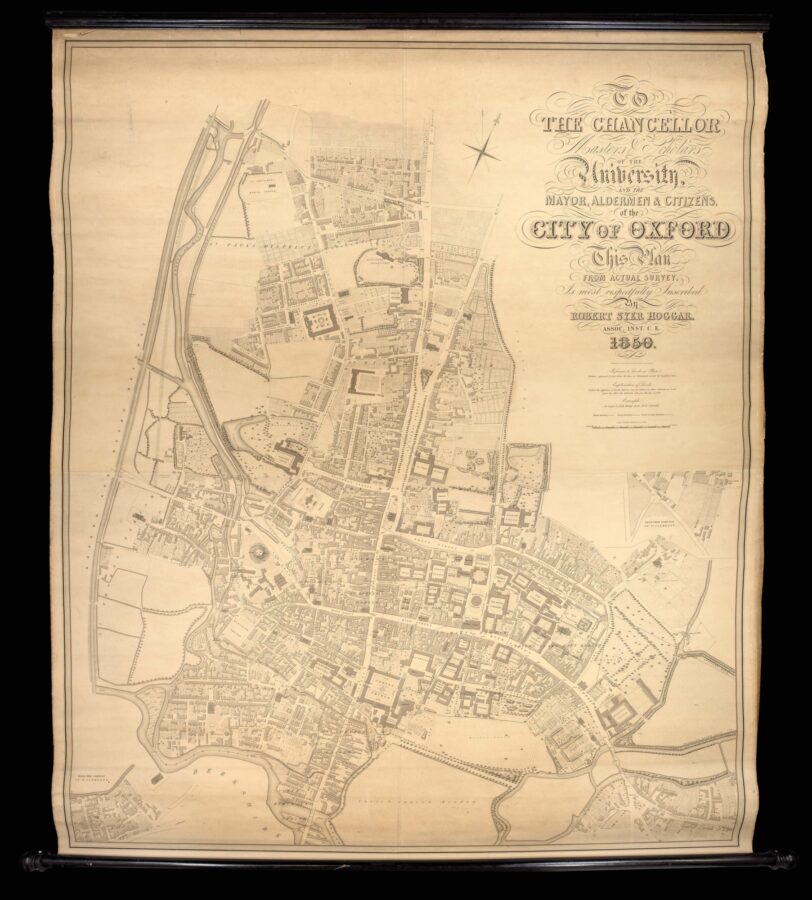 To the Chancellor, Master and Scholars of the University and the Mayor, Aldermen, & Citizens of the city of Oxford, This Plan from Actual Survey is most respectfully inscribed by Robert Syer Hoggar, Assoc. Inst. C.E. 1850

The most important nineteenth-century plan of the city of Oxford, forming a link between the earlier surveys carried out by Isaac Taylor in 1751, (with the later revision by William Faden in 1789), and Richard Davis in 1797 (engraved by John Cary and forming part of Davis’s survey of Oxfordshire) and the large-scale maps and plans of the Ordnance Survey which surveyed Oxfordshire in 1876. Such plans, together with their smaller-scale successors that appeared in countless ​‘Oxford Guide-Books’, have provided the definitive basis for most of the plans, street maps and tourist guides that proliferated throughout the nineteenth century.

It includes the new working-class suburbs of St. Ebbs, St. Thomas’s and Jericho, of which the first two were blighted by the building of the gasworks in 1818 following the passing of an Act in that year which allowed for the manufacture of ​“inflammable air” for heating. For over a century the area suffered from the acrid smell of the gasworks plus the intermittent flooding of the houses, which doubtless contributed to the disease and pestilence so rife in the area. A complete contrast to this and possibly the most interesting part of Hoggar’s survey, was the beginning of the development of North Oxford, the area running from St. Giles Church to Marston Road, Frenchay Road and the Norham Gardens Estate (most of which was owned by St. John’s College) where the period from 1850 to 1910 saw enormous changes to the architectural landscape of the area. It is interesting to note that Woodstock Road and Banbury Road are designated respectively as St. Giles Road West and St. Giles Road East, whilst the area beyond Park End Street is completely undeveloped but indicates an area earmarked for a ​“Proposed Station”.

Like most nineteenth century plans the decoration is limited to a fine calligraphic title-piece enhanced by a ​“Representation and an Explanation of Levels” from which may be deduced the difference in level between any two points on the map. The immense detail includes colleges, halls and houses, bridges, rivers and parks, chapels, churches and burial grounds, hospitals and institutions, the Radcliffe Observatory and the Botanical Gardens. Large-scale city plans of this period were separately published in small numbers and thus have a low survival rate — it is unusual to find one in such fine original condition.