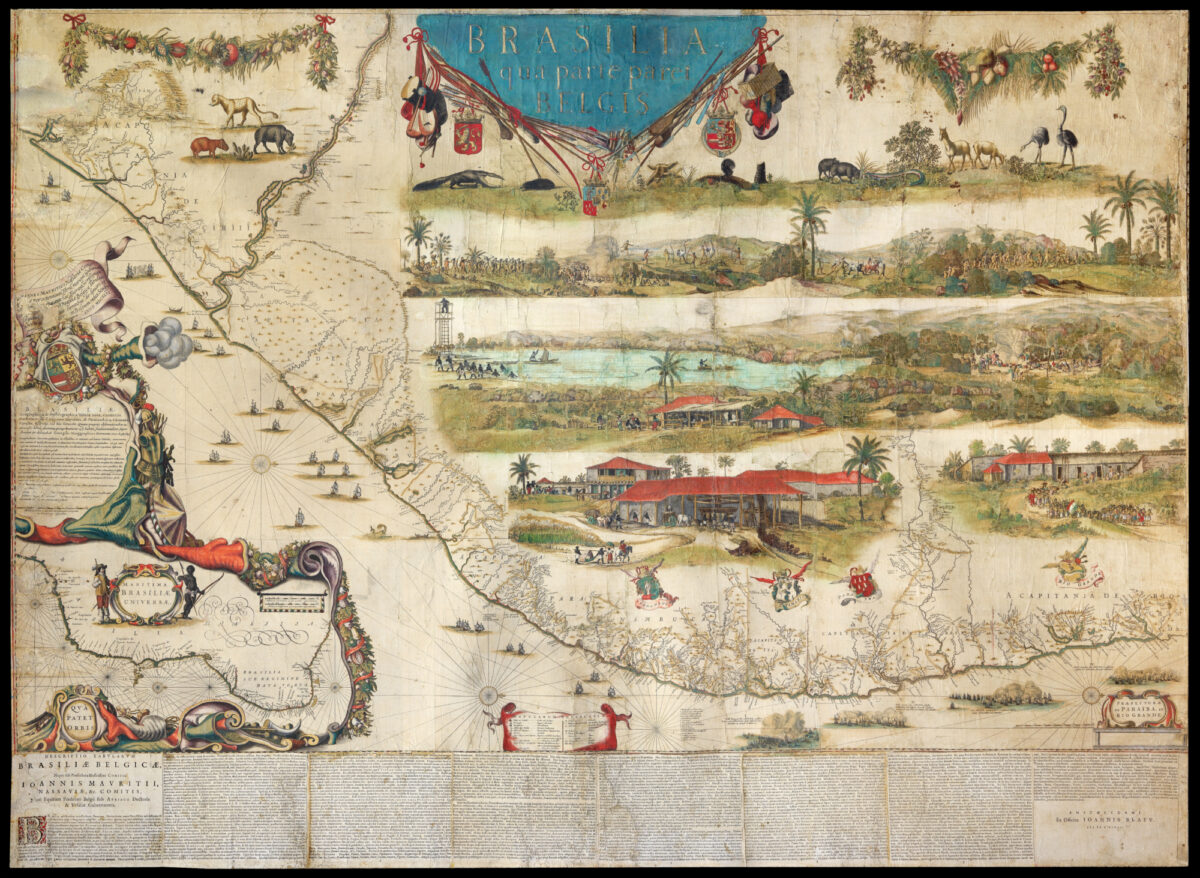 In 1594, Philip II of Spain and Portugal gave Dutch ships sailing permissions for the Portuguese colony of Brazil, with further trade permitted by the Twelve Years’ Truce of 1609. When this treaty came to an end, the Dutch had not only vastly expanded their influence in South America, but also immediately established the Dutch West India Company, which soon began to interfere with many Spanish and Portuguese colonies. Thus the following decades saw several South American possessions change hands multiple times, including Brazil.

In 1624, Dutch forces seized Salvador, then the capital of Brazil, but the city was soon retaken by the Portuguese and from then on served as the base for their resistance against the rival European powers. Five years later the Dutch turned their attentions to the state of Pernambuco, Brazil’s largest and richest sugar-producing region, and successfully gained control with a fleet of 65 WIC ships.

Although Portuguese resistance prevented the immediate establishment of Dutch forts, the new invaders finally gained a hold in the mid-1630s, by which time they controlled the coastline from the Rio Grande do Norte to Cabo de Santo Agostinho, as well as profitable sugar lands and several important towns. The appointment of Johan Maurits van Nassau-Siegen as governor of the new colony in 1637, Dutch influence expanded greatly, so that by the early 1640s Dutch Brazil encompassed the north-eastern coastline between the Amazon and Sao Francisco Rivers.

Under Maurits, Dutch Brazil thrived both economically and socially. The freedom of worship, security of property, representative government and extensive modernizations he implemented attracted more settlers than the Portuguese colonies. He also took an active role in the exploration and chronicling of the land, inviting scientists, artists, historians and cartographers from Europe to cross the Atlantic and study the territory. Among these was a German cartographer, naturalist and astronomer named Georg Margraff, who undertook the first zoological, botanical and astronomical expedition to Brazil, beginning in 1638.

Although he was to die six years later, possibly from a disease contracted in Guinea, Margraff produced two seminal works during his years in Brazil. The Historia Naturalis Brasiliae, co-authored by his fellow scientist Willem Piso, which detailed the flora and fauna of Brazil, won a lasting place in the history of science canon, while his large map, published posthumously in 1647, was among the most precise and thorough maps of a South American colony produced during the sixteenth and seventeenth centuries.

Interestingly, another Dutch cartographer named Cornelis Golijath was also at work on a map of Dutch Brazil at the same time. The Golijath map, however, was never published, and the two existing manuscripts indicate that, while it contained more toponyms, it was inferior both in cartographic indications and beauty. It is not clear why the two cartographers, who would certainly have been aware of each other’s projects, did not pool information.

Margraff’s extensive reports on the Brazilian interior, as well as a manuscript map, had travelled back to the Netherlands in 1642, where they reached the Amsterdam workshop of leading Dutch cartographer Joan Blaeu. Blaeu had recently replaced Claes Jansz. Visscher as the West India Company’s preferred cartographer, and was thus privileged with the most up-to-date material from the Company’s research projects. He transformed Margraff’s information and illustrations into a magnificent map of Dutch Brazil, published both as a large wall map entitled Brasilia que parte paret Belgis, and also in Caspar Barlaeus’s Rerum per octennium.

The map extends from the Rio Grande in the north, shown on the right-hand side, to the Cabo de Santo Agostinho in the Pernambuco region to the south, here on the left. Numerous rivers, forts, towns and churches known to, and often controlled by, the WIC are shown; the symbols used to represent them are explained in a key beneath the main image. The vast majority of geographical and topographical details are concentrated on and around the coastline, where Dutch influence was strongest, the exception, shown towards the right-hand side, being in the Paraíba river valley, where the extensive exploration into the sertão, the Brazilian back-country largely unknown by the Europeans, is illustrated. This information resulted from the expeditions Elias Herckmans, the Captain of Paraíba, who authored a hugely detailed ethnographic, economic and geographical report on the region.

Other information about the sertão is conveyed by the wonderful illustrations that adorn the right-hand side of the map, executed by Frans Post, another artist tempted to Brazil by Maurits. One of these vignettes shows a Dutch officer leading a group of ​‘Brasilianen’ soldiers on an exploratory mission. The native Brasilianen were essential allies to the WIC, who therefore presented them with prized gifts of linen, a valuable fabric which they are shown wearing in these images. The natives are also shown in a variety of pursuits, including hunting huge birds with bow and arrow, crossing rivers in wooden canoes, and proudly waving the Dutch flag.

The animals of Brazil are also illustrated on the map, including sloths, boars, snakes and a number of unidentifiable creatures. Further decorative features include ships all along the coastal waters, several vignettes of sea battles, floral garlands along the upper edge, the colonial coat-of-arms of each region, and an elaborate cartouche combining natural and military imagery, within which the long title is housed. Beneath this an inset map shows a smaller-scale representation of the extended Brazilian coastline, entitled Maritima Brasiliae Universae, with towns, cities and harbours labelled.

Along the lower edge of the map, eight panels provide an extensive description of Dutch Brazil in Latin. Beginning with its basic geographical location, the note includes information about its inhabitants and their customs, including a list of its different tribes and tongues, the natural resources and foods found there, with a particular emphasis on the sugar industry, and finally about the European explorers and powers with significant history there.

In 1652, just five years Blaeu published Margraff’s map, the Portuguese embarked upon a determined re-conquest of Brazil, with the result that the Dutch finally withdrew in 1654 after two years of fighting. Thus their short-lived occupation was brought to an end: although the existence of Dutch Brazil spanned little more than two decades, it remains an important period in the country’s history, largely thanks to Maurits’ efforts. News editions of the map, on new plates and with additions, were later published by van den Hoeye in 1652, Huych Allard in 1659, and by Clement de Jonghe in 1666, although even by the time the first of these appeared the cartography was already outdated.

Extremely rare. We are only able to trace three institutional examples: The British Library; Staatsbibliothek, Berlin; and the Rostock University Library. All three of which are preserved in monumental atlases, which contain other seventeenth century Dutch wall maps. Peter Whitehead in his article on the map, records an example, in the form of a wall map (with text to the side and below the map) being offered by the Utrecht bookseller R. C. Braeken in 1983. Thus the present map would represent a fifth example, and only the second work to appear on the market since the Second World War.