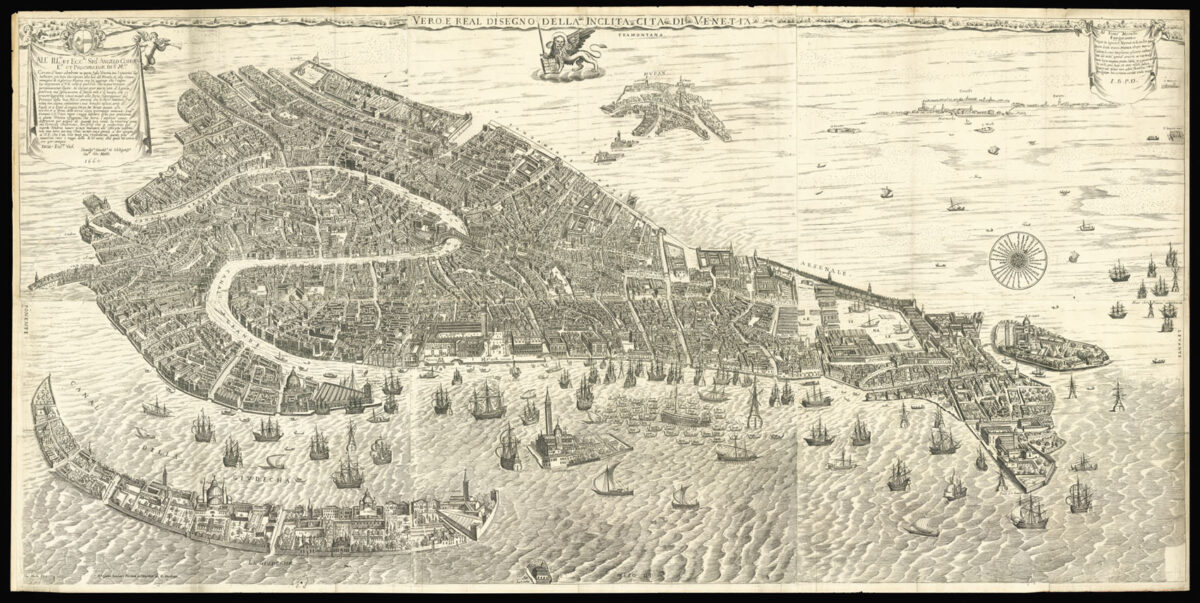 The Marriage of the Sea

By SCOLARI, Stefano and Giovanni MERLO, 1660

A large and impressive plan of Venice.

This plan of Venice on six sheets renders the city and the surrounding islands in great detail. In its size and grandeur it is reminiscent of Jacopo de Barbari’s great plan of 1500. All major public buildings and churches are named. Gondolas can be seen on the Grand Canal, with a great flotilla of boats to the south. At the flotilla’s centre is the ​“Bucintoro” (Bucentaur), the Doge’s grand barge. The boats signify Venice’s most important festival: the ​“Sposalizio del Mare” (Marriage of the Sea), which took place every year on Ascension Day. After a procession of boats sailed out from San Marco into the lagoon, led by the Bucentaur, the Doge would drop a consecrated ring into the water, a ceremony that symbolically wedded Venice to the sea for the coming year. The ceremony still takes place, although it is now conducted by the mayor of the city. The lion of St Mark stands above the plan, the symbol of the Venetian republic. To the upper left is an extensive dedication within a decorative drape, surrounded by cherubs. It bears the Correr coat-of-arms, a distinguished family of Venetian nobility. Angelo Correr (1326–1417) was Pope Gregory XII, and later, the great collector Teodoro Correr (1750–1830) would donate his collection to the city, with the works forming the core of the now famous Correr Museum. To the upper right is an epigram by Joanne Merula.

Stefano Scolari (fl.1643–1695) was an engraver and publisher working in Venice during the second half of the seventeenth century.