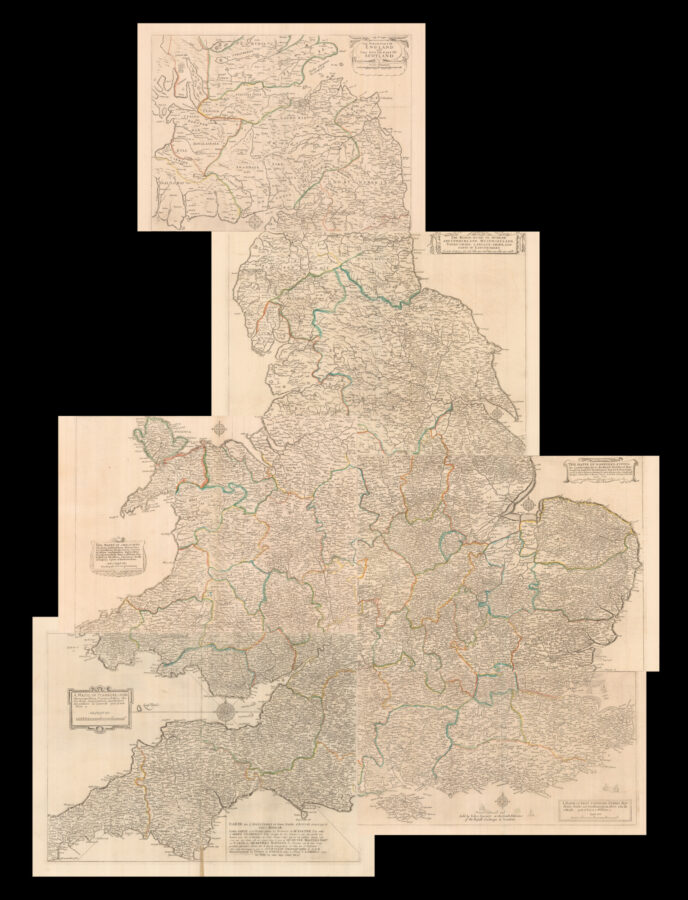 A fine example of John Rocque’s edition of ​“The Quartermaster’s map”, published some 108 years after Thomas Jenner’s original edition.

The succession of states of the Quartermaster’s map is complex and confusing. The map was first issued by Jenner in 1644, and, according to Pennington: ​“there were two states. He re-issued it in 1671. On Jenner’s death his stock passed to John Garrett, who added roads and re-issued it in 1676. Another issue with more (?) roads added was advertised in the Term Catalogues for 1688. The map was again advertised for sale by Garrett in 1718.

The plates apparently passed to John Rocque, who re-issued the map in 1752 with few changes [as here], but with the erroneous statement that it was Oliver Cromwell who inspired the original publication, and with the addition of a French title on sheet 5. In his catalogue of 1788, Robert Sayer asserts ​‘The plates having been un-noticed for several years, by the ignorance of the Proprietor, were procured by Mr J. Rocque… in the year 1752.’ There was another issue after Rocque’s death in 1762, with some re-engraving of the engraved lines and a few more roads added, although Rocque’s title and 1752 imprint were retained. It is Richard Gough who, in vol. 1 of his ​‘British Topography’ of 1780 asserts that the map was ​‘retouched by Jefferys. The plates then passed on to Robert Sayer, for the map is listed in his catalogue of 1788. In 1794 Laurie & Whittle took over Sayer’s stock, and the map appears in their catalogue of 1800. But its usefulness cartographically had vanished, since it is advertised in 1813 as ​“much esteemed by antiquaries“

The last mention of the map is in R.H. Laurie’s catalogue of 1824, after which it was sold for copper, according to a manuscript note in one of the firm’s lists.