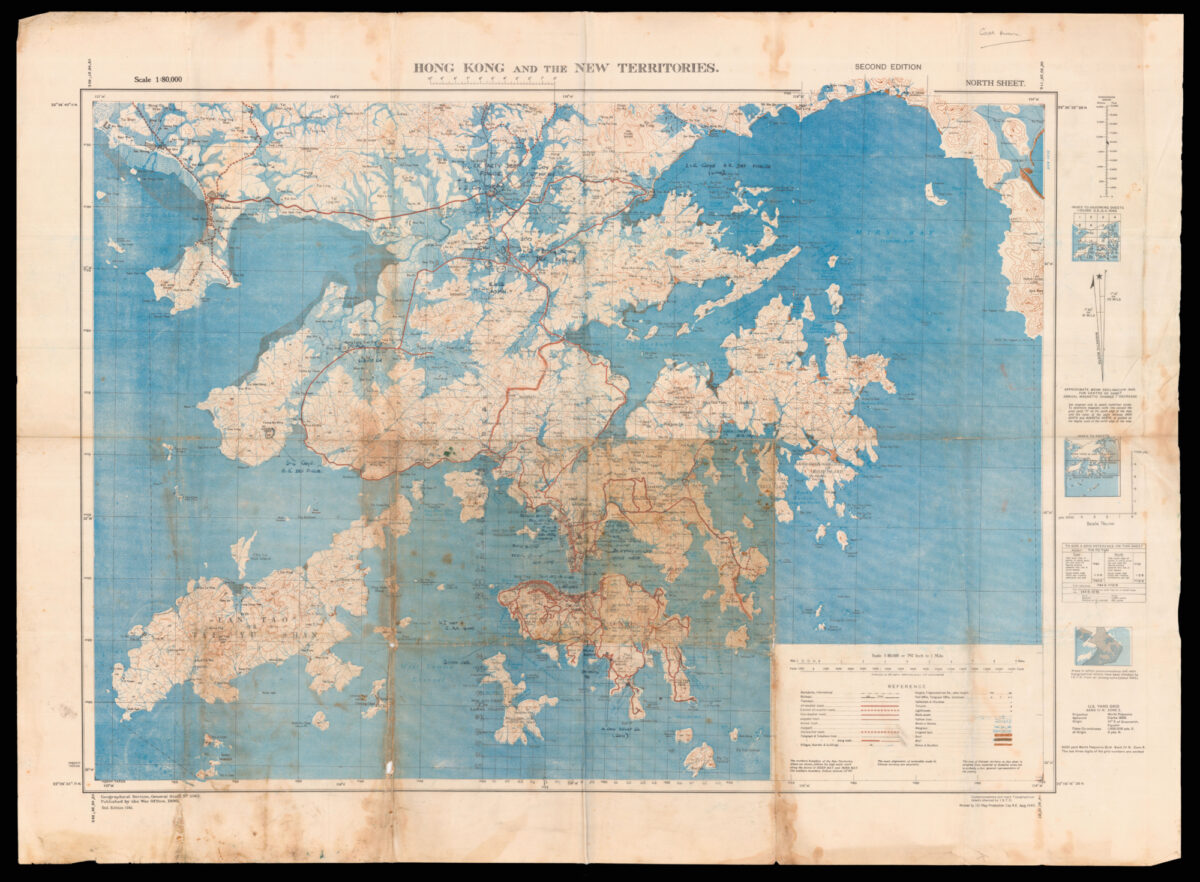 The liberation of Hong Kong from Japanese Occupation

A unique map of Hong Kong and the New Territories, with contemporary manuscript annotations showing the liberation of Hong Kong from Japanese occupation.

This map, which shows Hong Kong, Kowloon and the New Territories, was first published by the British War Office in 1936. The present example, a second edition, was published shortly after the end of the Second World War, when Britain reoccupied the islands following four years of Japanese occupation. Thick red lines across the map indicate the ​“all weather roads” that could be relied upon for travel and communications across the region. Extending from Lantau Island to the west to Mirs Bay in the east, from the Chinese city of Shenzhen in the north to the southern Soko Islands, it is generally considered one of the most detailed maps of Hong Kong made in the early twentieth century.

The present example is made more interesting by the copious manuscript annotations that appear across the centre of the map. A grid has been drawn over Hong Kong in pencil, marking the lines of longitude and latitude more precisely. Discolouration indicates that it this lower central portion that was the primary focus of the map during its use. Annotations in pen identify features, such as ​“Dockyard Stores”, ​“Canal” and ​“Coal Dump”, and military information, including ​“Off[ice]rs Mess” and ​“2 AA Guns”. There are also numerous annotations listing the number of Japanese soldiers, in Victoria these include ​“3000 Japs”, together with a further 200 with horses, and the Japanese Officer’s Mess. Japanese troop numbers are noted on Kowloon totalling just under 2000 men. More annotations can be seen further north near modern day Shenzhen, marking the location of the Head Quarters for both the Hong Kong Artillery Force, and the Defence Force, as well as military companies and infantry divisions. A note in the upper right margin identifies it as the hand of ​“Capt Owen[s]”, an officer in the British Task Force that landed in Hong Kong on 30th August 1945, to take back control of the territory from the Japanese.

Established in 1857, the British War Office was the governmental department responsible for the administration of the British Army until 1964, when its functions were transferred to the Ministry of Defense. During this time it produced many maps, with the number of publications increasing rapidly during years of conflict.