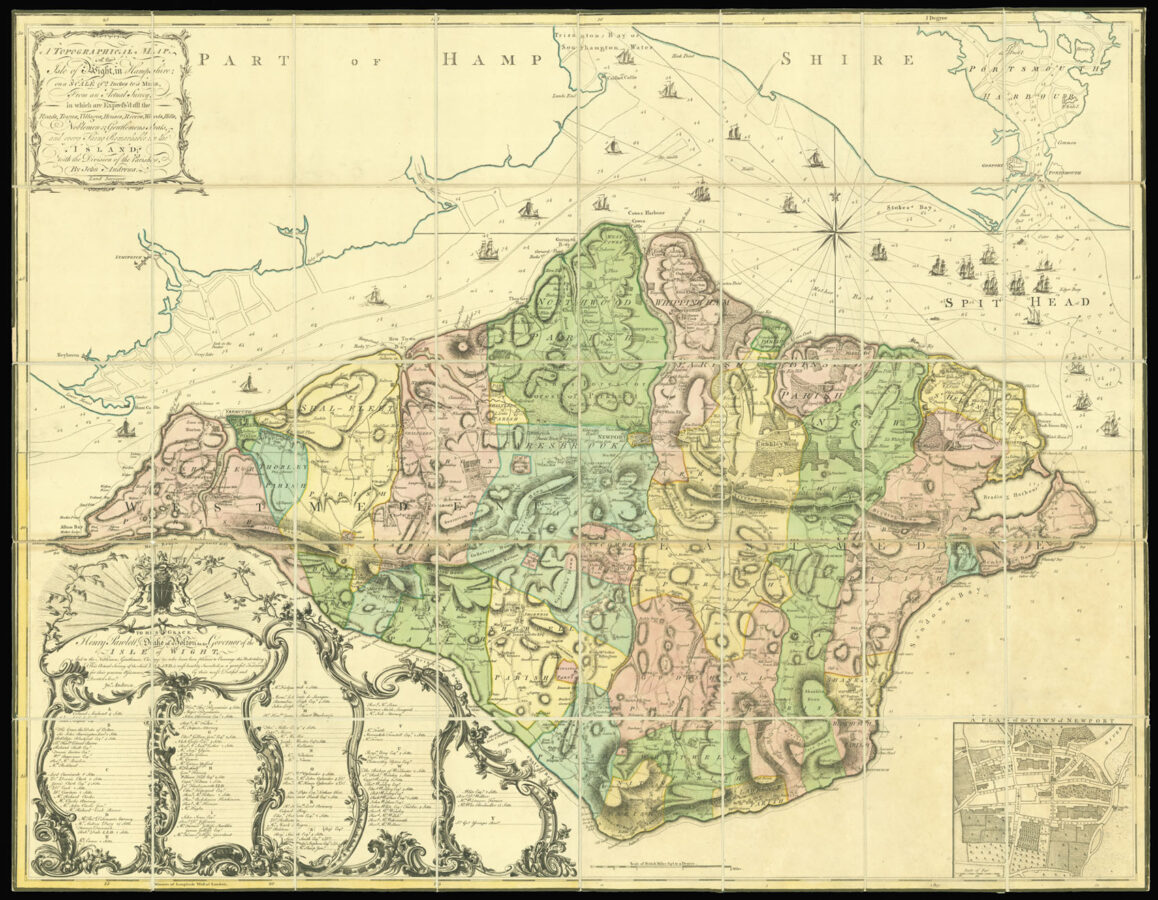 The largest map of the Isle of Wight ever published, in full wash colour

Topographical Map of the Isle of Wight in Hampshire on a Scale of 2 Inches to the Mile, from an Actual Survey in which are express’d all the Roads, Towns, Villages, Houses, Rivers, Woods, Hills, Noblemens, & Gentlemens Seats, and every Thing Remarkable in the Island; with the division of the Parishes by John Andrews. Land Surveyor. To His Grace Henry Panlett, Duke of Bolton, &c. &c., Governor of the Isle of Wight, And to the Noblemen, Gentlemen, Clergy &c., who have been pleased to Encourage this undertaking. This Actual Survey of the Said Island, is most humbly inscribed, as a grateful Testimony for their generous Assistance by their most Dutiful and Devoted Servt. Jn. Andrews.

John Andrews together with Andrew Dury were responsible for three of the major eighteenth century county surveys: Hertfordshire 1766, Kent 1769, and Wiltshire 1773. To this must be added the present map of the Isles of Wight — as it was surveyed upon the same scale of two inches to the mile. The map itself bears stylistic similarities to the work of John Rocque, with the hills shown in caterpillar fashion and the fields differentiating between meadow and arable. Most large-scale maps were on a scale of one inch to one mile — the larger scale allowed for the use of far greater detail especially in the road system, which includes even the narrowest of lanes, and in the delineation of towns, villages and parishes. Also shown are hills, heaths, woods, parks, and commons, rivers, water-mills, marshes and ponds, and kitchen gardens. To the sea are numerous sailing ships, with soundings marked. The publisher’s imprint bears the name Andrew Dury, and Mary Anne Rocque — the widow of John Rocque — whose pictorial style so influenced John Andrews.

To the lower left is a dedication to Henry Powlett, 6th Duke of Bolton, who was at the time Vice-Admiral of Dorset and Hampshire. Below the dedication is an alphabetical list of 105 subscribers, and to the lower right a plan of Newport on a scale of approx. 400 ft to the inch.

The present map is a superb example of the first edition with the imprint of Mary Anne Rocque, and dated 1769. The second edition bears the date 1775, and text below the title reads: ​“N.B. This Second Edition has been corrected with several improvements”.

Rare we are only able to trace two institutional examples of the first edition: the Bibliotheque National de France; Cambridge University Library.