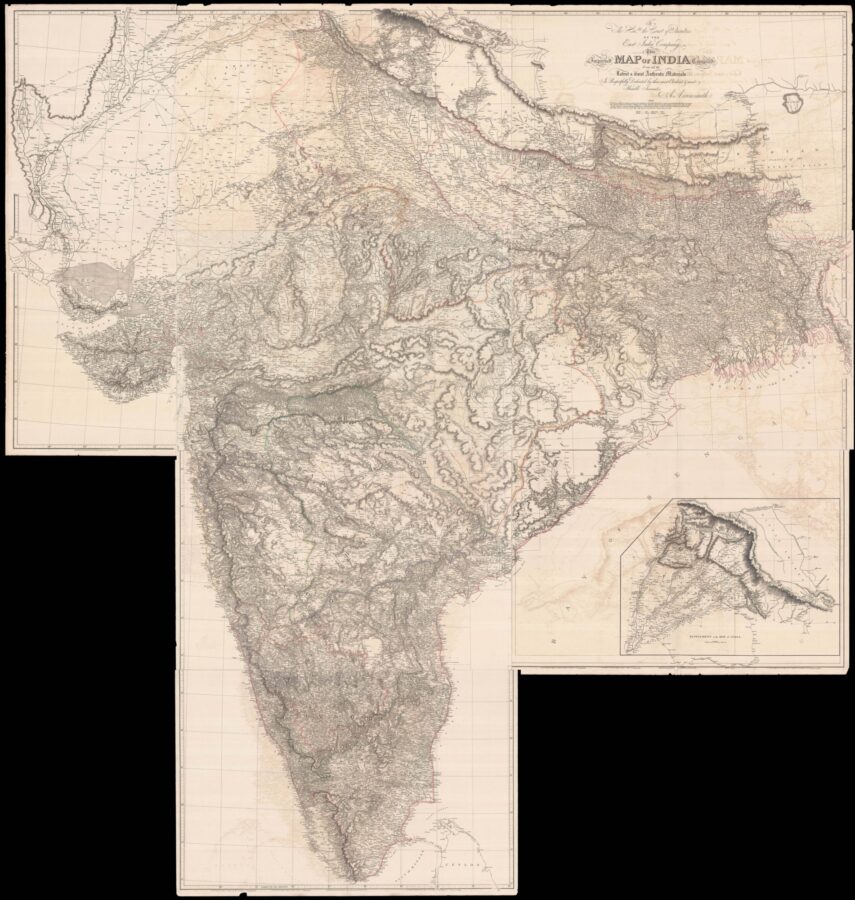 The largest map of India produced before the trigonometrical survey

To The Hon[oura]ble the Court Directors of the East India Company This Improved Map of India Compiled from all the Latest & most Authentic Materials Is Respectfully Dedicated by their most Obedient & most Humble Servant A. Arrowsmith.

Arrowsmith’s monumental wall map of India on nine sheets.
With the growing influence of the British in India at the end of the eighteenth century, the need for an up-to-date general map of the sub-continent grew. The first Governor-General, Warren Hastings, employed Major Rennell who, in 1779, published his famous Bengal Atlas, followed up in 1788 by his map of India. The map itself was based upon D’Anville’s map of 1752, though enriched by much new material, supplied by the numerous ​“route surveys” carried out by the army.
As these ​“route surveys” began to become more numerous and accurate the need for a new general map of India soon became apparent. In 1816 Aaron Arrowsmith published his ​‘Map of India’ in nine sheets, on a scale of sixteen miles to an inch, which was the last great general map based on route surveys. His subsequent Atlas of South India, published in 1822, was based upon the trigonometrical surveys of Colonel Lambton, filled in by the officers of the Madras Institute.
Of Aaron Arrowsmith’s (1750–1823) formative years and training virtually nothing is known; he was in London in 1777 when he witnessed the will of Andrew Dury, a mapseller and publisher, and was probably training with him; he may have trained with William Faden, Geographer to the King, but was certainly employed by John Cary in 1782, as he is credited with the survey work for ​‘Cary’s Actual Survey, of the Great Post Roads between London and Falmouth’, published in 1784; he is frequently credited with some of the survey work for Cary’s county atlas, ​‘Cary’s New and Correct English Atlas: being a set of county maps from actual surveys’ (1787), but the sources are silent on this and by this time Arrowsmith had established his own business.
Arrowsmith was to establish himself as ​“easily the foremost cartographer of his time” (R.V. Tooley), specialising in large-scale or multi-sheet maps; his first independent publication was his ​‘Chart of the World on Mercator’s Projection exhibiting all the New Discoveries to the present time: with the tracks of the most distinguished Navigators since the year 1700’, on eleven sheets, published in 1790. He followed this with his ​‘Map of the World on a Globular Projection, exhibiting particularly the Nautical Researches of Capn James Cook, F.R.S.’, published in 1794, with an accompanying memoir, the ​‘Companion to a Map of the World’, which explained his editorial practices.
These maps set a new standard; Arrowsmith was assiduous in analysing and verifying his sources, discarding not only the fictional but also the uncertain, going to printed and manuscript sources for his information, and engraved in a clear and highly legible style. Arrowsmith was also diligent in revising and improving his maps to keep them current, and served as an inspiration for the next generation of (particularly American) surveyors. 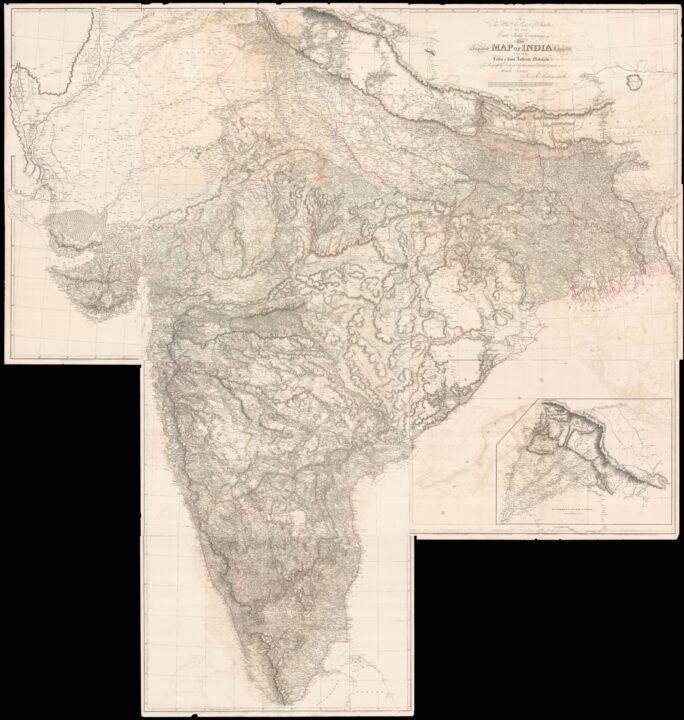