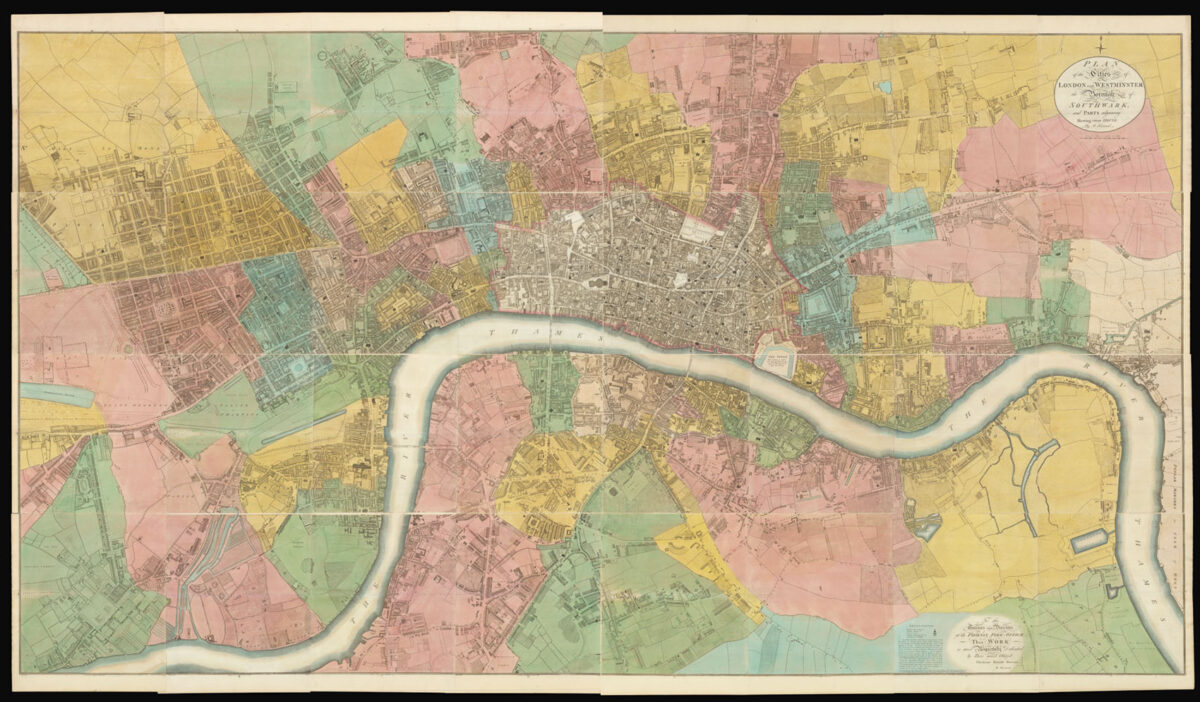 Plan of the Cities of London and Westminster The Borough of Southwark and Parts Adjoining, Shewing Every House.

Horwood’s map was produced for use by the Phoenix Fire Office and is dedicated to the Trustees and Directors. It was the largest map ever printed in Britain at the time, and the first attempt to produce a map of London with all of the houses delineated and numbered, an invaluable aid for the insurance office and very useful in identifying the street numbering of eighteenth-century London. The numbering of buildings did not begin until about 1735, when the practice of identifying a building by describing it as ​‘by’, ​‘opposite’ or ​‘over against’ some other building was recognized as confusing and erroneous. However, even by the date of printing of Horwood’s map, it was still not universal.

The map is produced to exactly the same scale as the Rocque map of fifty years before and so enables us to compare the development of London on a street-by-street basis in the second half of the eighteenth century. It is also fascinating to look at the fringes of London and see the areas which were soon to be swallowed up. Thomas Lord’s cricket ground is shown in its original place, in what is now Dorset Square. It was opened there in 1787 (7 years before the relevant sheet on the map was published). The pressure of London’s development led to a rent increase in 1809 which resulted in Lord moving his cricket ground to the greener pastures of St. John’s Wood.

Very little is known about Horwood (1758–1803). Most likely he was working for the Phoenix Assurance Company on surveying jobs when he began the enormous task of surveying the whole of the built-up area of London. ​“According to his own account the prepration of the plan gave him nine years’ severe labour and he himself ​“took every angle, measured almost every line, and after that plotted and compared the whole work”. He sent a small sample of the plan showing Leicester Square and its neighborhood to all the London vestries with a letter promising that those ​“who gave him Encouragement” could have a ​“compleat” copy by ​“the year 1792”. His estimate proved to be over-optimistic and only one sheet — B2 (Grosvenor Square-Piccadilly) — was published by 1792 (Howgego, p. 22). In January 1798 he wrote to the Phoenix Assurance Company offering to dedicate his map to the company if the directors would make him a loan of £500 to enable him to finish the work. His request was granted but this, in addition to an award from the Society of Arts, were too little and too late and, in 1803, Richard Horwood died in Liverpool in poverty and obscurity, so sharing the fate of other great men like John Stow and Wenceslaus Hollar, to whom London had failed to honour her debt of gratitude.

Richard Horwood is a little-known but highly important English surveyor. He emerges in about 1790, in the employment of the Phoenix Assurance Company, when he published proposals for a plan of London: 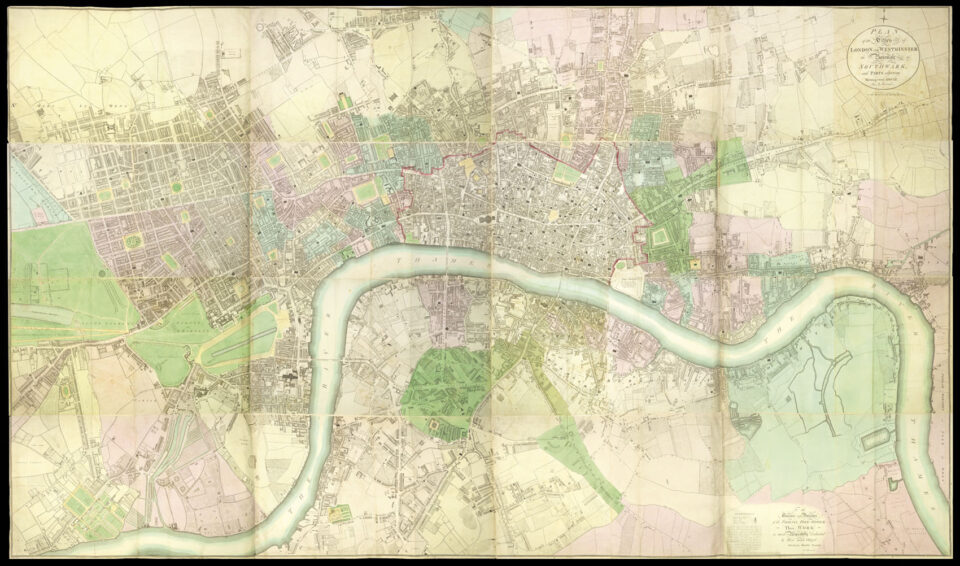 Richard Horwood 1799.
Plan of the Cities of London and Westminster The Borough of Southwark and Parts Adjoining, Shewing Every House.