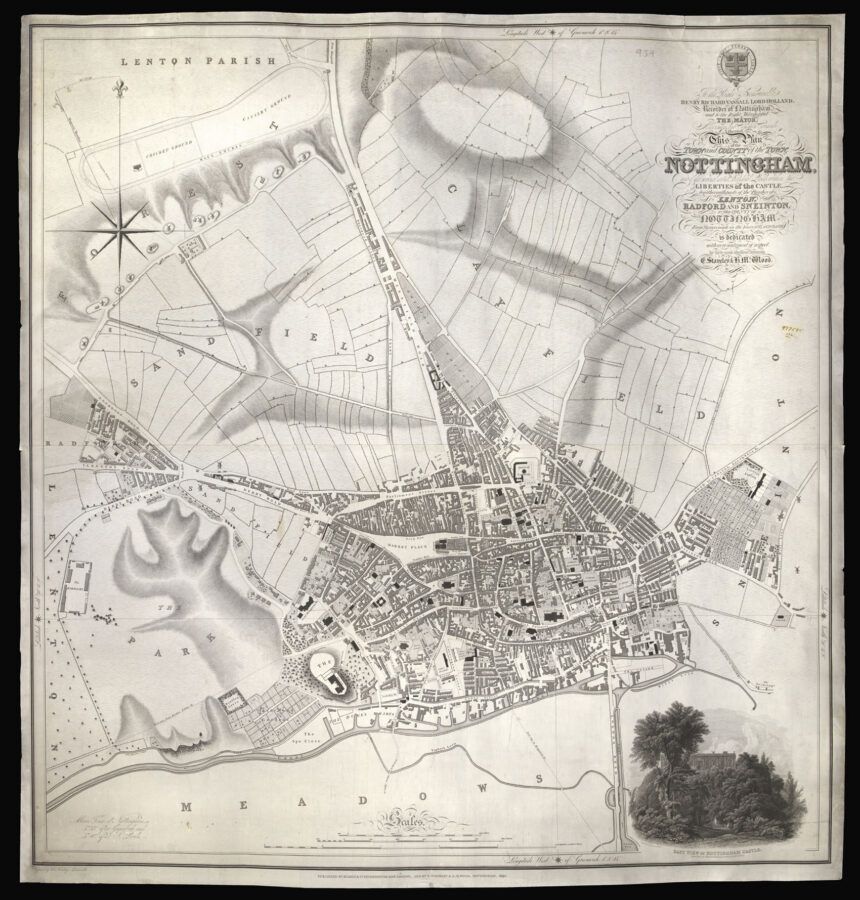 The largest and most detailed plan of Nottingham published to date

To the Right Honourable Henry Richard Vassall Lord Holland, Recorder of Nottingham, and to the Right Worshipful The Mayor, Aldermen, and Common Council there of, This Plan of the Town and County of the Town of Nottingham and of the several extra Parochial Places within the Liberties of the Castle together with parts of the parishes of Lenton, Radford and Sneinton, in the County of Nottingham. From surveys made in the years 1827, 1828, & 1829. Is dedicated with every sentiment of respect by their most obedient servants E. Stanley & H.M. Wood.

A highly detailed town plan of Nottingham. Nottingham was a flourishing city in the mid-nineteenth century, bolstered by the Industrial Revolution. The first lace machines had been brought to the city in 1809, and it was soon the centre of British lace manufacturing. Unfortunately, the rapid expansion of population (it had increased from 28,801 in 1801, to 50,220 by 1831) required to support this industrial expansion created huge swathes of slums, known as the worst in the British Empire. After the local landowner, the Duke of Newcastle, refused to endorse the Reform Act in 1831, inhabitants of these slums rioted and burned Nottingham Castle; the castle would not be restored until 1875.

Edward Staveley architect and mapmaker (1768–1837) was appointed survey to the Nottingham Corporation in 1796; Staveley’s appointment would be the starting point for the formal architecture and panning of the city. Although responsible for several buildings in Nottingham, only the Baptist Chapel, on George Street (1815), now the ​‘Arts Theatre’ and the Plumptre Hospital, Plumptre Square, survive. He is best known along his fellow architect Henry Moses Wood (1788–1867) for their great survey of the city, the present plan.