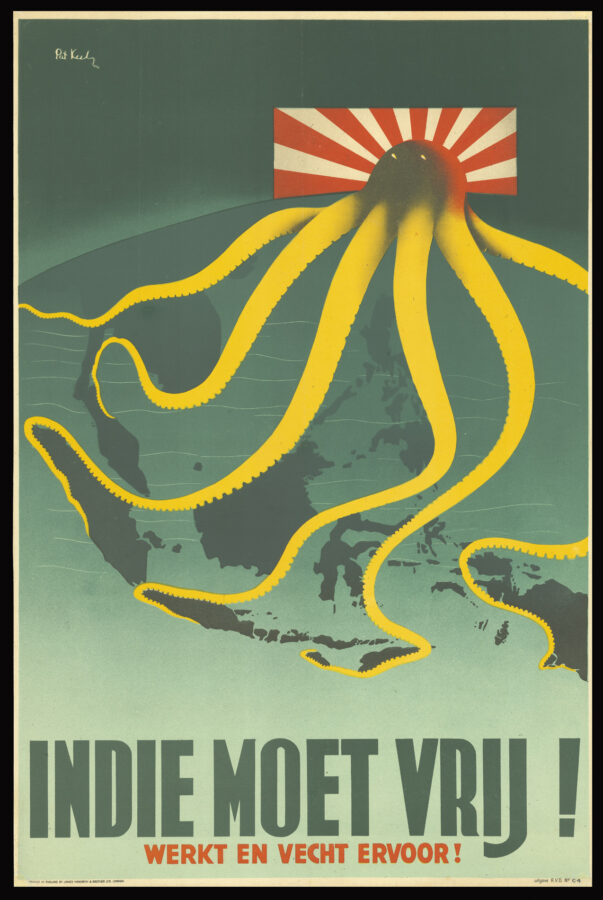 The Indies Shall Be Freed!

Indie Moet Vrij! [The Indies Shall Be Freed!]

The Dutch title to this war-time poster reads ​‘Indie Moet Vrij!’ (The Indies Shall be Freed!). The poster, published in London towards the end of the Second World War was evidently aimed at the Free Dutch troops still station in Britain at the time, the Dutch East Indies having fallen under control of the Japanese Imperial Army. The theatre had been somewhat by-passed by the Allied powers who had decided not to occupy Sumatra but focus their efforts on Japan itself. In this light the post may be seen as a sop to the Dutch who may well have felt that their colonies had been ignored by their allies.

Maps depicting Octopi have a long a distinguished history. The Octopus was most famously used by Fred Rose, who in 1870 depicted Russia as a malignant Octopus, its malignant tentacles spreading across the map. The device would be used by the Japanese during the Russo-Japanese War of 1904-05, and again by the Vichy government to caricature Winston Churchill. In the present poster Keely uses the Japanese Imperial flag to frame the octopus’s dark and menacing head, with its lithe yellow tentacles ensnare all of Southeast Asia.

Patrick Cockayne Keely (?-1970) was a designer of posters, press advertisements and trade matter, producing work for London Transport, Southern Railway and the Post Office before the Second World War. During the war, Keely produced posters for Ministry of Information targeting the Ministry of Labour and National Service campaigns including accident prevention. His work at the time was notable for its use of few objects or symbols together with rich colours making a bold visual message. This, allied with his design style to deliver the message in shorthand, ensured it was comprehensible to everybody and resulted in some of the most striking wartime posters.