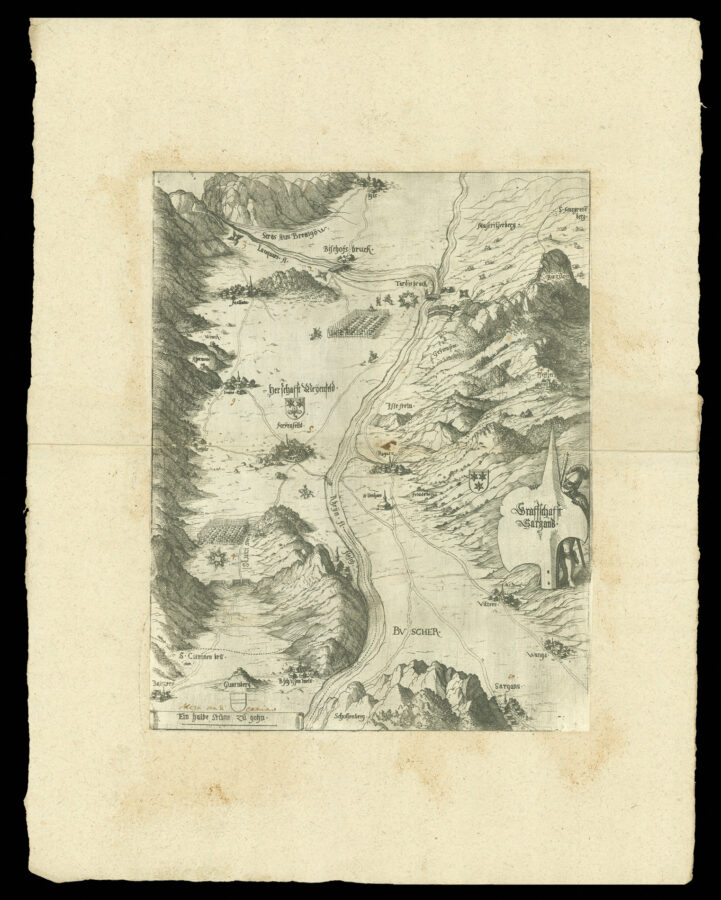 The home of Heidi

Probably by Conrad Gyger. Arthur Dürst notes four separate editions of this map over the 1630s. The present example is the second edition: unsigned, and containing a title in the pikehead-shaped cartouche that is missing from the first. It is distinguished from the third edition, produced by Matthias Merian, by the fact that the town of Jenins has retained its correct name, rather than being incorrectly amended to Sems.

The map depicts the region of Sarganserland, or Grafschaft Sargans, in the canton of St. Gallen in Switzerland. Grafschaft is roughly equivalent to the term county, denoting the territory of a Graf, or count; a Herrschaft was the fiefdom of a lord. The map is orientated with south at the top; it covers the region from Sargans in the north (on the bottom border) to ​‘Tardisbruck’ (possibly modern Landquart?) and Igis, with the country on either side, with the Rhine running centrally through the map. Vilters and Wangs (now the jointly named Vilters-Wangs) are villages in the Wahlkreis region of Sarganserland. Maienfeld, marked as Herrschaft Meyenfeld, would later be the setting for the popular children’s book ​‘Heidi’. The central valley depicted was of great strategic importance as a main route through the Alps southwards from Zurich and also from Austria.

A later derivative of this map is to be found in Cornelis Danckerts I’s ​“Historis oft waerachtich verhael van den gantschen toestant van oorlooge soo die ghevoert is in Duitschlandt” (Amsterdam, 1642), while the BL has a very similar German version.