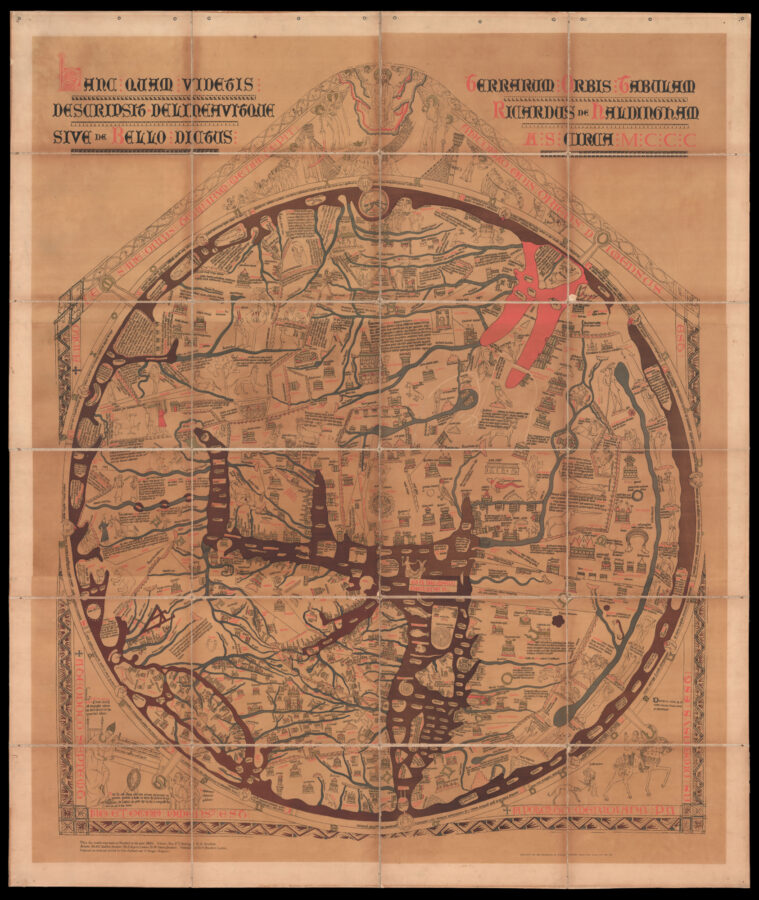 Rare one to one facsimile of the largest extant medieval mappa mundi.

Medieval world maps (or mappae mundi) were not designed with geographical accuracy in mind, but to illustrate Judeo-Christian beliefs and Classical geographical concepts. They ranged from the purely diagrammatic climate zone maps based on the work of Macrobius; and the ​“T‑O” maps designed to illustrate the three land masses (Europe, Asia, and Afica) of the world as it was known from classical texts; to the often monumental maps, such as Hereford’s ​‘Mappa Mundi’ (the present facsimile), which although employing the general layout of a ​“T‑O”, provided considerably more geographical content, together with illustrations of biblical events, fabled beasts, and peoples. What such maps have in common is their circular form. This not only reinforced in the viewer the sphericity of the earth, but was also intended to represent the harmonious order of God’s creation. Using regular geometric Platonic forms such as circles, triangles, and spheres, which were regarded as divine, they created a coherent planispheric system, which combined both the geographical and the heavenly world. The role of the medieval ​“mappa mundi” in the evolution of cartography was, in part, therefore, the popularization of this image of the world, but also, perhaps more important, as inspiration for the early voyagers – the received wisdom that Paradise lay in easternmost Asia, reflected in medieval maps being orientated to the East, certainly spurred Columbus to write, on his third voyage, that they were near ​“the Earthly Paradise… where no man may go, save for by the grace of God”.

Created in around 1300 CE on a single piece of vellum, and measuring 158 by 133cm, the work was originally attributed to Richard Haldingham, although this is now thought unlikely. The map has for most of its life, lived in relative obscurity. Originally hung on the choir aisle of Hereford cathedral; it was hidden under Bishop Audley’s Chantry during the Civil War and Commonwealth period. In 1855 it was cleaned and repaired by the British Museum. During the Second World War, for safety reasons, the mappa mundi and other valuable manuscripts from Hereford Cathedral Library were removed from the cathedral and returned to the collection in 1946.

In 1988, a financial crisis in the Diocese of Hereford caused the Dean and Chapter to propose selling the mappa mundi. After much controversy, large donations from the National Heritage Memorial Fund, Paul Getty and members of the public kept the map in Hereford and allowed the construction of a new library to house the map and the chained libraries from the Cathedral and All Saints’ Church. The new Library Building in the south east corner of the cathedral close opened in 1996

The present facsimile was produced soon after the restoration carried out by The British Museum in the 1855. A note to the lower left margin reads:

In 1873, a monograph to accompany the facsimile was published: ​‘Mediaeval Geography. An Essay in illustration of the Hereford Mappa Mundi’, edited by the Rev. W.L. Bevan. The work provides a list of 116 subscribers, and gives a detailed account of medieval cartography; the authorship and production of the map; and a discussion of the maps, classical, biblical, and medieval content. Only around half of the subscribers took up the opportunity to purchase the facsimile, making the present work particularly rare. 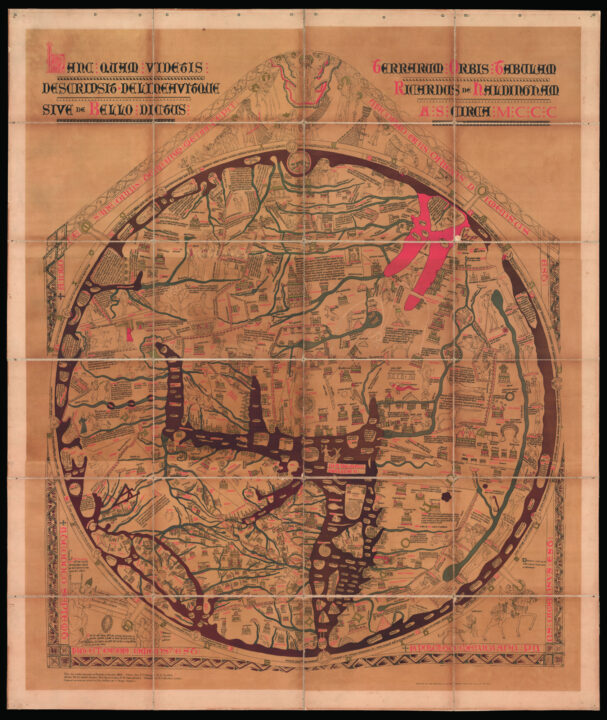