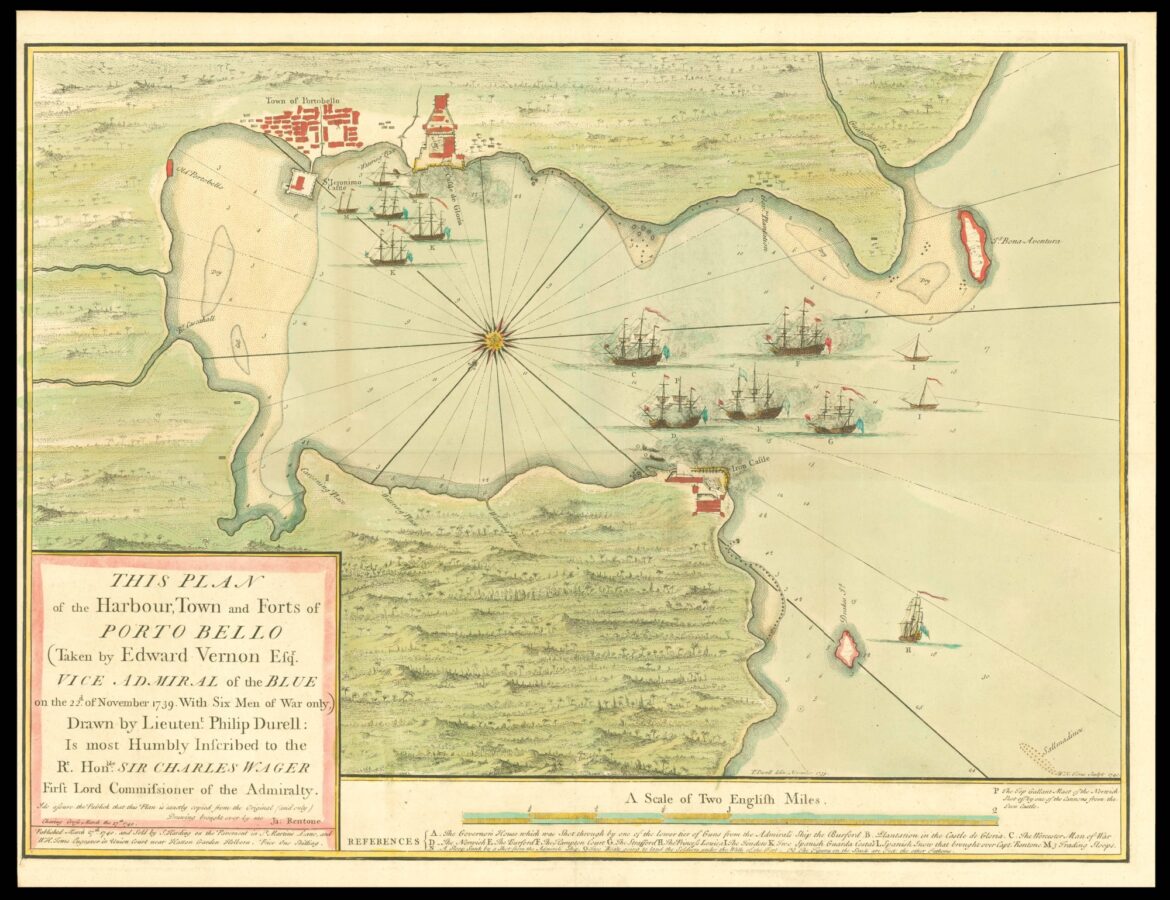 The greatest British success in the War of Jenkin’s Ear

This Plan of the Harbour, Town and Forts of Porto Bello…

Philip Durrell (1707–1766) was a British naval officer. He rose to the rank of Vice Admiral over a stellar career, participating in important naval victories including the Siege of Louisbourg in 1745, when a British fleet captured the city in the War of the Austrian Succession. This map was drawn when he was still a Lieutenant, serving under Admiral Vernon during his command of Jamaica during the War.

Porto Bello was an important stronghold in the Caribbean, and a point of departure for Spanish bullion ships. Admiral Vernon took part in a failed attempt to stop a Spanish treasure fleet sailing from Porto Bello in 1727, and subsequently claimed that he could take the port with just six vessels. He was given the Jamaica command, and launched an expedition to Porto Bello in 1739, occupying the town for three weeks and rendering the key buildings unusable, destroying it as a viable port for Spanish ships. The British accomplished the occupation with only three lives lost. The resounding success of Porto Bello was welcomed throughout Britain and British America. The Portobello districts in London, Edinburgh and New York are named after the victory; Mount Vernon, the home of George Washington, was named after Vernon. Durrell’s map provides an eyewitness account of this famous victory.

The map is a clear and detailed portrayal of the entrance to the port. Because of the wind, Vernon was forced to focus the attack on the harbour fort, labelled here as the Iron Castle. It is shown in flames with the British warships firing on it, as is the Castle de Gloria on the other side of the bay. Durrell’s carefully numbered key shows the position of the British and Spanish, and the ships which were taken or destroyed.

Dedicated to Sir Charles Wager, First Lord of the Admiralty from 1733 to 42, who was partially responsible for appointing Vernon to his command.