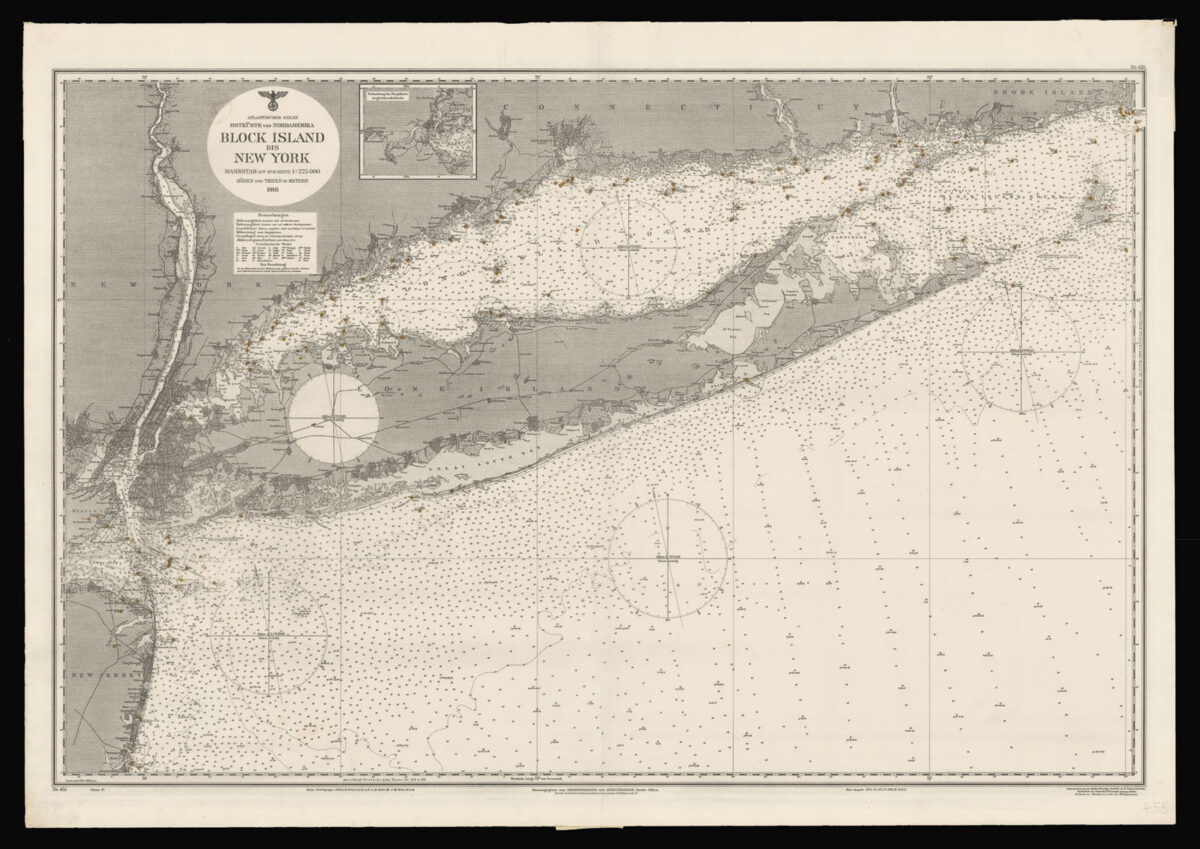 The German War on America, WWII

By KRIEGSMARINE; and Richard ENDERLICH, 1943

First issued by the Herausgegeben von Oberkommando der Kriegsmarine, Berlin, in September of 1916, with new editions published in 1923, and 1940; this example was reissued in March of 1943. The Kreigsmarine, the German wartime equivalent of the British Admiralty, and the U.S. Geographical Survey produced a comprehensive series of maps of the coastlines of the world. This particular map of Long Island and the approaches to Manhattan is particularly rare, with only one institutional example found: at the Beinecke, Yale.

During World War I, the Germans had led a successful attack on the munitions warehouses of Black Tom Island, near Jersey City, when saboteurs set off an explosion on July 30th, 1916, which registered 5.5 on the Richter scale, killing five people, ​“jostling the Brooklyn Bridge, shattering plate-glass windows six miles away and shaking building foundations in five states” (NYTimes online).

Twenty-six years later, once the US had officially entered WWII, after the Japanese attack on Pearl Harbour, the Germans tried again. Operation Pastorius, planned for June of 1942, and carried out by longtime German residents of the US, included among its targets Hell Gate Bridge in New York and Pennsylvania Station in Newark, New Jersey. Four saboteurs came ashore at Amagansett, Long Island, on the night of June 12th, 1942, brought there by U‑Boat 202. One of their number was discovered, and the munitions and other equipment he had buried in the dunes, seized. When the same operative gave himself up to the FBI the mission came to nothing.

In the wake of the failure of Operation Pastorius, two more German spies were landed at Frenchman Bay in the Gulf of Maine by U‑Boat 1230, as part of Operation Elster, purportedly to gather intelligence on the Manhattan Project, to sabotage it, and gather what other information they could on shipyards, airplane factories, and rocket-testing facilities.

Rare: no examples appear in auction records; only one institutional example, at the Beinecke Library, Yale.

with the ink stamp of the Third Reich upper left.