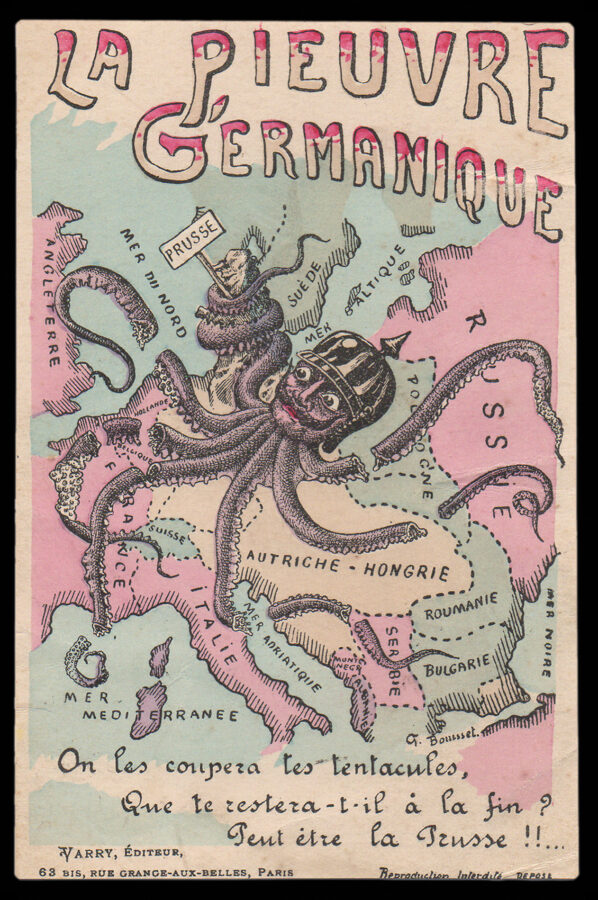 A French cartoon map of Europe, mocking the ambitions of Kaiser Wilhelm II by showing him as an octopus. Upon taking his throne as Kaiser of the German Empire and Prince of Prussia, Wilhelm promptly worked to remove the chancellor Otto van Bismarck, who had essentially ruled Germany since the 1860s. The foreign policy decisions made under his rule are usually seen as disproportionately affected by his personal prejudices, although later evidence suggests that his views were shared and encouraged by the German upper and middle classes. However, Wilhelm’s behaviour — taking the title of Supreme War Lord, supporting resistance to British and French rule in South Africa and Morocco respectively, trying to encourage Nicholas II to break the Franco-Russian Alliance — gave him a power-hungry reputation in France. The cartoon shows him as an octopus in a Prussian spiked helmet, reaching into all the countries around him. The caption dismisses his efforts, reading:

When we cut the tentacles,
What will you be left at the end?
Perhaps Prussia!

It implies that after the Kaiser’s misguided attempts at asserting Germany’s power in Europe have been curtailed, the only territory he will have is his original kingdom of Prussia, coiled securely in his only uncut tentacle. The trope of the evil, land-grabbing, octopus was common in propaganda maps at the time.