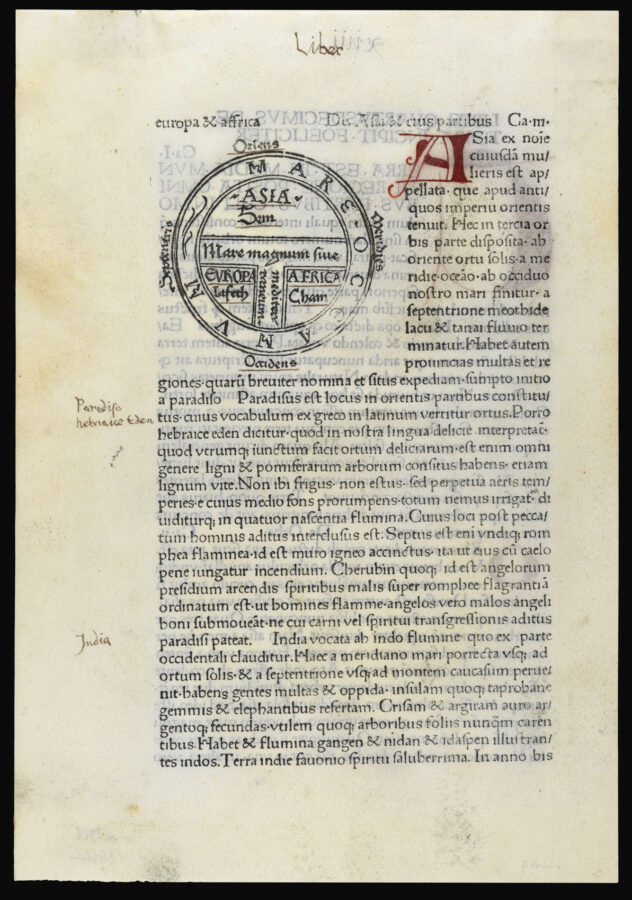 “Arguably the most iconic map ever made”, from ​‘Etymologiae sive originum libri XX I’, by Isidore of Seville (Suárez). The work circulated in manuscript for centuries before this edition was printed in 1472 by Gunther Zainer in Augsburg, with the groundbreaking addition of four woodcut diagrams.

Zainer’s decision to add woodcuts to his publication — a decision that was originally opposed by the guild of woodworkers in Augsburg until Zainer contracted only to use guild members for the work — made it the ​“first expression of geographic knowledge disseminated by the new medium of printing” (Suárez). Manuscript copies of Isidore’s text contained diagrams, but Zainer’s edition was ​“the first printed map of European origin of certain date, and the first in a printed book” (Suárez).

The map is drawn on a T‑O projection: a common projection for mappamundi in which the three known continents of Asia, Europe and Africa are shown within a circle (‘O’) divided by the horizontal Mediterranean Sea and the vertical River Nile (‘T’). In this map, however, all the waters of the ​‘T’ are labelled as ​“Mare magnum sive mediterraneum” (“Great Sea or Mediterranean”). The ​“MARE OCEANVM”, or ​“Ocean Sea”, surrounds the whole of the Earth in accordance with medieval and ancient precepts. The three known continents are labelled with the name of Noah’s three sons, their Biblical settlers: Sem in Asia, Cham in Africa, and Japhet in Europe. Outside the circle the four basic directions are marked; Oriens and Occidens are of course East and West (for the rising and setting sun), North is Septentrio (the number seven, for the seven plow-oxen stars of the Great or Little Bear) and South is Meridies (for the position of the sun at midday).

Zainer’s illustration was not only an historic moment in European cartography, but also represents the ideas that led to the discovery of the New World. It is unclear whether the T‑O projection was meant to represent a flat or spherical earth, and it could probably be interpreted either way. Within the text, however, Isidore supports the idea of a spherical earth, which was the reason for Columbus’ conviction that he could reach Asia by sailing west from Europe.

The ​‘Etymologiae’ also suggests that Paradise could be found at the easternmost point of Asia: ​“the Lord planted a garden Eastward in Eden… and he placed at the East of the Garden of Eden, Cherubims, and a flaming sword, which turned every way, to keep the way of the Tree of Life”. Columbus clearly thought along similar lines. The ultimate aim of his voyage Christian control of the Holy Land, and on reaching South America on his third voyage he proclaimed himself near ​“the Earthly Paradise… where no man may go, save for by the grace of God”.

Isidore of Seville, known also as Isidorus Hispalensis (c560-636) was bishop of Seville from around 599 until his death. An avid student of both Christian and Roman sources, his ​‘Etymologiae’ (622–633) was an indiscriminate and uncritical compilation of diverse texts which Isidore himself sometimes did not appear to understand. It was perhaps because of the book’s ambiguities and contradictions, rather than in spite of them, that manuscripts of the work maintained a wide appeal and remained a standard encyclopedic text throughout the Middle Ages. However, ​“Isidore was deeply admired by his contemporaries for his scholarship and intellectual gifts. Although their praise for his Greek and Hebrew is perhaps unmerited, the breadth of his learning is nonetheless impressive. He was happy to draw on pagan authors as well as Church Fathers, and was familiar with works as various as Martial’s ​‘Epigrams’, Tertullian’s ​‘On spectacles’, and Pliny the Elder’s ​‘Natural History’. In spite of the demands of his episcopal office, Isidore nevertheless found time to produce a substantial body of writing”. (Barney ​‘The Etymologies of Isidore of Seville’, page 7).