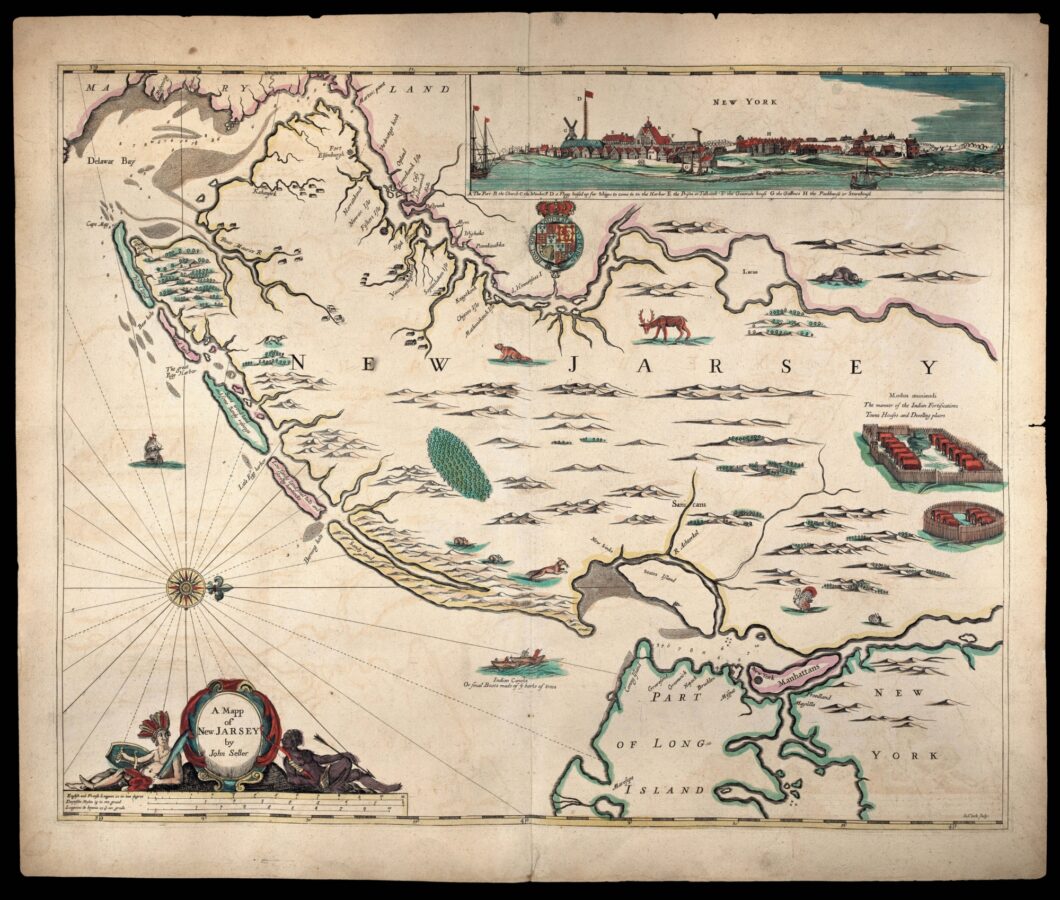 The first state of Seller’s map of New Jersey

A Mapp of New Jarsey.

The rare first state of Seller’s separately published map of New Jersey, with the imprint of the engraver ​“Ja. Clark sculp.” lower right, the view of New York upper right, and without the large dedication and arms of Carteret, or subsequent additions. Some examples have been found in his ​‘Atlas Maritimus’ of 1675, possibly including this one, but generally it is not expected to be present. It shows the whole of New Jersey from the Delaware to the Hudson, with part of Long Island, and Manhattan. It includes the first engraved view of New York upper right. The title is in a cartouche at the lower left.

The colony of New Jersey was founded on 24 June 1664. James, Duke of York, had been granted the land by his brother, Charles II, but he proceeded to bestow the land between the Hudson and the Delaware Rivers on John Berkeley and Sir George Carteret. In recognition of Carteret’s loyalty to the King during the Civil War as Lieutenant Governor of the Island of Jersey, it was called ​‘New-Caeserea of New-Jersey’. Following the brief ​‘Restitution’ of the area to the Dutch, between August 1673 and February 1674, Berkeley consigned his share of the colony to two Quakers, John Fenwick and Edward Byllynge. Seller’s map is based on Augustine Herrman’s map published shortly thereafter, in March 1674, of ​‘Virginia and Maryland’ (Burden).

The middle of New Jersey and the Upper Delaware River are derived from the earlier map ​‘Novi Belgii’ published by Nicolas Visscher c1655. The region of New York and its harbor is derived from an unknown source. No Newark Bay is depicted and an unnamed Passaic River runs north-west.

One of the main features of Seller’s map is the famous view of New York. When it first appeared on Visscher’s map, it was ​“only the second English view of the town, the first being a small engraving set within the text of John Ogilby’s ​‘America’ published in 1671. Carto-bibliographers have claimed that the Seller map is the first view to be called New York. It can most probably be assumed that the map was published after March 1674, the date of issue of the Herrman map. The second state of Hugo Allard’s ​‘Novi Belgii’, first published in c1662, glorified the restitution of New Amsterdam to Dutch control by bearing the ​‘Restitutio’ view naming ​‘Nieuw jorck’. This was clearly published before news of the return of the colony to England in February 1674. Thus, the probability is that the Allard map pre-dates the Seller in this regard” (Burden).

Other features include a large compass rose with radiating rhumb lines, sea banks or shoals, and soundings. Native American settlements, fortifications, and dwellings are shown; canoes, a stag, beaver, fox, beaver and turkey are illustrated; the royal coat of arms of England, ships, gallows, a windmill, a church, and a prison are depicted. The title cartouche is flanked by native Americans, one wearing a feathered head-dress and holding a sword, the other holding a bow and arrow.

John Seller (c1632-1697) is one of the most important figures in English map-publishing, but his reputation has suffered at the hands of later critics.

He was a mapmaker, chartmaker, compass-maker and mathematical instrument-maker; an author, mapseller, bookseller and globeseller and cartographic publisher, successively Hydrographer to Charles II and James II.

His greatest legacy was a series of chart-books to be published under the heading ​‘The English Pilot’, covering all the navigations of the world from 1671 to 1675. By the fifth volume, it seems that Seller’s ambitions had exceeded his resources; by 1677 Seller had taken William Fisher, John Thornton, John Colson and James Atkinson into partnership. The partnership was short-lived, and several titles passed out of Seller’s hands.

In the meantime, Seller was publishing the ​‘Atlas Maritimus’, the first English sea-atlas published to compete with the Dutch, using plates from the ​‘English Pilot’ and others from his general stock. He also announced plans for a new survey of the counties of England and Wales, with several maps prepared on two sheets, and single-sheet reductions made to be assembled as an atlas; the project failed, and only two copies of the atlas, mocked up as sample books survive, although later printings of the maps are known.

Seller had an important output of separately published maps, notably his map of New Jersey (1674), the present map, New England (1676) and a pair of celestial charts, the Southern Hemisphere drawn by Sir Edmund Halley (1678).

Rare. Examples of the first state are found in the ​‘Atlas Maritimus’ at Harvard, and separately at the John Carter Brown Library, Library of Congress, New Jersey Historical Society, New York Public Library, Yale University, and the British Library. We are only able to trace one example appearing at auction in the last 35 years; in an example of Seller’s ​‘Atlas Maritimus’, in 1986.