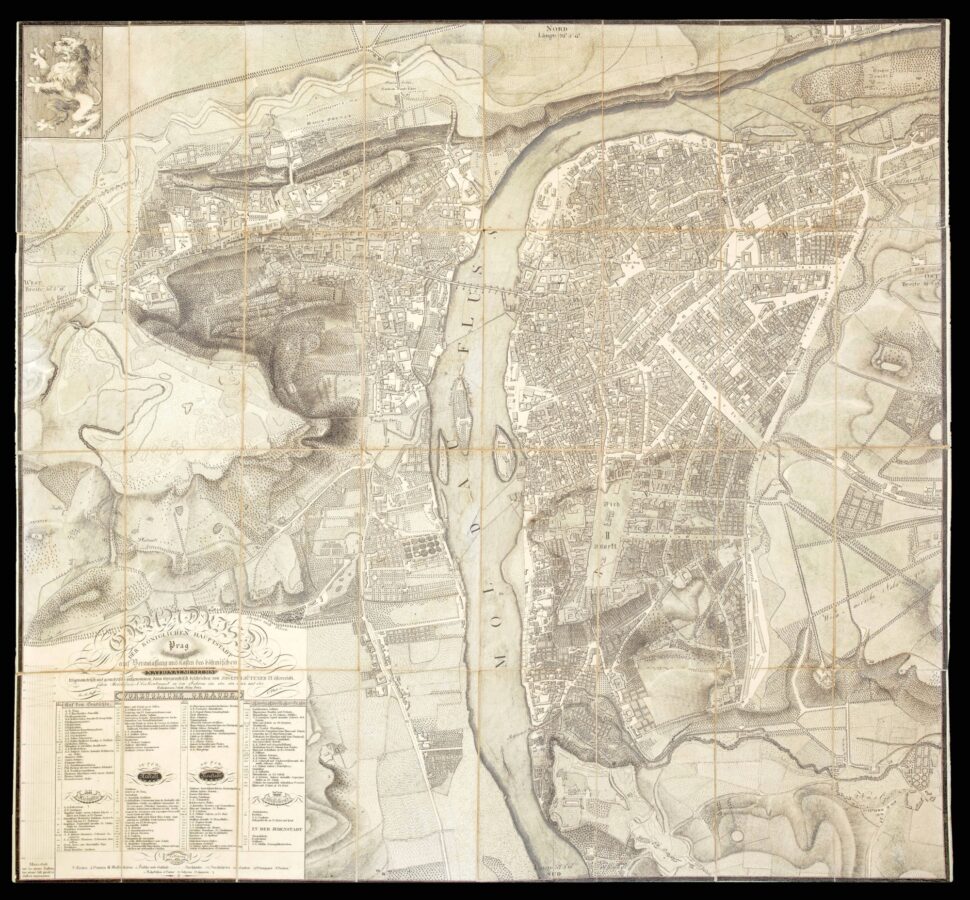 Rare large scale plan of Prague published at the beginning of the nineteenth century offering the first scientific record of the city on the cusp of the industrial revolution. Prague was the capital of Bohemia and served as a central seat of power for the Austrian Empire. The city teemed with culture, commerce and intellect and was beginning to outgrow the medieval city limits. Most of the city sits on the right bank of the Moldau River with the Charles Bridge spanning the river to the left bank with its iconic Prague Castle.

In 1812, Emperor Francis I commissioned a scientific survey of Prague from Joseph Jüttner, an accomplished artillery officer and mathematics teacher. Jüttner was already in the process of carrying out trigonometric calculations in the city with his students, which he used to create a trigonometric network for Prague and the surrounding areas. With the commission underway, Jüttner employed extensive resources to complete the survey and produce the full-scale plan, including liaising with Martin Alois David on astronomical measurements. Progress was interrupted due to the ongoing Napoleonic Wars and delayed completion when Jüttner had to move his base to Mayence.

Juttner prepared and published a trigonometric plan this project. The Prague Observatory is at the centre of the map and distances to various churches, monasteries, and inns are indicated throughout the map. Notable landmarks including St. Ignatius Church appear on the map as a triangulation point.

By 1819, Jüttner produced a finished plan in manuscript form with one copy for the Emperor and a second for Count Kolowrat, the Supreme Burgrave of Bohemia. Kolowrat authorised the publication of the plan, but due to military intervention all the details of the fortifications around the city are omitted. Although lacking details of these fortifications, the rest of the plan was incredibly granular, with depictions of each building and associated house numbers, topographical detail and city borough boundaries. The plan was published by Franz Hoffmann in 1820, but due to its large size and significant costs, it did not become commercially successful. It did however serve as the basis for many maps in the following decades and was regarded as the most important plan of the city in the nineteenth century.

Rare. We are only able to trace two examples in public collections.