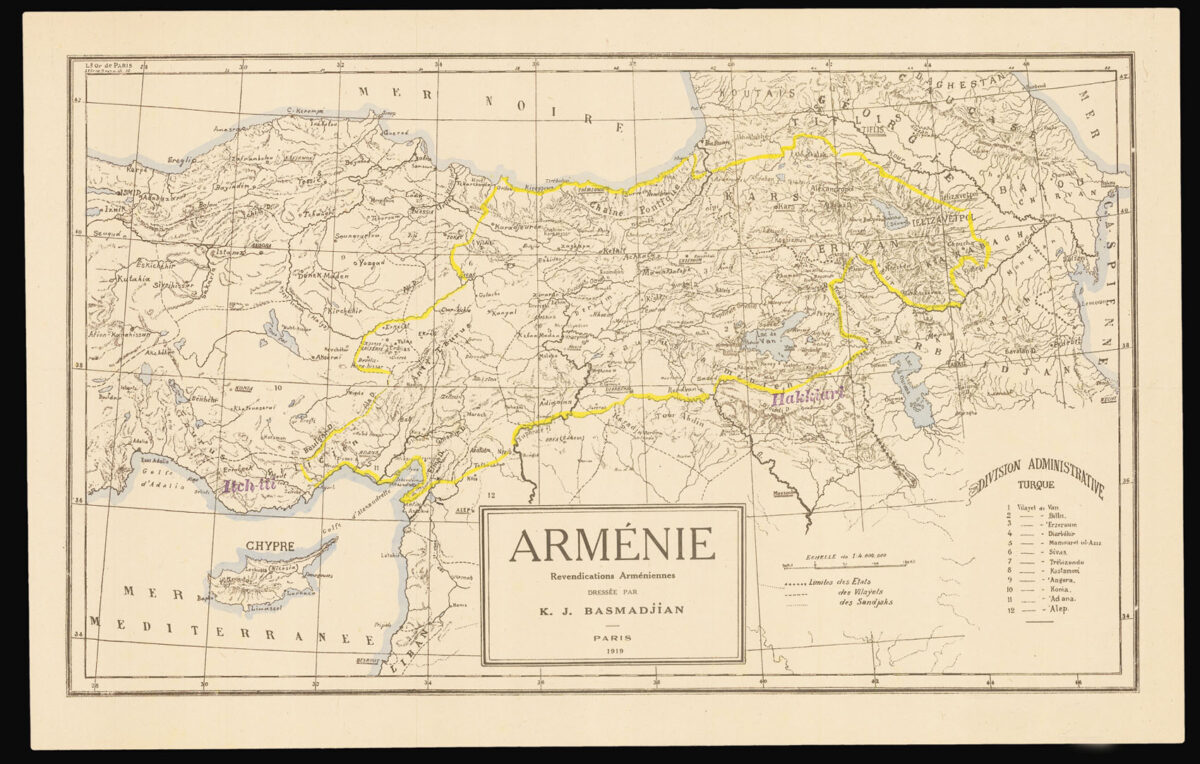 The First Republic of Armenia claims its ancient territories

This separately issued map was created as a propaganda tool to advance the territorial claims of the First Republic of Armenia in the run up to the Treaty of Sèvres in 1920, where the Western Allied Powers were to set the country’s new borders: the extent of the territorial claims made by the Republic are shown by the yellow border. The map was presented by the Armenian National Delegation at the Paris Peace Conference, and shows Armenia extending from the south-central Black Sea coast to the Caspian Sea and from the Mediterranean Sea to Lake Urmia in present-day Iran. These claims were unrealistic, although based on pre-fourteenth-century Armenian Kingdoms, as some areas now had larger Turkish or Kurdish populations than Armenian.

During its long history, Armenia was formerly and variously divided among Russia, Turkey and Persia. After the Bolshevik Revolution, the Armenians of the Russian portion of their country succeeded in establishing the Armenian Republic of the Caucasus, with its capital at Yerevan.

In the generations leading up to WWI, a large proportion of Armenia was under Turkish domination. During WWI, as the Ottoman Empire began to fall, Turkish leadership targeted the Armenian population as a scapegoat for their own frustrations which led to the Armenian genocide of 1915.

Due to the collapse of the Ottoman Empire at the conclusion of WWI, Armenian expectation was the freeing of their provinces from eastern Turkey, and the reconstruction of an Armenian State along the same principles as had established Poland. The portion of Armenia lying within the former Russian Empire declared independence on May 28, 1918, as the First Republic of Armenia: Armenians had their own sovereign state for the first time since 1375.

Under the Treaty of Sèvres, 10th August, 1920, a pact between the Allies and Ottoman Turkey, for which this map was prepared, the Ottoman Empire was abolished and Turkey was obliged to renounce all rights over Arab Asia and North Africa. The pact also provided for an independent Armenia, for an autonomous Kurdistan, and for a Greek presence in eastern Thrace and on the Anatolian west coast, as well as Greek control over the Aegean islands commanding the Dardanelles. In 1920 the new republic of Armenia was invaded by forces from Turkey and Soviet Russia; the Soviet Republic of Armenia was established on November 29, 1920; in 1922 Armenia became part of the Transcaucasian Soviet Federated Socialist Republic; and in 1936 this republic was dissolved and Armenia became a constituent (union) republic of the Soviet Union. Armenia declared sovereignty on August 23, 1990, and independence on September 23, 1991.

The map was prepared by Karapet Basmadjian (1864–1942), renowned Armenian historian and a vocal advocate of an independent Armenia, based in Paris. Importantly the map shows Armenia’s claims to Cilicia: ​“Cilicia must be restored to the Armenians. Neither the Caspian Sea nor the Black Sea can serve as a substitute for the gulf f Alexandretta, called Armenicus Sinus, — Armenian Gulf, — from as early as the fourth century, which for three centuries enabled the Armenians to maintain constant intercourse with Europe. It was through the Cilician port of Ayas that Europe, until the Middle Ages, exported its merchandise to Armenia. During an entire century, when the ports of the Levant were held by the Mussulmans, the merchant vessels of the Occident, for fear of being attacked by the Mussulmans, preferred to call at the port of Ayas. Here the Armenians received with open arms the European ships and grated them great privileges” (Basmadjian, The New Armenia, volume 12, November-December, 1920, page 169).

Basmadjian was born in Constantinople in the Ottoman Empire, and during the 1890s he was held for three years as a political prisoner in Constantinople’s notorious Mehter Khane prison, during which he wrote a book about cuneiform inscriptions, the first such book written in Turkish. After his release Basmadjian migrated to France. He is the author of” Histoire moderne des Arméniens”, Paris 1917 and 1922, both accompanied by a much smaller folding map.

Rare: examples of this separately issued map are located at the Bibliotheque Nationale France and at UC at Berkeley; 8 examples of the map folded within pamphlets about the Armenian treaty claims are known. There also appear to be no sales records for the pamphlets or the separate map.