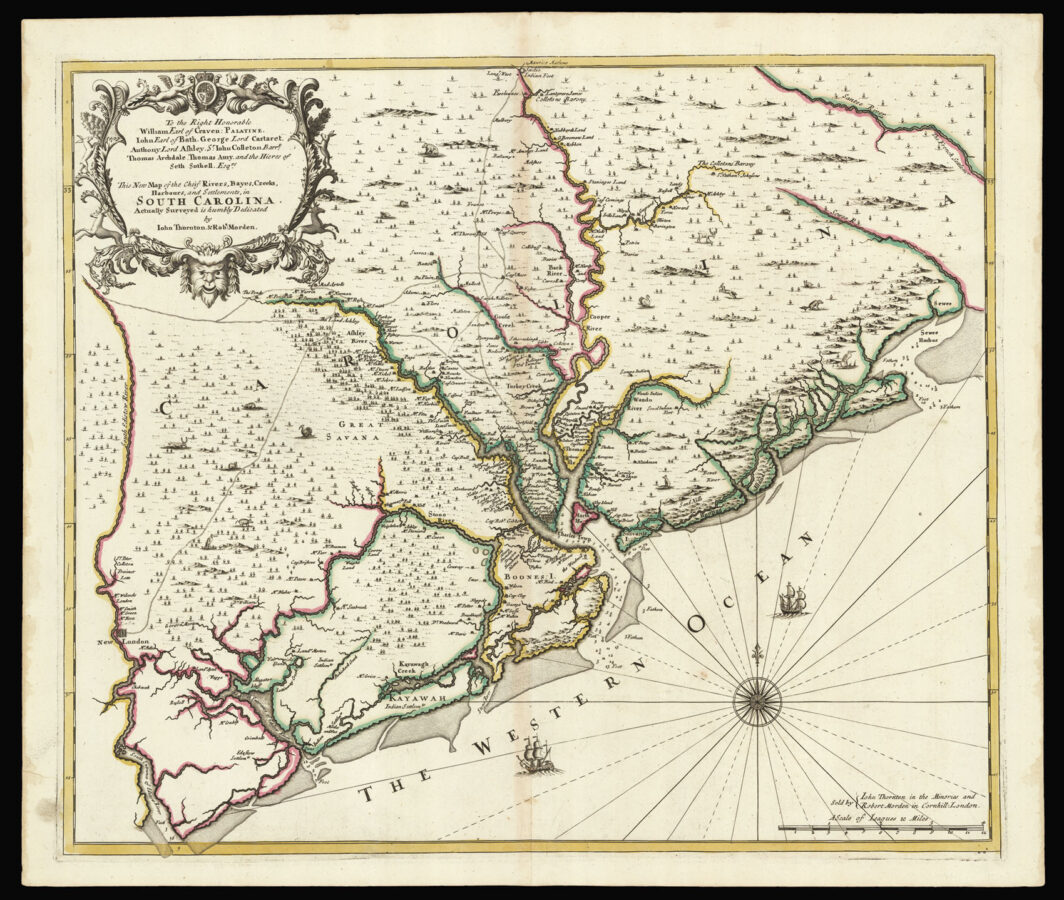 The first printed map to show and name South Carolina

This New Map of the Chief Rivers, Bayes, Creeks, Harbours, and Settlements, in South Carolina.

A superb map of South Carolina focused on the developed region around Charleston, reaching southwards to the South Edisto River and North to ​“Sewee Harbor”. Previous printed maps of the region included Northern Carolina, and it was not, in fact, until 1730 that North and South were formally separated.

Published by John Thornton and Robert Morden the map is derived from Maurice Mathews’ (died 1694) comprehensive survey as depicted in Joel Gascoyne’s (born 1650) manuscript map ​“A Plat of the Province of Carolina in North America, the South part actually surveyed by Mr. Maurice Mathews”, c1680, housed in the British Library. Mathews provided the cartographic background in the Charleston region for the Gascoyne map, although he is known less for his cartographic professionalism than for the detail he provided. He arrived in Carolina as a planter and being well connected in England became Lord Ashley’s deputy in 1671. Made a member of the council, he soon displayed his capabilities, and became the Surveyor General in 1677.

For Gascoyne’s published map of c1682, ​“A New Map of the Country of Carolina. With its rivers, harbours, plantations, etc”, Mathews has provided many more plantation-holders names, some 250, and much greater detail along the coast to the south, both elements of which feature in this map.

Gascoyne was originally apprenticed to JohnThornton, a friendship that no doubt allowed his map to pass to Thornton. The latter had worked before with Morden on other maps, most notably the large multi-sheet map of 1685. Morden’s ownership of the plate with Thornton prevented the map passing to John Senex, unlike his maps of the ​“English Empire”, c1698, and the Chesapeake Bay region, c1692. These were held in joint ownership with Christopher Browne.

The Gascoyne’s original manuscript is large, about 1270 x 1580 mm, and covers a wider area.Thornton and Morden focused more on the region of Charles Town, allowing most of the detail to be transferred. Some new and independent sources are used, especially in indicating settlements. A French village is noted on the Santee River, and an Indian one to the south on ​“Kayawah” Island, and further south still, ​“Edestow Settlemts”. Sullivans Island is called ​“Silivants I.” The whole is traversed with a number of roads.

The map was copied by many cartographers, the first being Pierre Mortier in 1700. Other derivatives include Edward Crisp’s ​“Carolina”, 1711, and Herman Moll’s ​“Dominions of the King of Great Britain”, 1715.” (Burden).