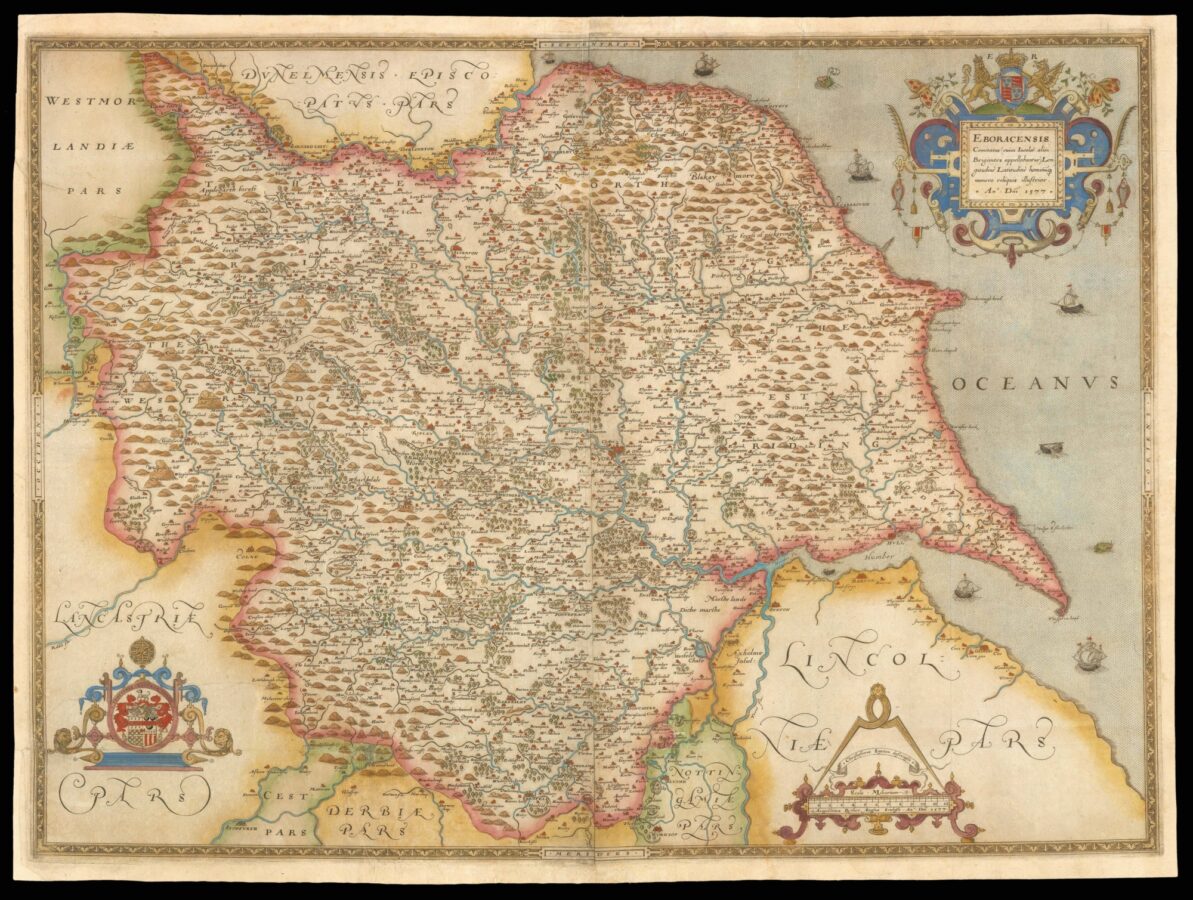 The first printed map of Yorkshire

In 1575, Christopher Saxton was authorised by the Queen’s Privy Council to survey and map the counties of England and Wales, a task which he had completed by 1579, when the resulting maps were compiled and published in his seminal ​‘Atlas of England and Wales’. This is the first full map of Yorkshire ever produced, depicting the cartographer’s home county with its settlements, rivers, moors, forests, parks and hills illustrated in detail. The vast area surveyed by Saxton presents a land of contrasts, with the larger, labelled hills in the East giving way to the flatter landscape of the central county, dominated by the estates of the local gentry. Larger towns such as Scarborough and Hull are identified as a collection of buildings, while the most prominent city, York, is depicted with a small but intricate figure of York Minster. Areas on the coast, and at the mouth of the Humber, receive particular attention due to the threat of naval attack which was a constant and unwelcome presence during the reign of Elizabeth I. The Secretary of State, Lord Burghley, played an important role in Saxton’s commission and took a keen interest in the production of his county maps, which he then used for administrative and defensive purposes. On his own personal proof copy of the Yorkshire map, Burghley added his own annotations, in particular a line drawn from Hull to Welton, perhaps influenced by the military importance of Hull, whose fortifications were reinforced around the same time.

The county name, in Latin, is contained within an elaborate cartouche in the upper right corner, intricately decorated, boldly coloured in blue, and surmounted with the royal coat-of arms. Below this, at the bottom of the map, the heraldic crest of Saxton’s patron, Thomas Seckford, is featured on the left, also held within an ornamental cartouche, while on the right the map’s scale is accompanied by two banners, which identify Saxton as the cartographer and Augustine Ryther as the engraver. The map of Yorkshire is the largest of the 34 county maps included in Saxton’s ​‘Atlas of England and Wales’, due to the fact that it combines all three Ridings. Legal documents from the early seventeenth century record that Saxton was called to testify to the accuracy of his Yorkshire map in court, which he did on the basis that it had been granted the royal seal of approval. Additionally, like all the maps in his atlas, this map bears the cartographer’s watermark, a bunch of grapes, to identify the work as original.